Asthma and the respiratory microbiota: a close relationship

Asthma is considered a major public health issue. Since the end of the 20th century, there has been an increase in the prevalence of this condition which affects all generations, and particularly children. The disease causes varying degrees of respiratory difficulties depending on severity. Fortunately, there are treatments for acute attacks and disease-modifying treatments, which provide asthma patients with a better quality of life. This chronic inflammation of the bronchi has a multifactorial etiology: genetic, immunological and environmental. There are more and more breakthroughs in this growing research area, in particular with regard to the role of the different microbiota that are potentially involved–pulmonary, nasal, intestinal–in the onset and course of the disease. The first results allow new preventive and therapeutic avenues to be considered in the coming years.

The respiratory system of healthy individuals has been disregarded for a long time as it was assumed to be sterile. However the lungs in particular have proven to contain a wealth of bacteria. Studies increasingly implicate these bacteria in the development of asthma. Their objective is to identify new therapeutic avenues.

Although the intestinal microbiota has been the subject of many studies in recent years, the other microbial communities (respiratory, among others) have not attracted the curiosity of researchers to the same degree. And for good reason! Thinking it to be sterile in healthy individuals, scientists excluded it from their field of study. This preconception was shattered in 2010 through the use of new cutting-edge genetic analysis techniques1 : since then it has been established that bronchi and lungs of healthy individuals naturally host a true bacterial flora (mainly composed of Proteobacteria, Firmicutes and Bacteroidetes) which protects them against infections and allergies. Like the intestinal microbiota, this flora interacts continuously with the immune system. This discovery is an important step towards understanding the respiratory microbiota, whose role in pulmonary immunity is still poorly known and which is complex to study since its composition can vary according to sample quality and type (sputum, aspirate, bronchioloalveolar lavage…).

From birth2, the respiratory microbiota is shaped by multiple factors: climate, geographical area, habitat, cohabitation with farm or domestic animals, mode of delivery, antibiotic intake before the age of two years. To this list is added any intake of antibiotics by the mother up to twenty-one months before the birth, and diet… Overall, the improvement in living conditions in developed countries saves lives but on another note contributes to the progression of asthma3. The development of hygiene in particular disrupts maturation of the immune system due to restricted contact with microbes. To understand the impact of the respiratory microbiota on the immune system and the occurrence of asthma in greater detail, researchers triggered an microbial imbalance –otherwise known as dysbiosis–in newborn mice, by exposing them to allergens at a very early age4 (in this case dust mites). As a result, the development of their immune system was disrupted and its functions were impaired, two factors that favour the occurrence of more or less long-term allergic asthma.

Although this does not transfer accurately to humans, it is however known that colonization by certain bacteria before the age of one year can cause infantile asthma, and at least, persistent respiratory wheezing5. According to other studies6, the respiratory microbiota of healthy individuals is different from that of asthmatics, both in terms of abundance and diversity (particularly a decrease in Bacteroidetes and an increase in Proteobacteria in asthmatics). This difference depends on the severity of asthma, which may be mild, moderate, or severe. Unexpectedly, contrary to observations made in other diseases, the respiratory microbiota is more abundant and diversified in a case of moderately severe asthma than in a healthy individual. The flora of an individual with severe asthma, suffering additionally from severe bronchial obstruction is less diversified than that of an individual also with severe asthma but who does not have any obstruction. The relationships between microbiota and asthma exacerbation (prolonged attack), often associated with viral respiratory infections, remain to be identified. 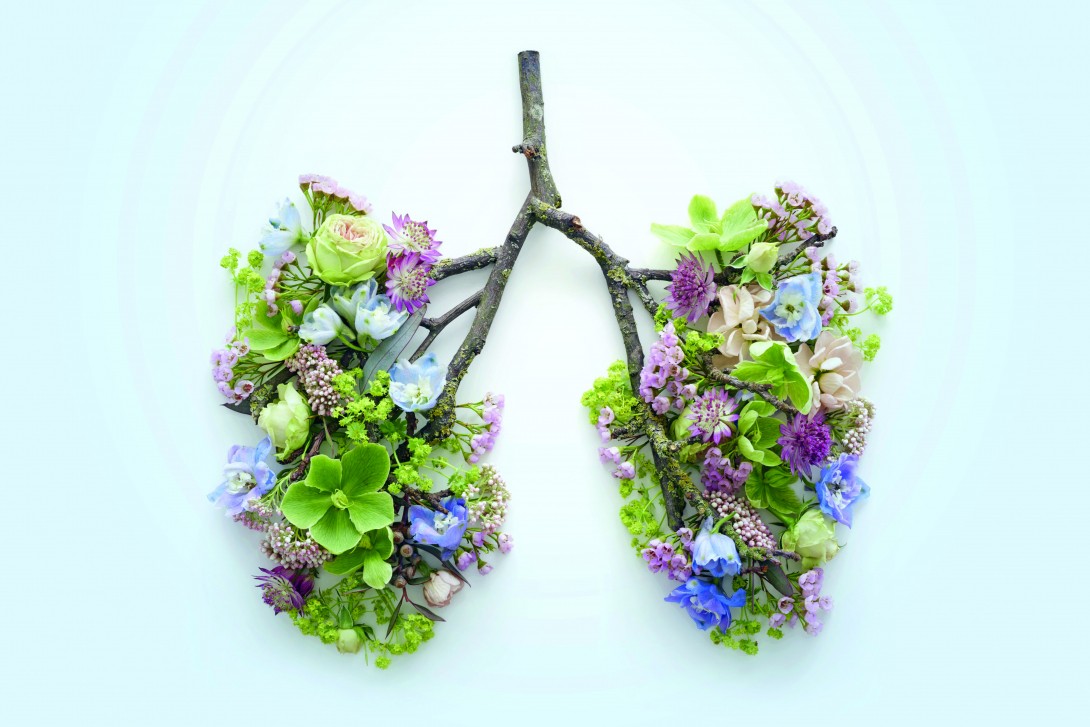 The causal relationship that is now accepted between an imbalance of the respiratory microbiota and the occurrence of asthma–even if it is not yet known whether the dysbiosis is the cause or the consequence–opens new avenues for reflection. These could lead to new strategies for the prevention and management of this disorder, which according to the WHO, is underdiagnosed and undertreated7 . This is particularly the case in the elderly if the onset of the disease occurs after the age of sixty: the concomitant presence of other age-linked disorders makes diagnosis difficult8. Prebiotics and probiotics, which interact with the intestinal flora, could help regulate the immune response even if the relationship between these two microbiota themselves still needs to be better understood. An antibacterial treatment –or even a transplant of respiratory microbiota as is done successfully with intestinal microbiota–could help preserve and/or restore the respiratory flora and oppose or restrict the development of asthma. These hypotheses will require confirmation by future studies but the numerous possibilities are promising.

235 million cases across the world (WHO estimate)

Almost 63,000 hospitalizations in France taking all ages together, ⅔ of which involve children under 15 years old (Source: Santé Publique France)

Asthma
Allergies: the role of microbiota
Secrets of the nasal flora
Focus