Role of the intestinal epithelium and the innate immune response

The dysbiosis observed in IBD could be related to an alteration of the gut epithelium, which is no longer able to play its barrier role, as well as to a dysregulation of the local innate immune response that promotes inflammation. Explanations and focus on antimicrobial peptides.

The alteration of the intestinal barrier observed in patients with IBD could explain the pathophysiology of dysbiosis: not only would this mechanical frontier be altered, but also its first line of immune defense.

Besides its role in the absorption of ions, water and other nutrients, the intestinal barrier serves as a wall and prevents the entry of bacteria into the gut lumen. But its permeability increases in acute phases of Crohn’s disease (CD), which promotes translocation of bacteria through the mucus as well as local inflammation5.

The role of the instestinal barrier

Potential causes: alteration of the tight junctions of intestinal epithelial cadherins (glycoproteins playing a key role in intracellular adherence); involvement of some transcription factors11 related to epithelial regeneration. Other mechanisms under discussion involve the gut mucus, whose thickness keeps pathogenic bacteria at bay, but which is considerably decreased in patients with IBD. This phenomenon could be explained by the alteration of mucus- producing goblet cells whose disruption induces the development of colitis in murine models. It could also be explained in patients with CD by the impairment of Paneth cells located at the bottom of small intestinal crypts, known to be involved in homeostasis and with a defensive role of the gut mucus through antimicrobial secretion5,11

First line of defense of the immune system

The scientific literature also mentions several mechanisms involving innate immunity, and more precisely dendritic cells, macrophages, innate lymphoid cells and neutrophils. These cells, which complete the previously described system, act as the first line of defense of the immune system. In the intestines of healthy subjects, macrophages are hyporeactive (reduced proliferation and activity) and can produce anti-inflammatory cytokines11. On the contrary, in patients with IBD, the imbalance in innate immunity cell populations could be associated to several phenomena11: bacteria crossing the mucus which became permeable due to macrophage activity decrease and defective neutrophil recruitment; inflammation induced by the production of large quantities of pro-inflammatory cytokines (TNF-α and IL-6) by specific macrophages; and inflammatory T-cell recruitment through the accumulation of dendritic cells which induce an adaptive immune response. 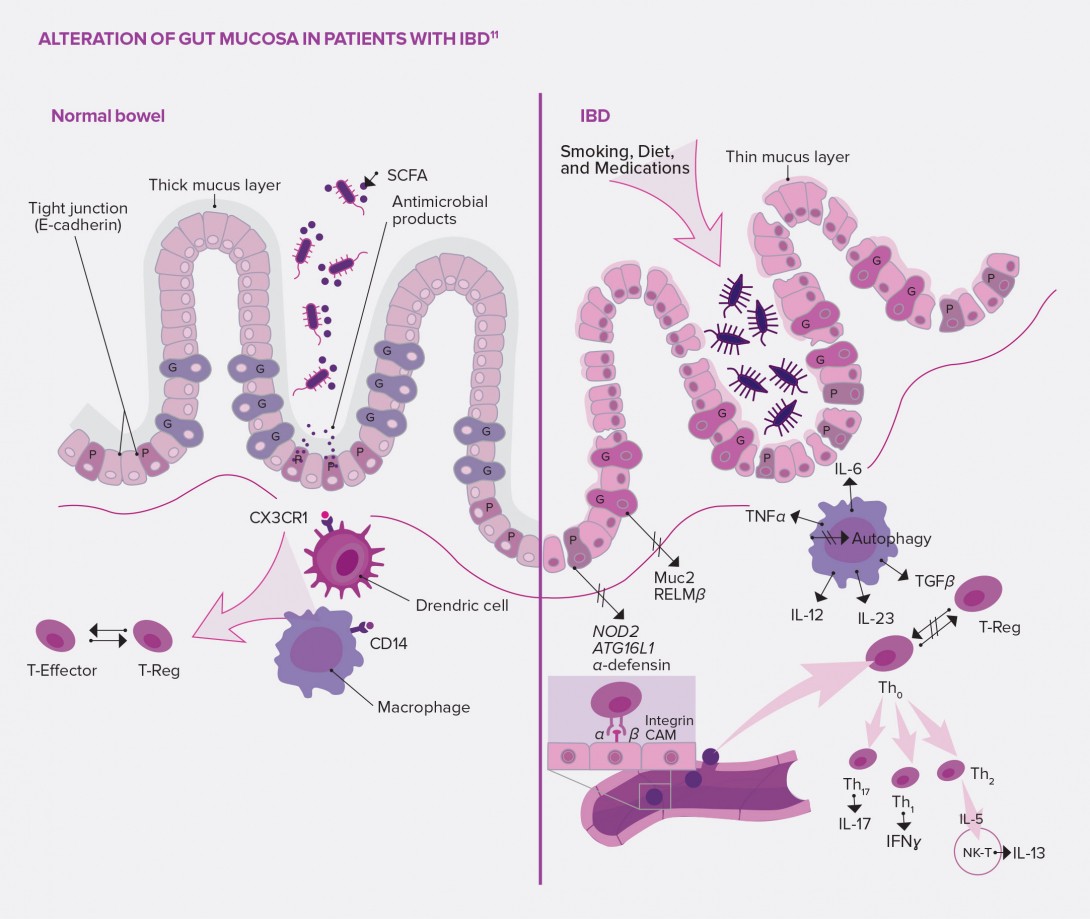 Pr. Philippe Seksik: Towards an innovative management of IBD
Gastroenterologia