Commented Articles
Children's Section
 Feeding practices from birth to 12 months: impact on the gut micro- biota and the risk of being overweight

The aim was to characterize the association between breastfeeding, microbiota, and risk of overweight during infancy.
The study included 1,087 infants; fecal microbiota at M3 to M4 and/or M12 were characterized by 16S ribosomal RNA sequencing. At M3, infants who were exclusively formula fed had an increased risk of overweight. At M12, microbiota profiles differed significantly according to feeding practices at M6; among partially breastfed infants, formula supplementation was associated with a profile similar to that of nonbreastfed infants, contrary to the introduction of complementary foods without formula. Breastfeeding may be protective against overweight by modulating the gut microbiota. Subtle microbiota differences emerge after brief exposure to formula in the hospital. Formula feeding appears to stimulate changes in microbiota that are associated with overweight, whereas other complementary foods do not.

WHAT IS ALREADY KNOWN ABOUT THIS TOPIC?

From birth, certain factors influence the development of obesity. Breastfeeding has a protective effect, partly because breast milk is low in protein. The gut microbiota (GM) must also be taken into consideration because it is involved in food absorption and energy metabolism. The GM is formed during the first 2 to 3 years of life, and the method of feeding (breast milk vs. infant formula milk) is one of the main factors that modulates GM composition. The GM of obese adults is less diverse and has a higher ratio of Firmicutes/Bacteroidetes.

WHAT ARE THE MAIN RESULTS OF THIS STUDY?

This study is based on data from 1,087 infants included in the CHILD birth cohort (Canadian Healthy Infant Longitudinal Development). Infant faecal samples were collected for microbial analysis at 3 to 4 months (n=996), 12 months (n=821),  and at both time points (n=730). Mothers completed questionnaires on the method of feeding at 3 and 6 months, which made it possible to define different groups according to breastfeeding practices (Table 1). Among these infants, 74.2% were delivered vaginally, and 39.8% of mothers were overweight or obese. Rates of exclusive breastfeeding were 53.8% at 3 months and 17.6% at 6 months.

At 3 months, exclusive breastfeeding protected against the risk of being overweight at 12 months (defined by mea- sured weight: expected weight ratio > 85th percentile) compared to exclusively formula-fed infants: 19.2% vs. 33.3%, respectively, with no significant effect of adjustment (Table 1). At 6 months, formula milk in addition to breastfeeding increased the risk of being overweight at 12 months, but solid foods did not have the same effect. Prolonged breastfeeding was found to confer a protective benefit.

As expected, GM richness and diversity at age 3 to 4 months differed according to the method of feeding, and the composition was significantly different between exclusively breastfed and non-breastfed infants (Figure 1). An increase in breastfeeding was accompanied by an increase in relative abundance of Bifidobacteriaceae and Enterobacteriaceae and a decrease in Lachnospiraceae, Veillonellaceae, and Ruminococcaceae. 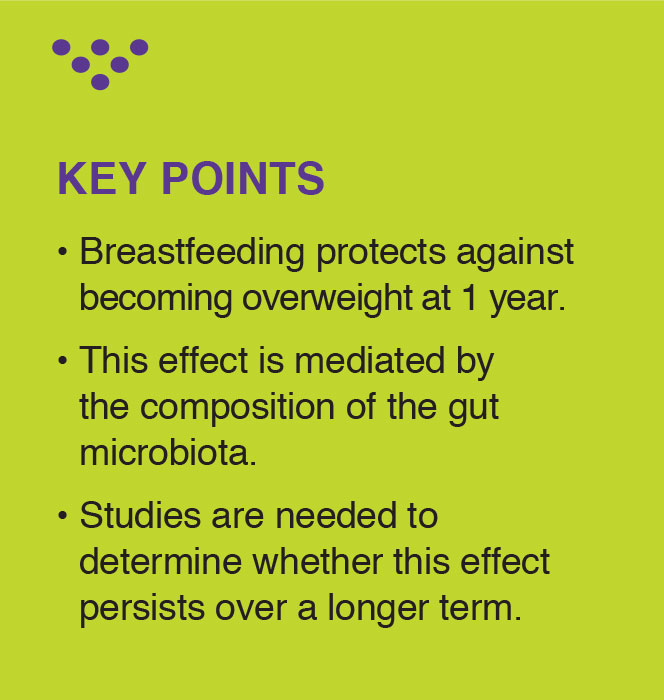 By 12 months, the GM had become more homogeneous but there were still differences relative to the method of feeding at 6 months, i.e. increased richness for infants at least partially fed with formula milk, and a relative abundance of Actinobacteria and Proteobacteria that was higher in exclusively breastfed infants and lower in non-breastfed infants. 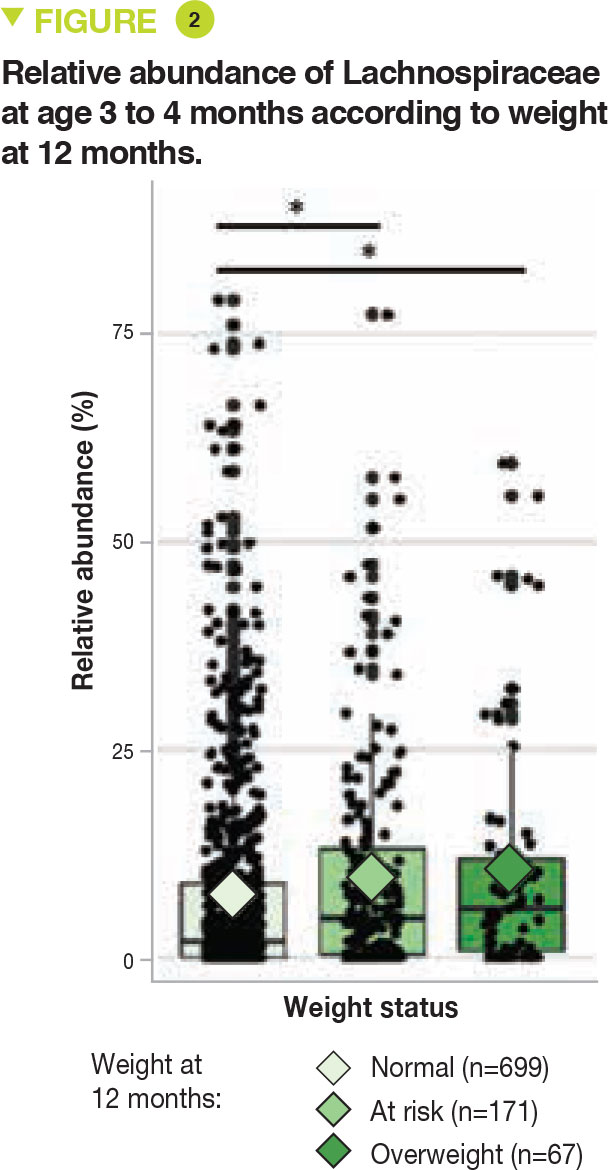 WHAT ARE THE PRACTICAL CONSEQUENCES?

This study firstly demonstrates the benefit of breastfeeding on gaining excess weight at 1 year, and secondly that this benefit is related to modulation of the GM.

Additionally, it is important to promote exclusive breastfeeding from birth, by limiting supplementation with infant formula milk in the maternity unit. This benefit is enhanced by prolonged breastfeeding. Whereas the use of formula milk has a negative impact in infants, this is not the case for solid foods. 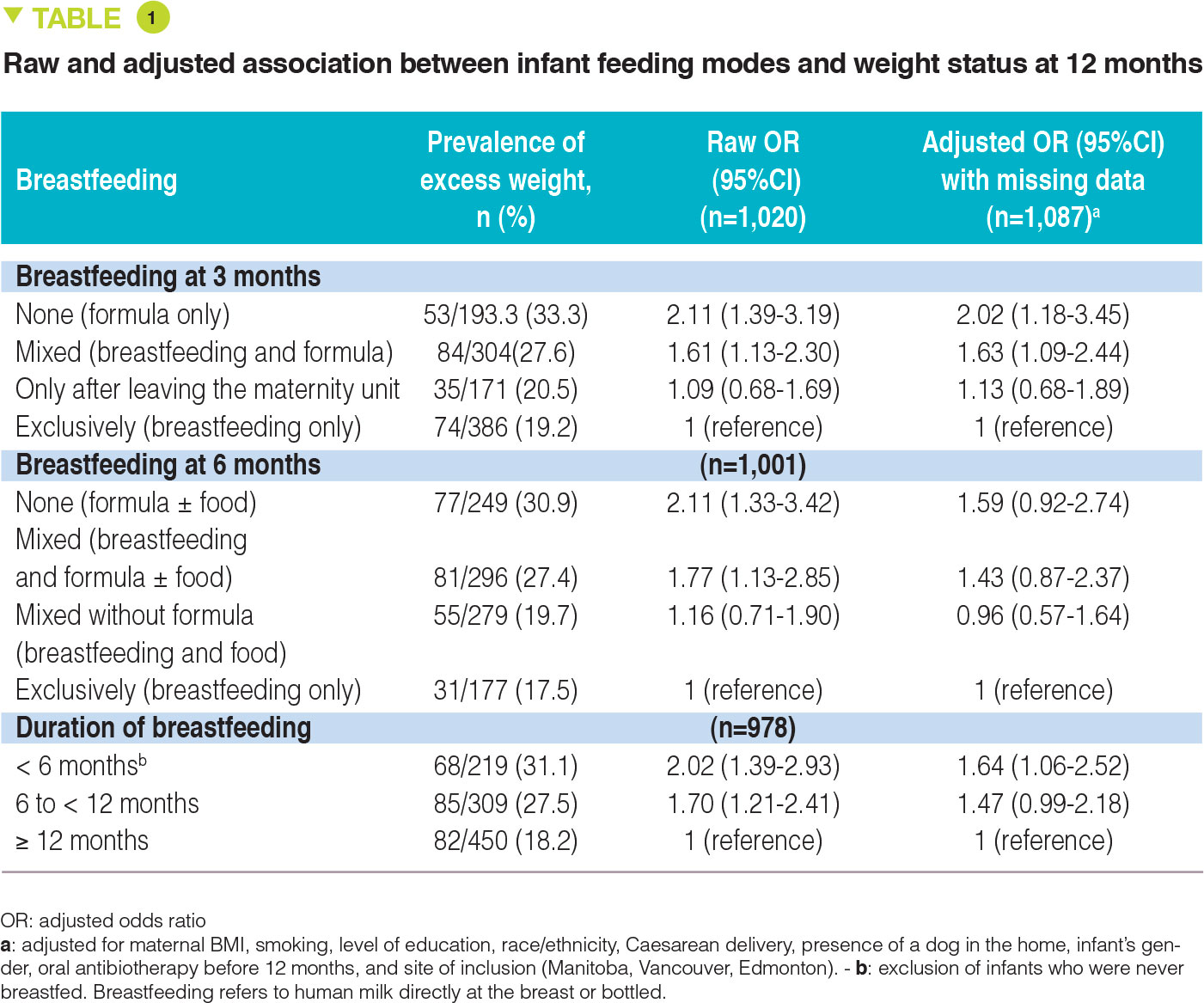