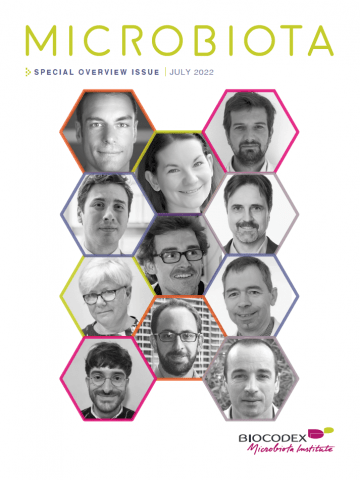 Dear colleagues, As you may have noticed from the various issues of Microbiota Magazine, the gut microbiota has long since ceased to be an obscure, non-mainstream, area of research monopolized by a handful of passionate and determined researchers. In 2011, 622 scientific publications relating to the gut microbiota were cited on PubMed. By 2021, this figure had risen to 11,743.

A clear sign of dynamic medical research, this proliferation of publications is also our source of material. Our ambition in each issue of Microbiota Magazine is to give you the most accurate picture possible of progress in research on the gut microbiota. Thanks to its exhaustiveness and the contribution of leading specialists, the “overview” article has become the magazine’s focal point. Recent readership surveys have confirmed it as one of the most popular sections of the magazine. Given your interest, we decided it would be helpful to bring together the last six overview articles published. This “overview of overviews” gives you a clear idea of the variety and diversity of research projects currently underway. Whether it is the involvement of the gut-brain axis in irritable bowel syndrome, the role of the gut microbiota in Clostridioides difficile infections, the metabolism of drugs by the gut microbiota, the dialog between the gut microbiota and host immune responses to infection, or more recently the links between the gut microbiota and autism, Microbiota Magazine gives you a representative and up-to-date summary of the latest findings on the gut microbiota’s role in health.

The gut microbiota and drug metabolism

New perspectives in autism: the role of microbiota in social communication