C. difficile infection (CDI) has become in recent years a clinical and socio economical burden worldwide, due to its increase in morbidity, severity, mortality, and likelihood to recur. There is a considerable involvement of gut microbiota in CDI, for many reasons. First, most risk factors associated with the development of CDI, including the overuse of broad-spectrum antibiotics or proton pump inhibitors, are associated with an imbalance of gut microbiota. Moreover, specific microbiota modulators are involved in the prevention (specific probiotics) or treatment (fecal microbiota transplantation) of CDI. In this paper, we will review epidemiology, risk factors, and approved therapies of CDI, with a microbiota-centric view.

Clostridioides difficile (C. difficile, previously called Clostridium difficile) is a gram-positive, spore-forming, obligate anaerobe. Spores allow C. difficile to persist in environments, and to be spread from infected subjects. Under specific circumstances (e.g., antibiotic-driven dysbiosis), spores are driven to germination in the large bowel, and present in a vegetative form that leads to clinical infection (Clostridium difficile infection [CDI]). In the infection phase, C. difficile produces two toxins, enterotoxin A and cytotoxin B that both cause damage to colonocytes and trigger the inflammatory response, leading to a variety of clinical pictures, from mild colitis to pseudomembranous colitis and toxic megacolon. [1]

In recent years, CDI has become a considerable healthcare and economical burden in most countries. Studies from the United States report an incidence of nearly 453,000 cases and of nearly 29,000 CDIrelated deaths in 2011, while the incidence in Europe is 124,000 cases/year, with nearly 3,700 deaths/year. Increased morbidity, hospitalization length and mortality, contribute to the considerable economic burden of CDI, which accounted for nearly $ 5 billions in the US in 2011, and for nearly € 3.7 billions in Europe in 2013. [2, 3] These figures show that the CDI incidence has risen worldwide, for several reasons. First, the increased use of antibiotics, which are a known as risk factors for CDI development. Furthermore, the spreading of specific ribotypes (mainly the virulent ribotype 027, but also the 017 in Asia, the 018 in Italy, the 17,621 in Eastern European countries, 24,422 in Oceania) has let CDI clusters develop. Additionally, there was also an increased number of diagnoses, due to the development of highly sensitive diagnostic tests (e.g., PCR), and the risen awareness of CDI among healthcare professionals. Overall, the main cause of the overall increase in CDI incidence appears to be the increased rate of recurrences. From 2001 to 2012, the annual incidence of recurrent CDI has increased by nearly 189%, while the increase in overall CDI incidence in the same time period was nearly 43%. [2] As recurrent infection is less likely than first episode to be cured by antibiotics, it is associated with longer hospitalization, increased morbidity and mortality too.

CDI is widely known to be the main cause of healthcare associated infectious diarrhoea, but recent evidence suggests that its diffusion in the community settings is growing. To date, nearly 25%-35% of CDI cases are acquired in community, probably due to several fecal-oral transmission pathways (e.g., zoonosis and food).

Despite this increase in diagnoses, the misdiagnosis/underdiagnosis of CDI is still relevant, as observed in the EUCLID study.
This finding suggests that a considerable number of patients with CDI is still not diagnosed, increasing the risk of disease diffusion.

Nosocomial CDI, a community-acquired CDI, appear to differ for several characteristics. First, nosocomial patients are more likely to present with a severe clinical picture, while community patients can even be asymptomatic carriers, increasing the risk of CDI spreading. Moreover, community- based CDI is known to spread also among patients without standard risk factors.

Although the exact pathogenic pathways of CDI are not yet clarified, several risk factors have been identified over time. [4] Their knowledge is relevant as the management of modifiable risk factors is a prevention measure against CDI. Most relevant risk factors include older age, use of antibiotics, proton pump inhibitors, and others (Figure 1). 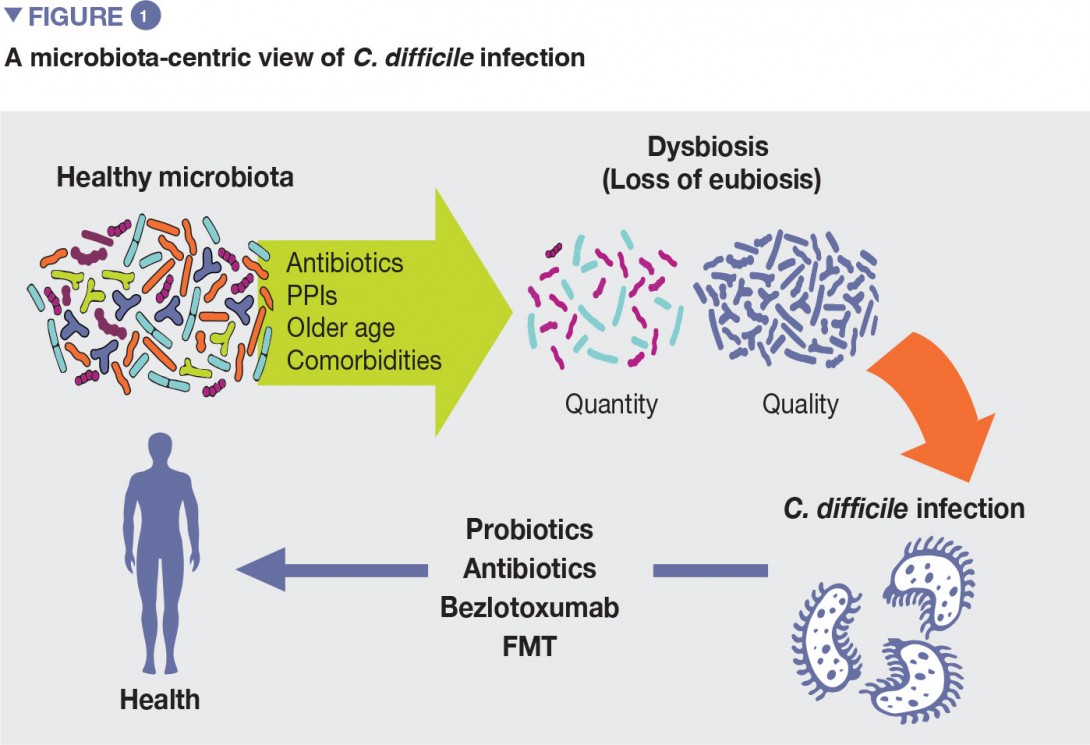 If antibiotics remain today essential molecules in the therapeutic arsenal, it is also necessary to take into account their undesirable effects on the gut microbiota, as a considerable body of evidence supports the association between their use and many dysbiosis-associated diseases, including CDI.[5]

First, antibiotics may kill commensal bacteria that may have a direct action against C. difficile (by secreting a number of bacteriocins) and also compete with the pathogen for nutrients (e.g., sialic acid and succinate). Moreover, there is also an indirect protective role of commensal bacteria through the regulation of bile acids.

The use of systemic antibiotics is the most relevant modifiable risk factor for the development of CDI. Healthy gut microbiota can determine the successful colonisation of the large bowel by C. difficile or not, by direct and indirect pathways. In principle, the imbalance of healthy gut microbiota by broad-spectrum antibiotics may bring several consequences that drive to CDI.

A number of systematic reviews, alone or with meta-analysis, have assessed the relevance of different antibiotic classes in CDI development. In the earliest meta-analysis (1998), antibiotics use was associated with a 6-fold increase in the risk of developing CDI, and the highest risk was observed for fluoroquinolones, clindamycin, cephalosporins. Moreover, the use of antibiotics was found to be an independent predictor of CDI recurrence (relative risk 1.76). One of the key factors to prevent CDI is represented by the antibiotic stewardship approach, so the knowledge of the CDI risk for different antibiotic classes is of paramount importance (Table 1).

The use of the following antibiotics is associated with a 2-fold higher risk of CDI among inpatients: clindamycin, cephalosporins, carbapenems, fluoroquinolones, trimethoprim, sulphonamides. In the community setting, respectively, antibiotics were found to have different risk levels for CDI development or recurrence, including: clindamycin (risk increased of 8 to 20 times), cephalosporins and fluoroquinolones (3-5 times increase), macrolides (2-3 times increase).[5]

The association between CDI and selected comorbidities has also been explored systematically. In a systematic review, significantly higher risk of CDI was found for inflammatory bowel disease (OR 3.72), kidney insufficiency (OR 2.64), hematologic malignancies (OR 1.75), and diabetes mellitus (OR 1.15). This was especially true for community-acquired CDI.[7]

Traditionally, metronidazole and vancomycin have been the most common treatment options for CDI, being used both as first line options, while only vancomycin was recommended, as tapered or pulsed regimen, to treat recurrent disease.[8]

However, in recent years CDI has become more cumbersome to treat. In particular metronidazole was shown to achieve lower cure rates than vancomycin, so that vancomycin has been preferred to metronidazole also in primary infection. Overall, also vancomycin is losing its efficacy, and the rates of recurrent disease have grown. Morover, hypervirulent strains of C. difficile have emerged, specifically the ribotype 027, which is less responsive to standard antibiotic therapy and is associated with more severe clinical pictures [8]

In recent years fidaxomicin, a narrow spectrum antibiotic, was shown to be superior than vancomycin in treating CDI recurrences. However, its high costs and the recent evidence of its inferiority compared with fecal microbiota transplantation (FMT) in treating recurrent CDI are potential limitations to its widespread use.[9]

Antibiotics are an extraordinary scientific discovery that saves millions of lives but their excessive and inappropriate use has now raised serious concerns for health, notably with antibiotic resistance and microbiota dysbiosis. Let’s take a look at this dedicated page:

The ambivalent role of antibiotics

By destroying the bacteria responsible for infection, antibiotics can also lead…

Generally, probiotics are considered a reliable option to restore healthy gut microbiota after a dysbiotic event, e.g., antibiotic treatments. Overall, some probiotics are known to be effective against antibiotic-associated diarrhea (AAD), which is a common adverse event of antibiotic regimens.[10-12] In a metanalysis of 21 randomized trials, Saccharomyces boulardii decreased significantly the risk of AAD (risk ratio: 0.47).[11]

As CDI is basically a subgroup of AAD, the efficacy of probiotics in preventing CDI was then investigated. Recently, a Cochrane review has shown, in a meta-analysis of 23 trials, that probiotics are both safe and effective for preventing CDI.[13] However, only specific probiotics, including Saccharomyces boulardii, Lactobacillus casei, a mixture of L. acidophilus and Bifidobacterium bifidum, and a mixture of L. acidophilus, L. casei and L. rhamnosus, have been found to be effective in preventing primary CDI after antibiotic therapies. In particular, S. boulardii was effective in preventing CDI in a cohort of elderly hospitalized patients, with likely saving of money. Indeed, a Canadian study showed that the use of preventative probiotics was able to save $ 518/patient than usual care, and to reduce the risk of CDI.[11] However, further, larger studies are needed to confirm the role of specific probiotics in CDI prevention.

Based on this outstanding evidence, scientific societies have included FMT among the treatment options for recurrent CDI.[14, 15] FMT is also known to increase overall survival and decrease hospitalization length in patients with recurrent CDI.[16]
Although FMT has been increasingly standardized over years, is still underdiffused worldwide. Future microbiota-based approaches that will guarantee a widespread diffusion of FMT include capsulized FMT and microbiota-based drugs.

FMT is the infusion of stools from healthy donors in the gut of a recipient to cure a dysbiosis related disorders. To date, several systematic review and meta-analyses have shown that FMT is highly effetive in curing recurrent CDI (up to 90% cure rates).

CDI is a burdensome disease that occurs mainly in patients with several risk factors, most of which are associated with gut microbiota imbalance, including antibiotic overuse, proton pump inhibitors, and older age. Also from a microbiological point of view, the microbial profile of patients with CDI is characterized by a deep imbalance of gut microbiota. Therapeutic microbiota modulators have been shown to be effective in preventing (specific probiotics, some Lactobacillus strains and S. boulardii) or curing (FMT) recurrent CDI, paving the way for a microbiota-based approach for the management of this disorder.

15 McFarland LV. Probiotics for the primary and secondary prevention of C. difficile infections: a meta-analysis and systematic review. Antibiotics 2015 ; 4 : 160-78.