Ageing is accompanied by a deterioration of many bodily functions and inflammation, which collectively contribute to frailty. It has already been shown by the authors and other teams that frailty is associated with cha nges in the gut microbiota, and more especially in the context of a poorly diversified diet. The Mediterranean diet is associated with good health. In this study the authors sought to determine if 12 months of Mediterranean diet, known to be associated with good health, could modify the gut microbiota, reduce frailty and improve cognitive function. The gut microbiota was profiled in non-frail or pre-frail subje cts in five European countries before and after the adoption for 1 year of a Me diterranean diet tailored for elderly subjects (NU-AGE diet). The results showed that it is feasible to improve the usual dietar y regime in order to modulate the gut microbiota, and thus promote healthier ageing.

Frailty which accompanies ageing involves the failure of several physiological systems and constant activation of the innate inflammatory immune response. Frailty can include the development of chronic lowgrade inflammation, impaired cognitive function, sarcopenia and the development of chronic diseases such as diabetes and atherosclerosis. The modification of dietary regimens such as the adoption of a Mediterranean diet has been suggested as a key therapeutic strategy to combat frailty.[2] The Mediterranean diet is characterised by the consumption of larger amounts of vegetables, pulses, fruits, nuts, olive oil, fish and the consumption of smaller amounts of red meat, dairy products and saturated fats. The adhesion to this type of diet is associated with reduced mortality and increased anti-oxidant activity, as well as a reduction in the incidence of several diseases and inflammation.

Several studies have shown that the adoption of this diet is related to a reduction in frailty. Beyond the inverse relationship with disease, closer adhesion to a Mediterranean diet was associated with beneficial changes in the composition of the gut microbiota (reduction in proteobacterial abundance, increased production of short chain fatty acids [SCFAs]). As a general rule however, few elderly subjects follow this type of diet and a large number suffer because of a restricted diet associated with a low-diversity gut microbiota. Changing this is a major challenge, in particular concerning persons in care homes.

In previous studies the authors used bioinformatic analysis to identify specific microbial taxa which are gradually lost in the transition from a high-diversity microbiota of healthy subjects to a low-diversity microbiota of frail subjects. In a recent 6-month dietary intervention study in elderly individuals given supplementation with 5 prebiotics (up to 20 g/day), several microbial taxa were modified, but no change was noted in the overall diversity of the microbiota nor in the inflammatory markers. The authors therefore concluded that a more drastic dietary intervention was necessary. The dietary intervention NU-AGE project aimed to study the effect of administration of a personalised Mediterranean diet for 12 months in a large cohort of over 1,200 persons aged 65 to 79 years, distributed across five European countries. A significant relationship was observed between increased adherence to the Mediterranean diet and global cognitive capacity and improved episodic memory.[3]

Moreover, it was shown that greater adherence reduced the rate of bone loss in individuals with osteoporosis and improved innate immune function, blood pressure and arterial stiffness.[4-6] In the study described here, the authors analysed the gut microbiota of a sub-group of study subjects.

A total of 612 subjects were analysed (289 controls: 145 males, 144 females and 323 on a Mediterranean diet: 141 males, 182 females). At baseline, differences in terms of diet and microbiota were observed between the various countries. Relationships between the Mediterranean diet and the gut microbiota were revealed. Among the taxa associated with good adherence with the Mediterranean diet (DietPositive), we find an over-representation of species such as Faecalibacterium prausnitzii, Eubacterium and Roseburia, a majority of which are associated with good health (including the production of SCFAs and anti-inflammatory effects). Inversely, certain taxa are depleted in case of good adherence to this diet, some of which have been linked to type 2 diabetes, colorectal cancer, cirrhosis or chronic inflammatory bowel disease. Taken together, these results suggest that adherence to a Mediterranean diet can modulate the microbiota in a direction positively associated with health.

Lastly, the authors observed that the abundance of DietPositive taxa were negatively correlated with some inflammatory markers (high-sensitivity CRP (hsCRP) and IL-17), and with clinical scores associated with increased frailty (Fried scores, gait speed time). In contrast, the abundance of these taxa was positively correlated with the improvement in cognitive function (Constructional Praxis score, Babcock memory score) and reduced frailty (hand grip strength) and two anti-inflammatory markers (adiponectin and sGP130). The opposite trend was observed with DietNegative taxa (Figure 1). Analysis of the inferred microbial metabolite profiles indicated that the diet-modulated change in microbiota was associated with an increase in production of short/branched chain fatty acids and a lower production of secondary bile acids, p-cresols, ethanol and carbon dioxide.

These results confirm that dietary intervention is an effective means of improving health, at least partially, via a modulation of the gut microbiota. Of course we can recommend that elderly subjects adopt a Mediterranean diet, but the feasibility of this type of dietary intervention is questionable in the long-term. As this study has identified bacteria associated with the beneficial effects of the Mediterranean diet, it lays the groundwork for their use in the form of next-generation probiotics. This type of approach based on bacteria from the gut microbiota should be tested in this indication. 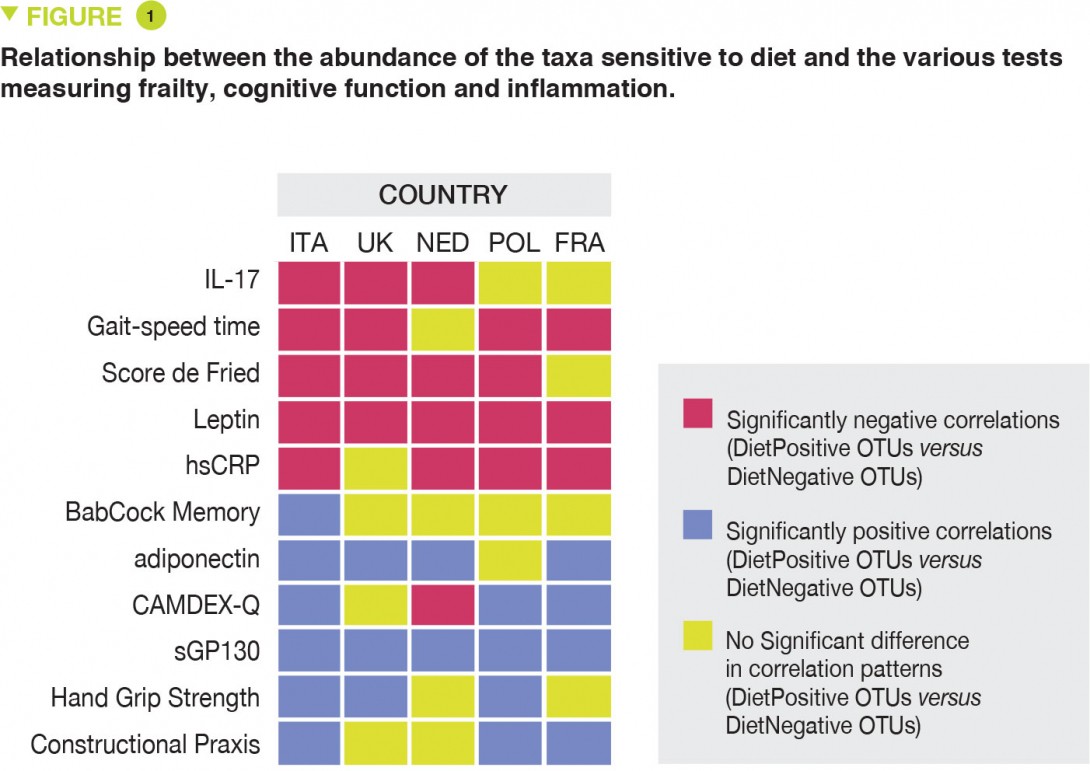 This study highlights the complex interactions between diet, the gut microbiota and health. It suggests that the beneficial effects of a Mediterranean diet on the health of elderly subjects is due, at least in part, to a modulation of the gut microbiota.

Commented article
Gut microbiota and Clostridioides difficile
Metagenomics of the faecal virome: cumulative effect of the quantity of gluten and enteroviruses risk of coeliac disease autoimmunity in predisposed children – the TEDDY study
Focus