New perspectives in autism: the role of microbiota in social communication

Autism Spectrum Disorders (ASD) are complex neurodevelopmental disorders affecting 1% of the general population and characterized by a deficit in social communication and repetitive/stereotyped behaviors. The pathophysiological mechanisms behind ASD are still poorly understood [1]. Thirty to 50% of individuals with ASD present gastrointestinal (GI) symptoms such as abdominal pain, diarrhea, constipation, which affect their quality of life and their global functioning. Interestingly, the occurrence and the severity of GI symptoms are strongly correlated with autistic symptoms [2]. Whereas the etiology of GI symptoms are still unknown, several studies suggested that ASD could result from an imbalance in the gut microbiota (GM) composition [3]. Consistent findings suggest robust interactions between GM and the central nervous system (CNS). GM directly affects neurodevelopment by impacting neurogenesis, neuron survival, brain growth and myelination. The modulation of GM using pro- or prebiotics or fecal microbiota transplantation (FMT) in individuals with ASD shows beneficial and long-term effects on GI symptoms and core autistic symptoms. Larger double-blind randomized trials are however needed to confirm the efficacy of microbial-based therapies in ASD, specifically at an early and critical stage of neurodevelopment 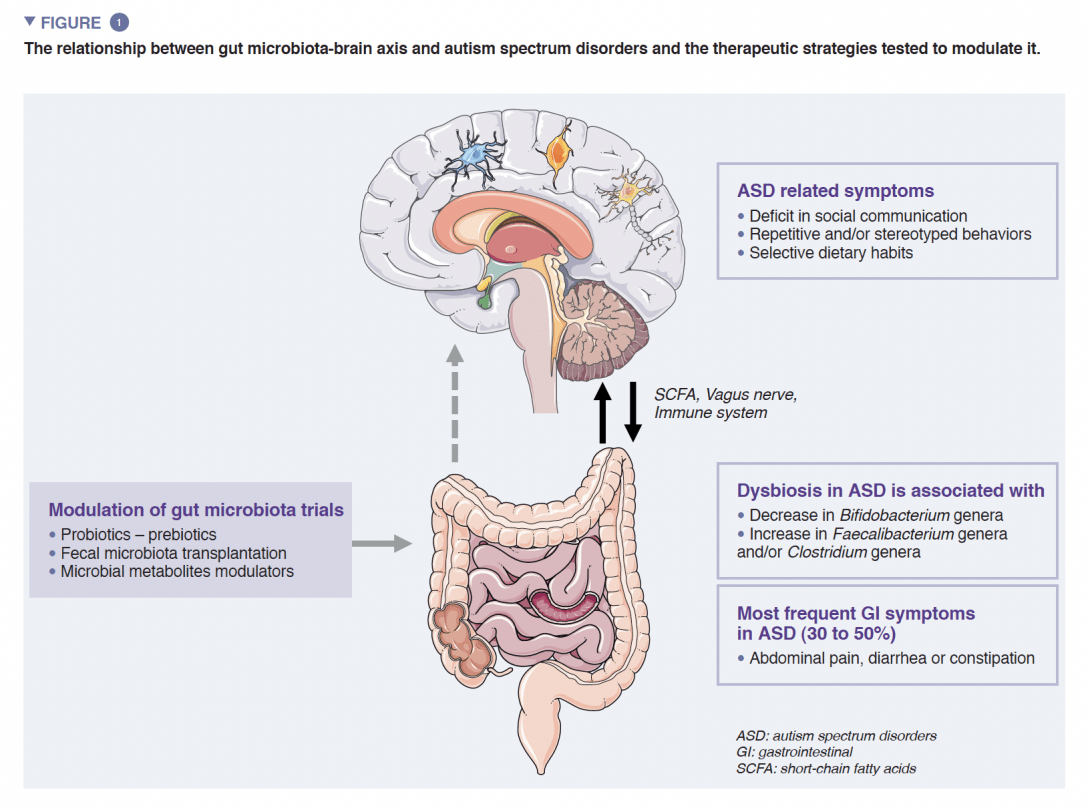 A reciprocal crosstalk between brain and GM is mediated by microbial metabolites (mainly short chain fatty acids) and immune modulators directly by crossing both the blood-gut and the blood-brain barriers and indirectly via the stimulation of the vagus nerve [6]. Evidence supports the involvement of GM in the regulation of both human behaviors and cognitions - specifically socio-communication skills – even if its exact mechanisms are still unknown [5].

ASD are neurodevelopmental disorders characterized by impairments in social communication, social interactions, and repetitive/stereotyped behaviors, of childhood onset affecting approximately 1% of the general population. The determinism of ASD is mainly driven by genetic factors, with a heritability estimated reaching 0.8- 0.9, but pre- and post-natal environmental events may act as precipitating factors or modulators of the symptom severity. The trajectory of brain development at an early stage of life overlaps with those of the GM. This latter begins to develop early after birth and its composition stabilizes into an adultlike profile around the age of 3 years old. GM early composition is deeply influenced by environmental factors such as the place of birth, delivery mode, breastfeeding and xenobiotics (e.g. antibiotics use).

Germ-free mice are a model lacking all microorganisms e.g are microbiologically axenic (no living organisms can be cultured from germ-free mouse specimens). Germfree mouse models are valuable to decipher the mechanisms underlying the roles of GM in neurodevelopment, but also the relationship between microbiome and disease. Studies showed that germ-free mice exhibit i) default in brain-blood barrier permeability; ii) higher brain volume; iii) more immature microglia gene expression and less microglial immune responsiveness; iv) increased myelination ; and v) decreased Brain-Derived Neurotrophic Factor expression and in a subunit of N-Methyl-D-Aspartate receptors [5, 7]. All these data stress the role of GM in blood-brain barrier formation and integrity, neurogenesis, microglia homeostasis, myelination and brain growth/ function.

Germ-free mice displayed autistic-like behaviors such as social avoidance, repetitive/ stereotyped behaviors, lack of interest in social novelty. Some of these behaviors disappeared after colonization by a GM from wild type mice whereas colonization by GM from ASD mouse models increased these behaviors. GM seems indeed crucial for the programming and presentation of social skills and adaptive behaviors [8].

A growing number of evidence shows that GI symptoms are overrepresented in ASD children. GI symptoms such as abdominal pain, constipation, diarrhea are reported in nearly 30-50% of patients with ASD and profoundly impact the quality of life of children [1]. GI symptom severity was correlated with the severity of autistic symptoms and gut dysbiosis is well documented even if there is still no specific signature related to autistic symptoms. Studies exploring GM reported differences in microbiota diversity, and abnormal metabolite patterns when compared to healthy controls. Two recent meta-analyses exploring GM composition in ASD patients reported a decrease in Bifidobacterium and increase in Faecalibacterium and Clostridium genera in ASD patients [9, 10] compared to controls. The exploration of the fecal metabolome also displayed an increase in p-cresol, a bacterial metabolite derived from tyrosine, in individuals with ASD. All together, these data may indicate the potential association between GM abnormalities and GI symptoms in ASD patients.

However, most studies have heterogeneous results and methodological limitations. Merely confounding factors such as different countries with different lifestyles and dietary habits are major drawbacks of these studies. Indeed, a recent study in a large cohort of 247 subjects with ASD did not report direct links between ASD diagnosis or autistic symptoms, and GM dysbiosis. Dysbiosis was associated with a less-diversified diet which is common in patients with ASD [8].

Modulation of the gut microbiota in autism spectrum disorders

A growing number of studies explored the potential impact of microbiota-based therapeutic strategies to improve GI symptoms and core symptoms in individuals with ASD.

Probiotics, live microorganisms, have been used in ASD and could have a beneficial effect on patients with ASD. Some preclinical studies showed increased social interactions with probiotics supplementation (Bacteroides fragilis, Lactobacillus reuteri) in mouse models of ASD. The improvement of social communication was linked with an increased oxytocin expression in CNS. In humans, several studies reported positive effects of probiotic treatments on GM composition and GI symptoms in ASD [11]. However, few of them reported an improvement of core autistic symptoms. Most clinical trials providing probiotics in autistic individuals showed inconsistency in terms of probiotics, dosage administration per day or in total, and duration of the whole treatment. Even if some studies suggest that probiotics could be interesting to prevent GI symptoms in ASD patients, the results request replication to guarantee the positive effect of such strategy.

Similarly, the efficacy of prebiotics, such as galacto-oligosaccharide (GOS) or fructo-oligosaccharide have been explored in ASD [12]. Chronically stressed mice showed alteration in GM and a decrease in social interest. Using this mouse model, the administration of prebiotics was associated with increased social interactions in these mice. In humans, the use of GOS associated with a casein-free and gluten-free diet showed improvement in GI symptoms and social interactions together with an increase in GM Bifidobacterium abundance. Appropriate double-blind randomized clinical studies are needed to confirm preliminary evidence.

Fecal microbiota transplantation (FMT) has also been studied in ASD. FMT involves transplanting GM from a donor to modify the GM of the receiver. Its efficacy on Clostridioides difficile infection is now well demonstrated, even in children. A recent exploratory unblinded and non-randomized clinical trial involving 18 children diagnosed with ASD and GI evaluated the effect of microbiota transfer therapy (MTT) - a modified FMT protocol [13]. MTT consisted in a two-week antibiotic treatment, a bowel cleansing, before receiving the MTT treatment which consisted of a high dose through oral or rectal administration followed by an oral maintenance dose for 7-8 weeks. Adverse events at the initiation of vancomycin treatment were observed (disruptive behaviors, hyperkinesia) but disappeared spontaneously after 3 days of treatment. The MTT protocol led to a significant improvement in GI symptoms after the following survey of 8 weeks. More surprisingly, an improvement on core autistic symptoms (stereotyped and repetitive behaviors, social communication skills) had also been observed 8 weeks after MTT. Interestingly, improvement on GI symptoms and autistic symptoms persisted 2 years after treatment and was correlated with GM increased diversity [14]. Two years after MTT, the average reduction of the Gastrointestinal Symptom Rating Scale (GSRS) total score was still over 50%. Changes in autistic symptoms measured with the Childhood Autism Rating Scale - CARS, the Social Responsiveness Scale - SRS, or the Autistic Behavior Checklist - ABC were all positively correlated with percent changes in GSRS scores. These results are not yet confirmed by placebo-controlled doubleblind randomized studies.

Recently, a pilot open label clinical trial in ASD has explored the effect of an oral GI-restricted adsorbent (AB-2004) modulating several GM metabolites. The authors reported a decrease in anxiety-like behaviors in mice, driven by a gut microbial metabolite decrease [15]. The study also presented preliminary results from a clinical trial in which an AB-2004 weight-adjusted dose was administered, for 8 weeks, to 30 adolescents with ASD. At week 8, reduced levels of GM metabolites in plasma and urine were observed. More interestingly, after treatment, less subjects displayed GI symptoms but also ASD-associated behaviors, anxiety, and irritability. There was also a remnant effect with a persistence of the efficacy at 4 weeks after treatment discontinuation [15]. The factors linking clinical improvements and administration of AB-2004 remain to be determined, some indirect factors have not been studied such as the effect of AB-2004 on nutrition changes, immune status or GI function. Larger, double-blind placebo- controlled studies trials are warranted to further dissect the role of AB-2004 in social communication in humans.

In the context of the lack of specific treatment for GI symptoms and autistic symptoms in ASD patients, new well tolerated therapeutic strategies targeting GM or microbial metabolites such as FMT/MTT need to be more performed specifically in early and critical stages of brain development during childhood.

FMT is a new efficient way to modulate GM used in gastrointestinal and endocrine diseases. Fecal microbiota transplantation (FMT) could represent a new and efficient opportunity to modulate/reset GM in ASD. Using mouse models of ASD, FMT efficiently improved autistic like core symptoms such as social communication deficits and stereotyped behaviors. In humans, a pilot open-label trial in adults with ASD suggested that FMT could improve not only GI symptoms but also social reciprocity and stereotyped behaviors. There was a remnant effect with a persistent efficacy 2 years after treatment discontinuation. Interestingly the efficacy was associated with an increased GM diversity. FMT could be a new cutting-edge therapeutic strategy to treat GI and behavioral symptoms in ASD children, and merely open new avenues toward physiology of social communication in humans. 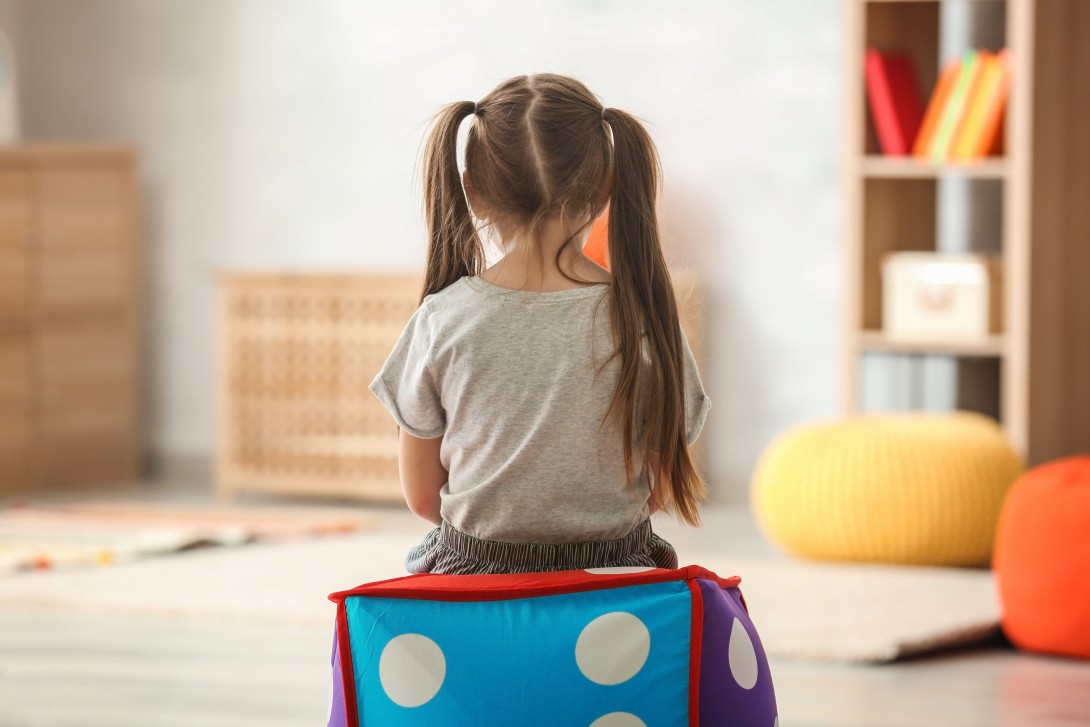 The impact of gut microbiota on the neurodevelopmental trajectory of children remains largely unexplored. At this point, there are no studies exploring the impact of gut microbiota modulation on the early phase of child development, particularly on social communication skills. Preliminary studies in adults and children have shown that GM modulation leads to improvement in GI symptoms and autistic behaviors. Based on these data, we will conduct a double-blind clinical trial in younger children with ASD at a very early stage of their cognitive development (before age 6). We aim to understand whether FMT performed at a critical developmental period will result in significant longterm improvement in the child’s developmental trajectory.