Infants are at a high risk of acquiring fatal infections whose treatment relies on functioning antibiotics. Antibiotic resistance genes (ARGs) are present in high numbers in the gut microbiomes of antibiotic-naive infants, and infant mortality caused by resistant infections is high.

In this article the authors aim to determine the impact of early exposure to formula on the ARG load in neonates and infants born either pre- or full-term. One assumption was that diet exerts selective pressure which influences the microbial community in the gut of infants and formula exposure increases the abundance of taxa-carrying ARGs.

The novel finding of a correlation between formula exposure and higher neonatal ARG burden shows that clinicians should consider feeding mode in addition to antibiotic use in the first months of life to minimise the proliferation of antibioticresistant gut bacteria in infants.

Antibiotic-resistant bacteria are the cause of many neonatal deaths. The emergence of resistant bacteria is favoured by the use of antibiotics, which is associated with a higher number of antibiotic-resistance genes (ARGs) carried by these resistant or multi-resistant bacterial strains. Mobile genetic elements (MGEs) transmit ARGs between bacteria. It is also known that the type of diet modifies the intestinal microbiota, as well as the quantity of ARGs. The magnitude of the impact of infant diet on resistance has not been adequately described in the literature.

The authors included 46 infants born prematurely between 26 and 37 weeks of gestation of which 21 were fed with formula, 20 with fortified breast milk and 5 with breast milk. Stools were collected within 36 days to analyse the composition of gut microbiota and presence of ARGs. Thirty infants received an antibiotic treatment: stools were collected approximately two weeks after the end of treatment to limit confounding effects.

To compare the results with literature data, a meta-analysis of five studies including 696 neonates with similar data was analysed in parallel.

The abundance of Enterobacteriaceae, whose genome is known to contain more mobile ARGs, was higher in formula-fed infants (p < 0.05) (Figure 2) and tended to be inversely correlated to gestational age (p < 0.1). It was noted that the longer the gestation the lower the abundance of these ARGs (x 0.72; 95% CI, 0.57-0.89) (p < 0.001). Several ARGs were significantly more abundant in formula-fed infants including genes encoding the extended-spectrum beta-lactamase present in Klebsiella (p < 0.05). Similar results were observed in the meta-analysis with a 70% relative increase in ARGs in formula-fed neonates (p = 0.013). The median ARG load was higher in the formula-fed infants in all cohorts (Figure 3). Finally, an analysis of gut microbiota revealed that bacteria belonging to Bifidobacteriaceae, Veillonellaceae, Clostridiaceae, Lachnospiraceae, and Porphyromonadaceae families (including strict anaerobe bacteria) were depleted in neonates fed with infant formula; conversely, facultative anaerobe bacteria belonging to the Enterobacteriaceae, Staphyloccoccaceae, and Enterococcaceae families were increased (p < 0.05). 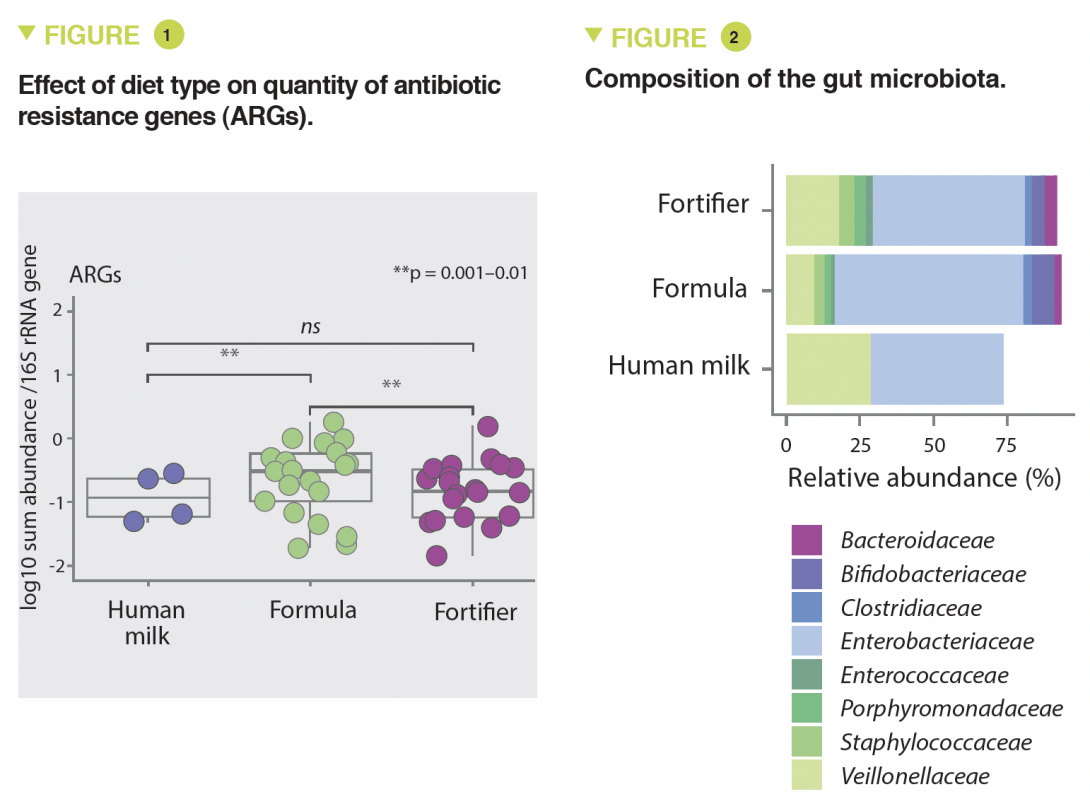 These results support the benefit of breastfeeding. Feeding premature neonates with infant formula is associated with a 70% increase in ARGs compared to those fed exclusively with breast milk. Enriched breast milk results in a smaller increase in these ARGs. 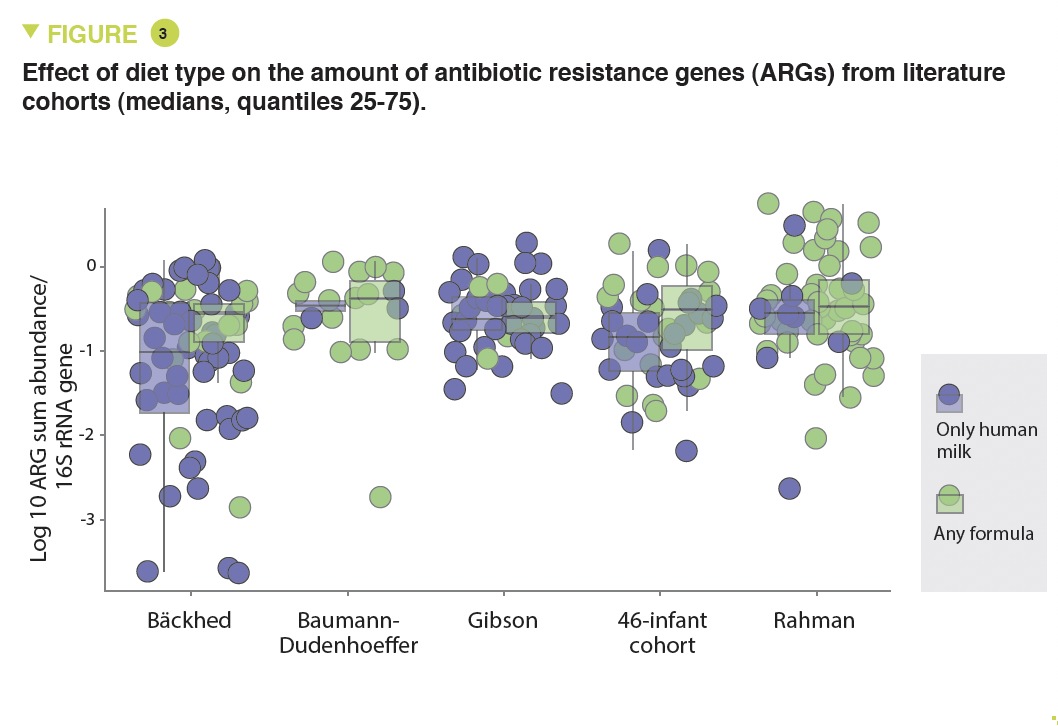 In addition to the appropriate use of antibiotics, it is important to consider the type of diet for premature neonates, with a preference for breast milk to avoid the proliferation of resistant bacteria.

The blue poop challenge a reliable method to evaluate gut transit?
What's worth reading about microbiota
Follow us on Twitter