Despite overall success, T-cell checkpoint inhibitors for cancer treatment (anticancer immunotherapy) are still only efficient in a minority of patients. Gut microbiota was recently found to critically modulate anti-cancer immunity and therapeutic response. In this article the authors identified Clostridiales members of the gut microbiota associated with a lower tumour burden in colorectal cancer (CRC) mouse models. Interestingly, these commensal species are also significantly reduced in CRC patients compared with healthy cont rols. Gastric gavage administration of a combination of four Clostridiales strains (CC4) in mice prevented and even successfully treated CRC as stand-alone therapy. This effect was dependent on intratumoral infiltration and activation of CD8+ T cells. Administration of a single strain of Roseburia intestinalis or Anaerostipes caccae was even more effective than CC4. In a direct comparison, the CC4 combination supplementation outperformed anti-PD-1 therapy in CRC and melanoma mouse models. These findings provide a strong preclinical basis for exploring gut bacteria as novel stand-alone therapy against solid tumours.

Gut microbiota plays a major role in the development of the immune system and maintenance of immune homoeostasis. Gut microbiota influence the immune system both on a local and systemic level, maintaining a balanced immune response. In common with a wide range of diseases such as obesity, chronic inflammatory bowel disease, neuropsychiatric disorders, and colorectal cancer (CRC), disruption to the microbial balance (dysbiosis) is implicated.

CRC, as one of the most frequently diagnosed malignant diseases, remains the leading cause of cancer deaths worldwide related to lifestyle (diet, tobacco, alcohol) or obesity risk factors, which are all closely related to changes in the composition of healthy gut microbiota.

Gut microbiota is altered in CRC patients, with an increase in taxa such as Bacteroides or Fusobacterium [2] and a decrease in bacterial Clostridiales taxa compared to healthy individuals [3]. A majority of colorectal tumours have low immunogenicity and therefore do not respond to current T-cell activation immunotherapies. Anti-PD-1, anti-PD-L1 and/or anti-CTLA4 monoclonal antibodies are only effective in 4-5% of CRC tumours with a mismatch repair defect or high microsatellite instability [4]. Recent studies have shown how some members of the gut microbiota are able to modulate the efficacy of anti-cancer treatments [5, 6]. In this study, the authors evaluated whether a cocktail of four bacterial strains, specifically associated with a low tumour burden in an experimental CRC model, could trigger an effective anti-tumour immune response. 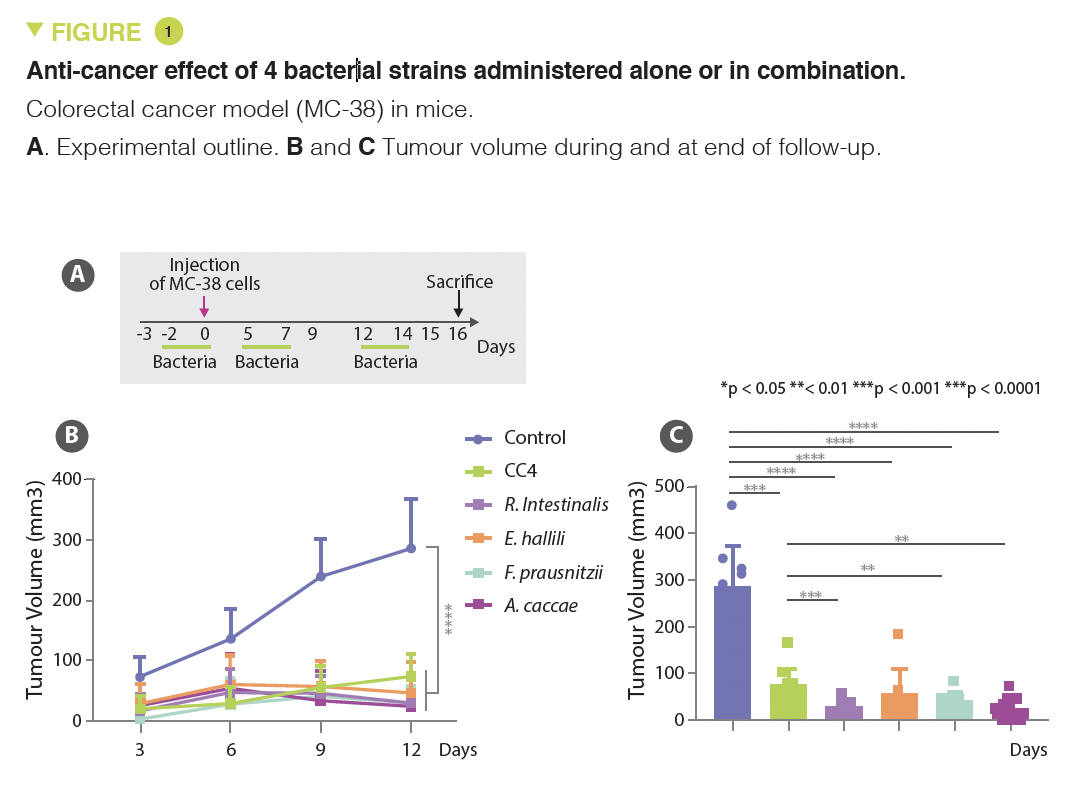 Based on animal models, the authors observed that mice with a microbiota low in Clostridiales bacteria (Ruminococcaceae and Lachnospiraceae families) had increased susceptibility to CRC. Based on these analyses, the authors selected a combination of four Clostridiales species (CC4), i.e. Roseburia intestinalis, Eubacterium hallii (Anaerobutyricum hallii), Faecalibacterium prausnitzii and Anaerostipes caccae, whose abundance is decreased in CRC patients, to conduct additional studies on mouse models. CC4 administration had an effect on the mice microbiota, with an increase in species belonging to the Ruminococcaceae and Lachnospiraceae families.

In several solid cancer models, including for CRC, lung and breast cancer, CC4 administration slowed down tumour growth. This benefit was primarily lymphocyte-mediated as it disappeared in mice without mature lymphocytes (Rag2 KO mice). The main candidates are interferon-gamma producing cytotoxic CD8+ T cells, which massively infiltrate the tumour in animals receiving CC4. The protective effect was also observed individually with each of the bacterial strains tested in a CRC model, but with varying degrees of efficacy (Figure 1). The therapeutic effect was unrelated to butyrate producing-bacteria.

Finally, in the CRC model (MC-38), the CC4 cocktail had a superior effect to anti- PD-1 immunotherapy. Moreover, no additive effect was observed among mice having received immunotherapy and the four bacteria. 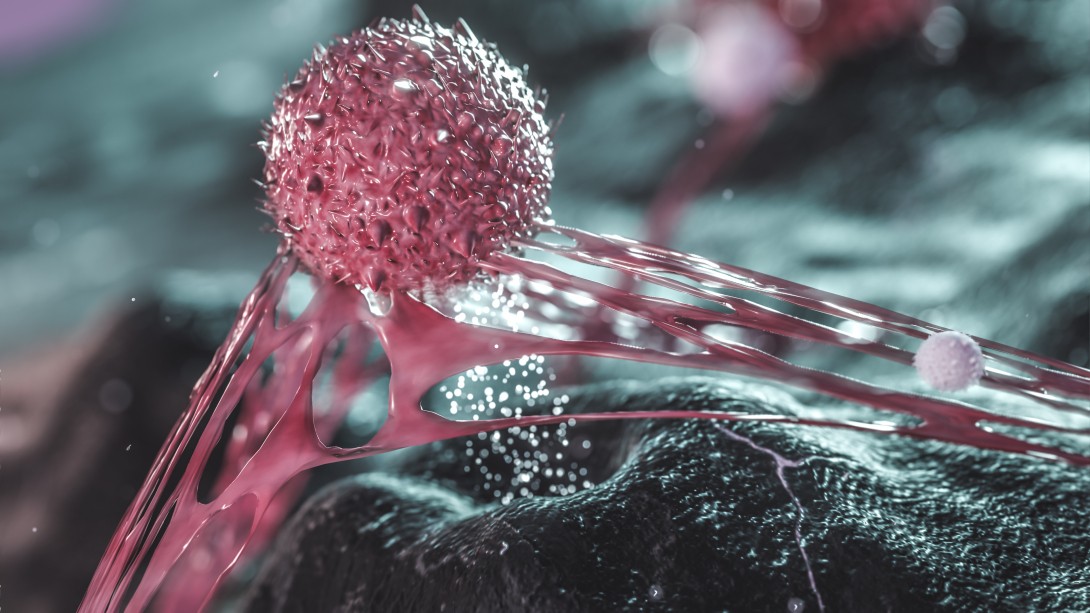 This study has shown that in addition to having an adjuvant role in the immunotherapy treatment of cancer, some microbiota bacteria exert their own anti-cancer effect in solid tumour mouse models. These results pave the way to the development of cancer treatments in man based on gut microbiota. These therapies could be used alone or in combination with other “conventional” anti-cancer treatments. However, the patient groups that would benefit most from this type of therapeutic approach are yet to be determined.

This study in mice showed that bacterial Clostridiales strains, which are significantly lower in colorectal cancer patients, are effective in stimulating an anti-cancer response to solid tumours. The mechanisms involve activation of CD8+ T cells and are independent of anti-PD-1 immunotherapy.