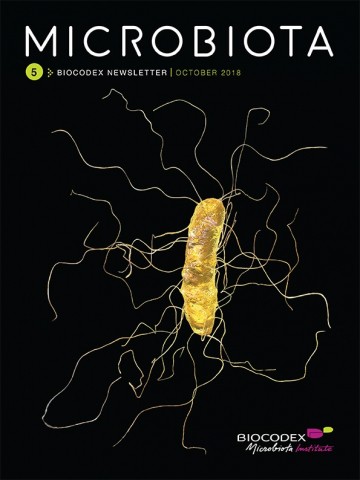 The gut microbiota is known for long to have the ability to act on our brain. Nevertheless, a bidirectional gut-brain communication system in which our gut microbiota participates has only been identified and studied as a “microbiota - gut-brain axis” since a dozen years. More recently, studies have suggested that dysbiosis could contribute to the pathophysiology of central nervous system diseases such as anxiety and depressive disorders, autism spectrum disorders, Alzheimer’s disease or Parkinson’s disease, while these last two diseases tend to be spontaneously related to brain damage. In 2017, American researchers have named “mapranosis” (for Microbiota Associated PRoteopathy And Neuroinflammation) a concept relating the microbiota to Parkinson’s and Alzheimer’s diseases.

Their research has highlighted the involvement of gut bacteria producing amyloid proteins likely to increase the production of α-synuclein in the gut. This protein, in an inadequate conformation, could be transported via the gut-brain axis and promote the formation of aggregates in the brain, leading to neurodegenerative damage. As part of this scientific stream, Prof. John F. Cryan (APC Microbiome Institute, Cork, Ireland) is particularly interested in the role of the microbiota in neurodevelopment, neuroinflammation and aging processes. In this newsletter, he explains how Parkinson’s and Alzheimer’s diseases could originate from the gut and describes dysbiosis associated with these neurodegenerative diseases, as well as the possible role of the vagus nerve.

For his part, Prof. Emmanuel Mas (Children’s Hospital, Toulouse, France) discusses the role of the microbiota - gut - brain axis in psychiatric diseases. He comments on the results of a recent Chinese study reporting gut dysbiosis in children with attention deficit hyperactivity disorder (ADHD). According to this work, the abundance of Faecalibacterium in the gut microbiota could be negatively correlated with the severity of ADHD.

As evidenced by these contributions, the research and application perspectives appear promising, although the mechanisms by which the microbiota influences - or is correlated with - these diseases remain to be further explored.