The past decade has seen an explosion of research in the role of the gut microbiota in modulating brain health and disease. Although most research has focused on stress-related disorders, such as anxiety, depression and irritable bowel syndrome, a growing body of research, albeit largely preclinical, also implicates the microbiota as a disease moderator in neurodegenerative diseases such as Alzheimer’s disease and Parkinson’s disease. In tandem, research has shown that the microbiome plays a critical role in key brain processes involved in neurodevelopment, neuroinflammation, and aging. Currently, research is heavily focused on a better understanding of the precise mechanisms of how the gut talks to the brain and how it may lead to increased susceptibly to brain disorders.

In medicine, the disciplines of neurology and microbiology have largely matured along distinct parallel trajectories, only interfacing in pathological situations when direct infections of the central nervous system occur. However, over the past decade, there has been a revolution in biomedicine with the realisation that the gut microbiota (the trillions of bacteria that reside within the gut) plays a key role in maintaining homeostasis and in programming the major body systems, including even the brain.

A growing body of research is focused on illuminating the bidirectional communication pathways between gut bacteria and the central nervous system, the microbiota– gut–brain axis, however, this is a field in its relative infancy [1]. Changes in the microbiome, its metabolites, and its interaction with the gut-brain axis are associated with a wide array of illnesses including brain disorders. Studying the microbiome requires close collaborative efforts of clinicians with basic scientists and bio-informaticians and works best when traditional discipline barriers between neurology, gastroenterology, and microbiology are broken down.

In preclinical research, a number of experimental models have proven essential to evaluate the microbiome within the context of brain and behaviour, including prebiotic and probiotic intervention, antibiotic administration, faecal transplantation, and the use of germ-free and gnotobiotic animals [1]. In clinical research, most data, especially in the area of neurology, have relied on cross-sectional studies of the microbiome in patients with disease versus healthy age-matched individuals.

Much experimental effort is being placed at trying to dissect the pathways of communication between the gut and the brain. The gut bacteria influences central processes through a variety of mechanisms (Figure 1). Firstly, the microbiota’s ability to synthesize neurotransmitters (i.e. γ-amino butyric acid (GABA), noradrenaline, and dopamine) is an important avenue of communication. Secondly, microbes play a key role in activation of the immune system which can play a fundamental role in ageing, neurological disorders, and neurodegeneration. Finally, microbes produce metabolites including short-chain fatty acids (SCFAs) which are essential for the gut, the immune system, and potentially brain health. Moreover, the gut microbiota and the brain are linked through the vagus nerve, and through the modulation of key dietary amino acids, such as tryptophan.

Given the close association between the gut microbiota and the brain, it is not at all surprising that gut bacteria play key roles in neurological and psychiatric diseases. The strongest evidence for a role of the microbiome in brain function derives from germ-free mice. Studies from a number of research groups in Canada, Sweden, and Ireland have shown that, in germ-free animals, the brain fails to develop normally in the absence of the gut microbiome [2]. Moreover, fundamental brain processes, such as myelination, adult neurogenesis, and microglia activation, have also been shown to be critically dependent on microbiota composition. 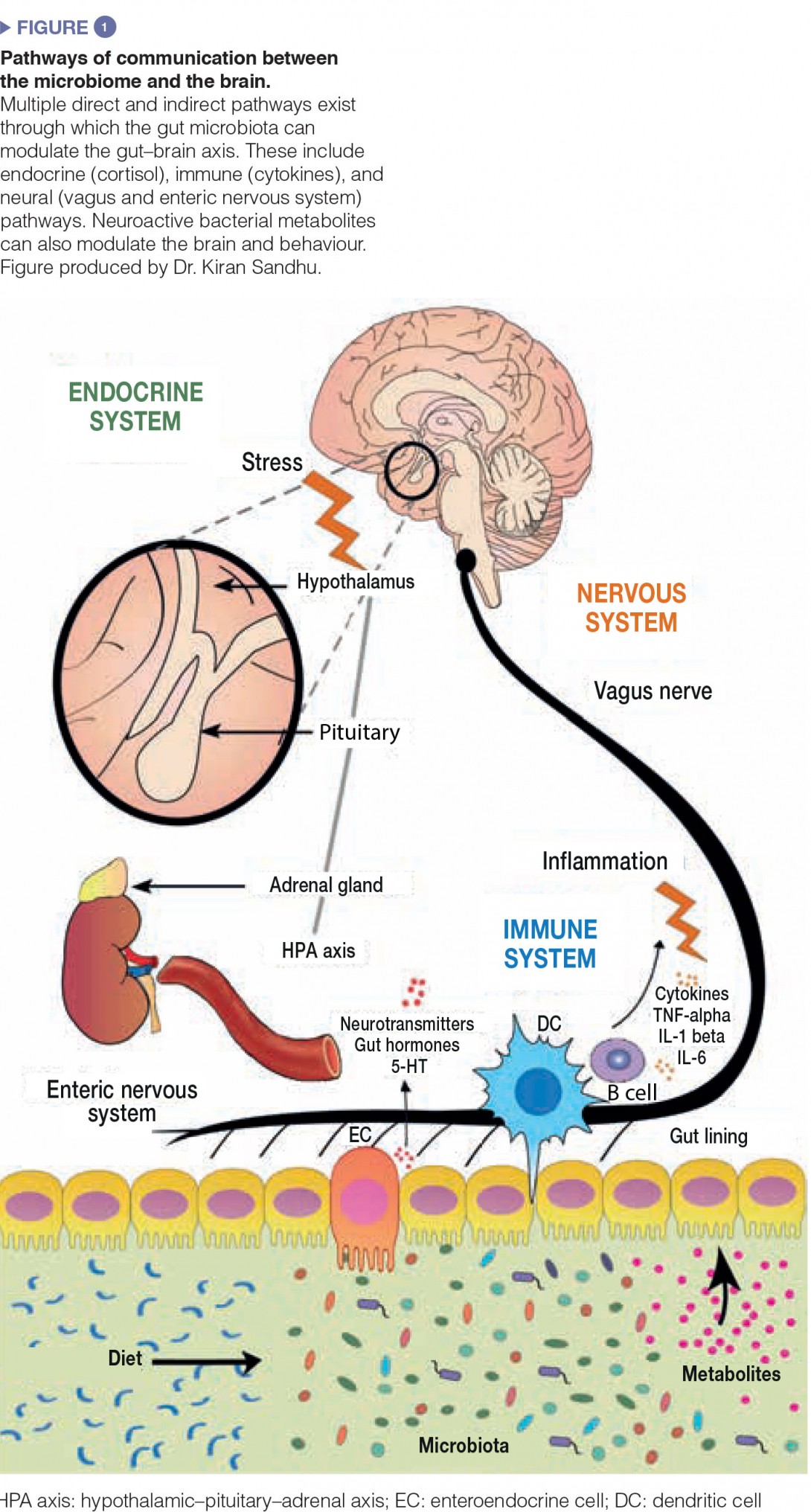 The relationship between the microbiome and the ageing brain is also receiving much attention, which is of particular interest in the field of neurology as many neurological and neurodegenerative disorders occur in old age. Once again, the concept of linking the microbiome to healthy ageing is not new, and this was championed over 100 years ago by Nobel prize-winning immunologist, Elie Metchnikoff, who observed that the villagers in a certain region of Bulgaria lived unusually long lives, a fact he attributed to the presence of lactic acid bacteria in their diet. We have recently revisited Metchnikoff’s original study [3], and shown that the behavioural deficits in aged animals coincide with changes in the microbiome. Moreover, the ELDERMET study has shown that the composition of the gut bacteria in the elderly correlated with their overall health – frailty and the immune system [4]. The greater the microbiome diversity, the better the health outcomes. These investigators went one step further to investigate what is driving the diversity of the microbiome, which they determined to be a diverse diet. As people eat processed bland food (often in nursing homes), the diversity of their microbiomes is reduced, whereas those with a diet rich in fruit and vegetables have better outcomes [4].

A decline in microbial diversity is associated with a concomitant increase in microglial activation which is correlated with brain mass differences in the mouse. This contributes to an age-associated inflammatory response known as “inflammaging”, which in turn has been associated with neurodegenerative diseases such as Alzheimer’s (AD) and Parkinson’s disease (PD). Furthermore, the microbiome has been shown to regulate microglia activation; germ-free mouse brains were shown to express defective microglia, which was partially rescued upon restoration of the microbial community to control levels [5].

There is a growing realisation that the aetiology of PD may actually originate in the gut [6]. Indeed, α-synuclein, the protein aggregate hallmark of PD pathology in the brain, has also been identified in the mucosal and submucosal nerve fibres and ganglia of Parkinsonian patients, with some preclinical evidence even suggesting that α-synuclein in the gut can be transported to the brain via the vagus nerve. Moreover, functional gut symptoms, such as constipation, often occur as prodromal symptoms years before any motor symptoms emerge. Since Scheperjans and colleagues first showed that there are specific alterations in microbiome composition in PD [7], many more studies have emerged [8]. However, to date, there is no consensus as to whether a specific microbial signature exists. When mice were colonized with the microbiota of PD patients via faecal microbiota transplantation, they developed motor deficits and neuroinflammation; two hallmark symptoms of PD [9]. Additionally, symptoms improved when the mice were treated with antibiotics. These studies implicated short-chain fatty acids as drivers of the neuroinflammatory processes in PD [9]. The vagus nerve is particularly well placed as the conduit for signals from the gut to the brain, involving either microbial or prionlike translocation of α-synuclein. Indeed, epidemiological studies based on Danish and Swedish patient registries have shown that truncal vagotomy is protective against PD. Although there has been much excitement in the field, caution is needed when examining the available data as it is largely derived from small cohorts and lacks a longitudinal perspective. Many more mechanistic studies are needed to understand how changes in the microbiota can moderate both the motor and non-motor symptoms of PD and its co-morbidities [10].

The concept that microbes may play a role in the pathophysiology of AD is not new and the notion that amyloid, the aggregation of which is one of the key hallmarks of AD, may act as an antimicrobial peptide in the brain is an intriguing concept [11]. However, it is ethically difficult from the perspective of Koch’s postulate to prove whether there is any infective cause of neuroinflammation and neurodegeneration. As in PD, the relationship between gut proteins and brain health is receiving increased attention with the realization that amyloid-like proteins can be produced by bacteria which has been shown to increase α-synuclein pathology in aged rats and worms [12]. Much more work is needed to validate such strategies in humans.

Recently, cross-sectional studies have identified that Escherichia/Shigella bacterial taxa, which are associated with mediating inflammation, were increased in faecal samples from AD patients relative to control subjects. Moreover, the microbiota changes correlated with pro-inflammatory cytokine levels in whole blood [13]. Such results suggest a causal link between dysregulation of the microbiota and systemic inflammation, which may initiate or exacerbate neurodegeneration in the brain in AD. However, these are still relatively small studies and much more research is needed in larger cohorts to assess the causal relationship between the gut microbiome and AD.

In parallel, a number of transgenic mouse models of AD have been shown to have an altered microbiome [14]. Seminal studies in germ-free mice showed that there is a marked absence of amyloid plaque buildup and neuroinflammation when microbes are not present [14]. Similarly, chronic treatment of APP/PS1 transgenic mice with an antibiotic cocktail reduced microglial and astrocyte accumulation surrounding amyloid plaques in the hippocampus and led to a decrease in insoluble A plaques [15]. Together, these studies unequivicolly place the microbiome as a regulator of key molecular components of AD.

It is clear that the microbiome is critically important for the appropriate development and maintenance of brain function. Moreover, as outlined above, there is accumulating evidence from both animal and clinical studies implicating the microbiome in a variety of neurological and neurodegenerative diseases. Given the marked effects of the microbiota in regulating brain function, it is plausible that its composition affects the progression, susceptibility, and treatment of almost all neurological disorders. Nonetheless, there are marked gaps in our knowledge regarding the role of the microbiome in other neurodegenerative diseases, such as amyotrophic lateral sclerosis or Huntington’s disease, and caution is needed to not over-interpret such studies. The field needs to move away from corelative studies towards mechanistic causal approaches. Moreover, more interventional studies are needed using probiotic strains and prebiotics, and even faecal microbiota transplants may potentially be important in the field. It is possible that similar approaches could target different disorders, for example, the modulation of T lymphocyte signalling to the brain may be useful in dampening down the neuroinflammatory status in patients following stroke, as well as in patients with AD and during ageing.

With regards to clinical neurology, many patients are on multiple medications and there is a growing understanding of the relationship between the microbiome and drug action. Thus, all studies should aim to differentiate between the impact of drugs and that of disease on the microbiome. Moreover, temporal studies with presymptomatic individuals will be important to determine the potential role of the microbiome as a biomarker of disease.

Diet is perhaps one of the greatest factors that influences the microbiome. As many neurological disorders affect appetite, swallowing, and diet in general, it is essential to have good nutritional data for all human studies in the future. In addition, this will further enable a better understanding of the relationship between diet, the microbiome, and the brain, which is critical both in early life and as we age.