Although increasing evidence suggests a role for the gut microbiota in neurodevelopment, the actual structure and composition of microbiota in children with attention-deficit/hyperactivity disorder (ADHD) remain unclear.

An operational taxonomical unit (OTU)-level analysis revealed a significant decrease in the fractional representation of Faecalibacterium in children with ADHD compared to HC. In individuals with ADHD, the abundance of Faecalibacterium was negatively associated with parental reports of ADHD symptoms. However, there was no significant difference in alpha diversity between the ADHD and control groups.

This present findings support the involvement of microbiota alteration in psychiatric diseases and Faecalibacterium may represent a potential novel marker of gut microbiota in ADHD. Future studies are needed to validate these findings and to elucidate the temporal and causal relationships between these variables [1].

In recent years, the gut and gut microbiota have gained important status in human biology, perceived by some authors as a “second or third brain”. The gut-brain axis is being studied more precisely, and impairments in its function are being investigated with regards to various neurological and psychiatric disorders. Gut microbiota impairment has been highlighted in autism as well as in other psychiatric disorders. Regarding ADHD, no study has precisely analyzed the gut microbiota, but some authors suggest that a dysbiotic gut microbiota may play a role (symptoms improve under probiotics and worsen under antibiotics, and delivery by Caesarean section is a risk factor for the disease). 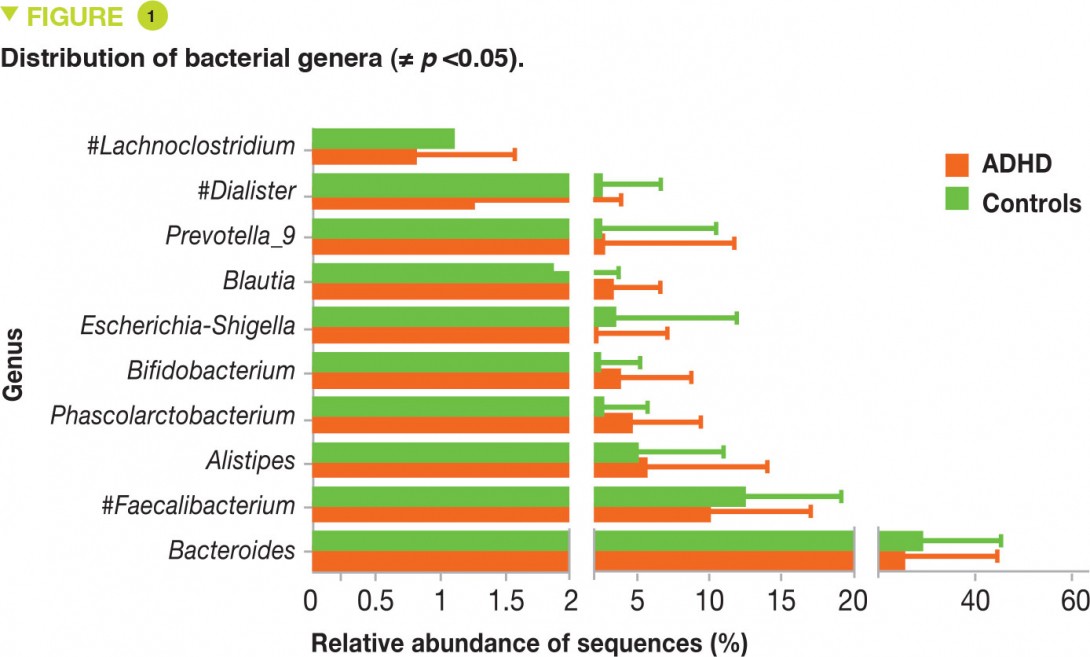 The authors included 51 children with ADHD, aged 6-10 years, and 32 matched controls from a Chinese hospital, from May 2015 to December 2016. The diagnosis of ADHD was based on the Kiddie- SADS-PL questionnaire that is included in the diagnostic manual of mental disorders: Diagnostic and Statistical Manual of Mental Steenvoorde-IV classification system (DSM-IV). Parents completed a questionnaire to assess the severity of ADHD symptoms (Conners Parent Rating Scales). Children with specific diets, probiotic or antibiotic treatment within the previous 2 months, digestive disorders, depressive or anxious symptoms, obesity, an atopic background, and/or medically treated for their ADHD were excluded. No difference was identified between the two groups for age, sex, BMI, delivery, or feeding formula (breast-feeding). The analysis of the gut microbiota, carried out through pyrosequencing of 16S RNA and OTU analysis, showed no difference in bacterial diversity (alpha and beta). The four major phyla in all samples were Firmicutes, Bacteroidetes, Proteobacteria and Actinetobacteria, with no difference between ADHD children and controls. However regarding genera, the levels of Faecalibacterium, Lachnoclostridium and Dialister were reduced in ADHD children (Figure 1). The abundance of Faecalibacterium negatively correlated with the severity of ADHD and the hyperactivity index (Figure 2). 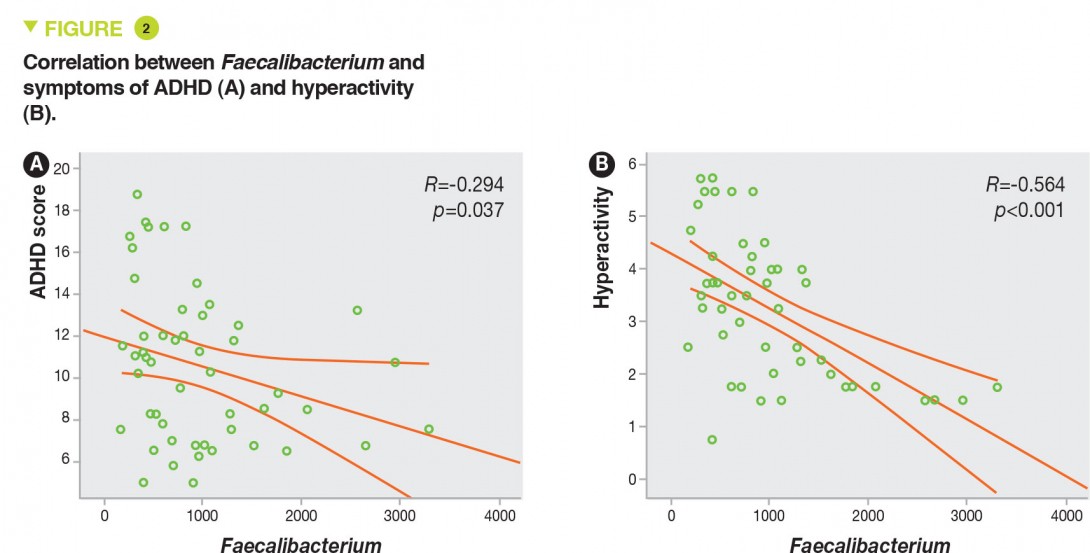 What are the  practical consequences?

If disturbance of the gut microbiota is involved in ADHD (as in other disorders), care should be taken to provide appropriate prescription of antibiotics in children, a fortiori in infants, to prevent further development of these disorders.

In ADHD, it might be useful to target Faecalibacterium by increasing its level in the gut. Dietetically, this is promoted by a Mediterranean diet and probably reduced by a Western diet. In addition to this dietary approach targeted on Faecalibacterium, it is also necessary to reduce gut inflammation, which is supported by a decrease in Faecalibacterium.

This pilot study has shown that the gut microbiota is disturbed in ADHD. This dysbiosis was more specifically related to Faecalibacterium, a genus that negatively correlated with the severity of ADHD symptoms.