Introduction to the gut microbiota

Gut microbiota, the largest human organ, has 10 times more cells (1014) than the human cells in the body (1013) [2]. The functions of the GM include, digestion of food, metabolism of the drugs and toxins and their detoxification, vitamin synthesis, prevention of attachment of pathogenic bacteria to the gut wall, modulation of immune, neuro-hormonal, central nervous system functions [2]. Considering the diverse functions of the GM, its alteration is expected to be associated with several diseases and its modulation to be beneficial.

Microbes are well-known to cause several cancers (Figure 1) [3]. Recently, emerging data suggest the role of dysbiosis in CRC. Fecal microbiota of patients with colonic polyposis resembles that of CRC. Whereas Clostridium spp., Bacteroides and Bifidobacterium spp. are associated with CRC, lactic acid-producing bacteria (e.g. Lactobacillus spp. and Eubacterium aerofaciens) are negatively associated. GM associated production of methane, H2S, and presence of Streptococcus bovis may play role in CRC development. Obesity, recently thought to be related to GM, is a predisposing factor for CRC. 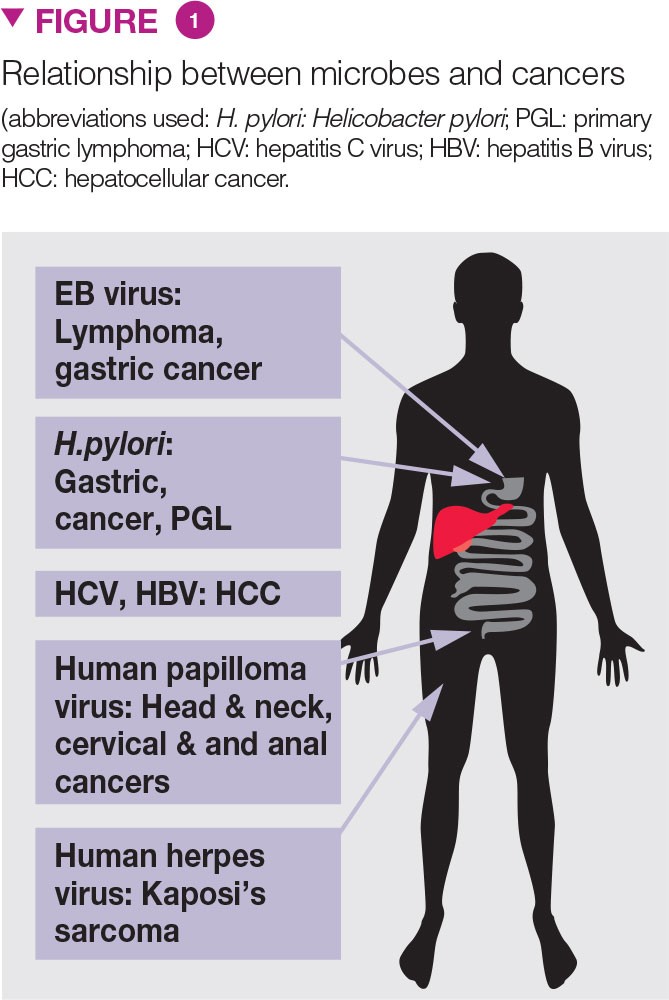 Calorie extraction from foods not only depends on digestive function of the small bowel, but also on the extraction of malaborbed calorie by the colonic microbiota. Whereas presence of Firmicutes is associated with greater calorie extraction, Bacteroidetes have opposite effect [4]. Examples from the Nature include development of obesity in elephants in spite of their low-calorie diet. In animal husbandry, use of low-dose antibiotic from the childhood increases the amount of meat. The difference in the fecal microbiota among obese and non-obese individuals have been shown. In a retrospective cohort study from the UK, of 21,714 infants, 1306 (6%) became obese at 4-y of age. On logistic regression analyses adjusting for mothers’ and sibs’ obesity, maternal diabetes, mode of delivery, socioeconomic status, year and country of birth, and urban dwelling, antibiotic exposure before 2-y age was associated with development of obesity and the number of exposure correlated with it [5].

NAFLD, associated with metabolic syndrome may have dysbiosis including a quantitative increase in upper gut bacteria (SIBO ≥105 colony forming unit, CFU/mL, and low-grade ≥103 CFU/ mL) [6].An uncontrolled and three casecontrol studies showed SIBO to be associated with NAFLD [6]. Two studies showed lower relative abundance of Bacteroidetes, and higher abundance of C. coccoides, and Prevotella in NAFLD patients. Higher extraction of calorie from unabsorbed complex carbohydrates, insulin resistance and endogenous production of alcohol may contribute to the pathogenesis of NAFLD due to dysbiosis.

GM plays important role in glucose metabolism, insulin resistance, diabetes, and has implication in its treatment. Patients with diabetes have different fecal microbiota than the control population [4]. GM was shown to be an important factor regulating glucose levels after intake of different foods independent of physical exercise, lifestyle, and anthropometric measures [7]. Metformin, an oral hypoglycemic, may partly work by altering the GM. Though studies on the role of GM on coronary artery disease are scanty and results mixed, data suggesting its role in this condition is emerging.

Antibiotic use is high in Asia and the implementation of policies for appropriate use is poor, with risk of emergence of antibiotic-resistant “super-bug”.Reasons for misuse of antibiotics include, unrestricted availability, and use in inappropriate indications e.g. common cold, acute gastroenteritis due to non-invasive pathogens. Use of probiotics, when indicated, may help to contain misuse of antibiotics.

Manipulation of gut microbiota using agents other than antibiotics

Though GM manipulation using rifaximin is well-known, probiotics and fecal transplantation have potential to treat dysbiosis associated disorders, e.g. antibiotic-associated diarrhea (AAD), IBD, IBS, Clostridium difficile-associated diarrhea (CDD), and as a co-prescription during anti-H. pylori treatment. ACG made a weak recommendation (from 23 randomized controlled trials, RCTs) that probiotics improve global symptoms, bloating, and flatulence in IBS [8]. A Cochrane review showed probiotics to be useful for preventing CDD [9]. A metaanalysis showed multi-species probiotics to induce and maintain remission in UC, though data on Crohn’s are scanty [10]. Shorter anti-H. pylori treatment duration is well-known to reduce frequency of its eradication; meta-analyses showed that probiotic co-administration increase the eradication rates due to lower adverse effects and better compliance [9]. H. pylori eradication treatment may lead to fecal dysbiosis and co-administration of probiotics may restore eubiosis.

In an attempt to form an Asia-Pacific Consortium on GM similar to European and North American groups, and to review the current evidence supporting manipulation of GM using probiotics in gastrointestinal disorders in the Asia- Pacific region, a consensus has been developed and published recently [9]. The major conclusions of this consensus were: there is growing evidence to support the therapeutic potential of probiotics in modulating gastrointestinal functions and relieving symptoms of these disorders, but more research is needed both in Asia- Pacific regions and internationally [9].

Antibiotic treatment in infants: short and long-term consequences of the microbiome