In children and adolescents

Functional abdominal pain associated with pediatric FGIDs may assume various forms which should be clearly identified for correct management. In many cases it is triggered by irritable bowel syndrome.7

Even though irritable bowel syndrome is the most common FGID in children and a real public health issue at global level, it remains overlooked. The very perception of this condition seems to vary significantly between countries and studies, since its prevalence varies from 5.1% in the United States to 22.6% in Turkey, and ranges from 2.8% to 25.7% in some Asian countries. Such differences could possibly be ascribed to local particularities, but are more probably due to interpretations of the Rome IV diagnostic criteria that vary depending on culture, relationship to pain and what is considered a true disease–and not a simple change in bowel movements.

Characterized by a less diverse gastrointestinal microbiota (especially in contact with the mucosa), increased levels of some Clostridia and Firmicutes (Veillonella) and reduced levels of bifidobacteria (Table 1), IBS represents 40 to 45% of FGIDs in children. The therapeutic education of the parents occupies a central place in its treatment, as their anxiety can have a significant impact on the severity of symptoms and the efficacy of treatment, whether it is pharmacological or not. Standard drugs are those used to treat IBS in adults: gastrointestinal motility stimulants, antispasmodic agents, antacids, antihistamines, antireflux agents… whose efficacy has not been evaluated. A literature review suggests that among non-pharmacological treatments, some psychological approaches (mental imagery, hypnosis, cognitive behavioral therapy, yoga) could help improve the child’s health. In view of the disruptions of the microbiota identified in young IBS patients, the use of probiotics is also a promising therapeutic option. 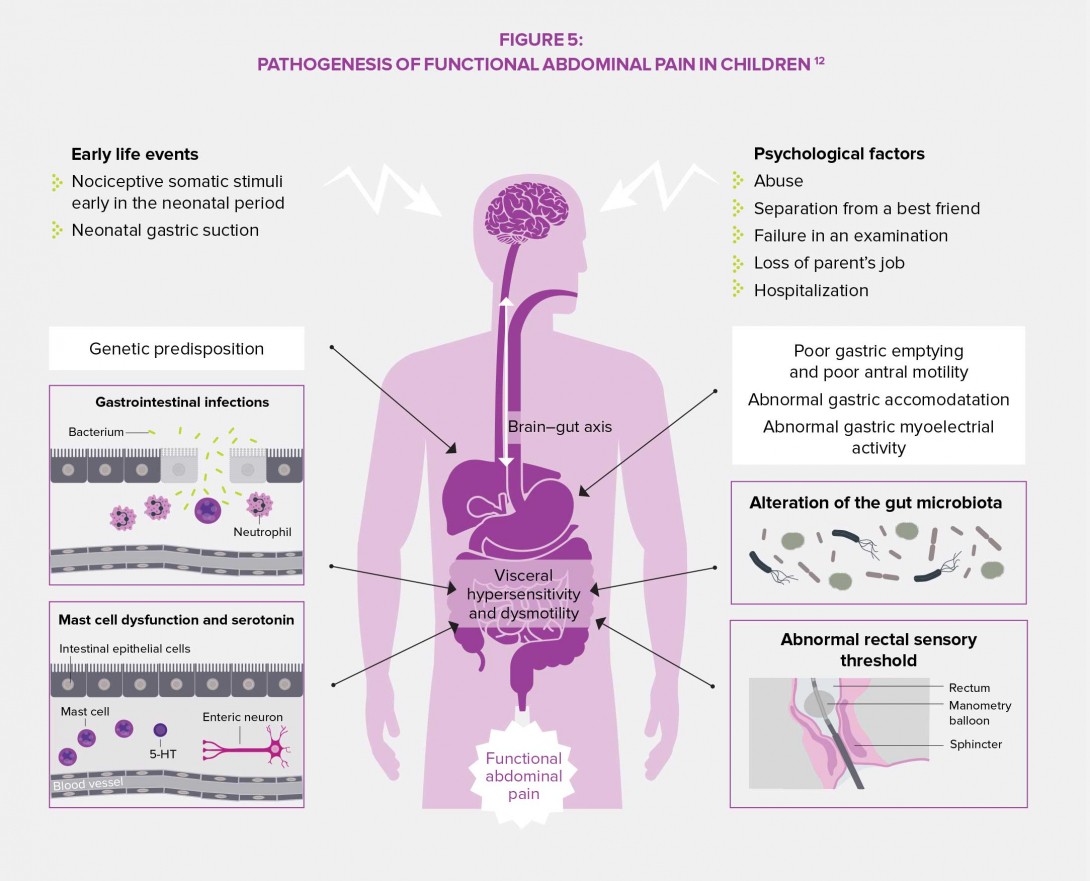 A multitude of factors predispose to the development of IBS: gender, age, psychological factors, neonatal trauma, gastrointestinal infections, asthma, atopic disorders, diet, socioeconomic, familial and environmental factors… Some of these may represent potential areas for the implementation of preventive actions which would aim to reduce the prevalence of disorders in children and adults weakened during their childhood, as well as decrease individual and societal healthcare costs. It is the responsibility of the different healthcare systems to prioritize their approaches and actions according to risks, needs, and possibilities.