Focus on the gut-brain axis

Psychic disorders influence the development of FGIDs, and conversely, through the gut-brain axis. In this regard, the intestinal microbiota could have an impact on the expression of psychiatric symptoms.

Psychological and psychosocial factors are key to understanding the pathophysiology of FGIDs. Psychic disorders (anxiety, depression, neurosis…) are frequent comorbidities in patients with FGIDs. It is however difficult to determine whether the former generate the latter, or if it is the opposite.4,5,6 Recent studies clearly concluded that bidirectionality is at play, i.e. a reciprocal influence. At a visceral level, exchanges are based on the enteric nervous system and substances produced by intestinal bacteria (SCFA, metabolites…). At a central level, the involved structures are those of the emotional motor system (anterior cingulate cortex, hippocampus, hypothalamus…).4,5,6

ROLE OF THE GUT-BRAIN AXIS IN IBS

Animal models have revealed that bidirectional communication was disrupted in patients with IBS, although mechanisms ensuring communication between microbiota and brain have not been elucidated. However, several elements that appear to contribute to this mechanism have been identified: the microbiota sends signals to the CNS through enteroendocrine cells (release of serotonin), dendritic cells and B-cells (release of cytokines), products of bacterial metabolism (SCFA, GABA…) and stimulation of vagal afferent fibers. In the other direction, stress and feelings affect the composition of the microbiota through stress hormones and sympathetic nervous system.4,5,6 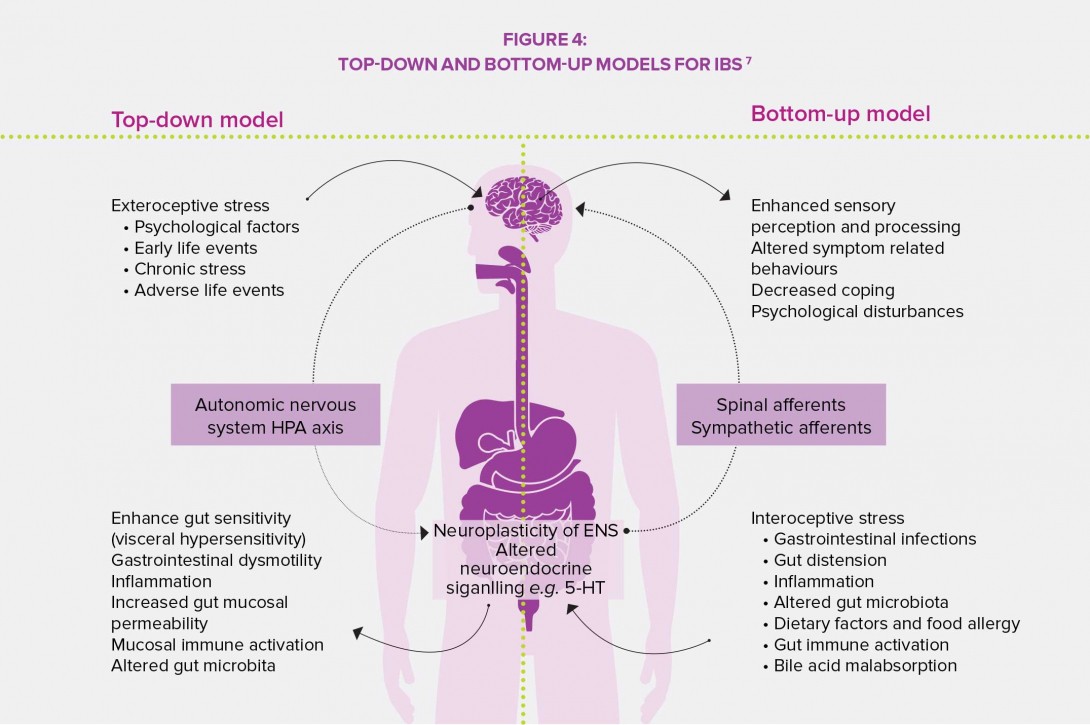 Dossier detail
Functional gastrointestinal disorders: a set of diseases defined in correlation with the intestinal microbiota
In newborns
Focus