Functional gastrointestinal disorders: a set of diseases defined in correlation with the intestinal microbiota

The intestinal microbiota: etiologic factor or avenue of therapeutic response for FGIDs? Both assumptions are progressively confirmed and completed as scientific advances are made. Nevertheless, the use of diagnostic classification is met with limits in clinical practice and leads to frequent delays in diagnosis. Mechanisms involved in the microbiota-FGID relation still need to be specified, including neuroendocrine processes involving the gut-brain axis.

Viewed as shameful in many cultures, functional GI disorders were long regarded as a private matter and related to stress and feelings rather than an easily identifiable organic trouble. The perception changed in the years 1960’s thanks to technical and scientific advances: works on etiology and pathophysiology provided a foundation for an organic understanding of FGIDs. In the following decades, the “all physiological” vision was gradually abandoned and the related psychosocial processes were deepened, before the standard modern biopsychological model was ultimately reached.

In the fourth edition of its work of reference (Rome IV), the Rome Foundation proposes a definition of FGIDs collaboratively designed by a panel of experts: they include disorders of the gut-brain axis, i.e. a “group of disorders classified based on gastrointestinal symptoms, related to a combination of the following: motility disturbance, visceral hypersensitivity, deterioration of the mucosa and immune functions, change in intestinal microbiota and alteration of central nervous system functions”. The result of that review is a precise categorization of FGIDs as well as a rationale for their study and treatment. 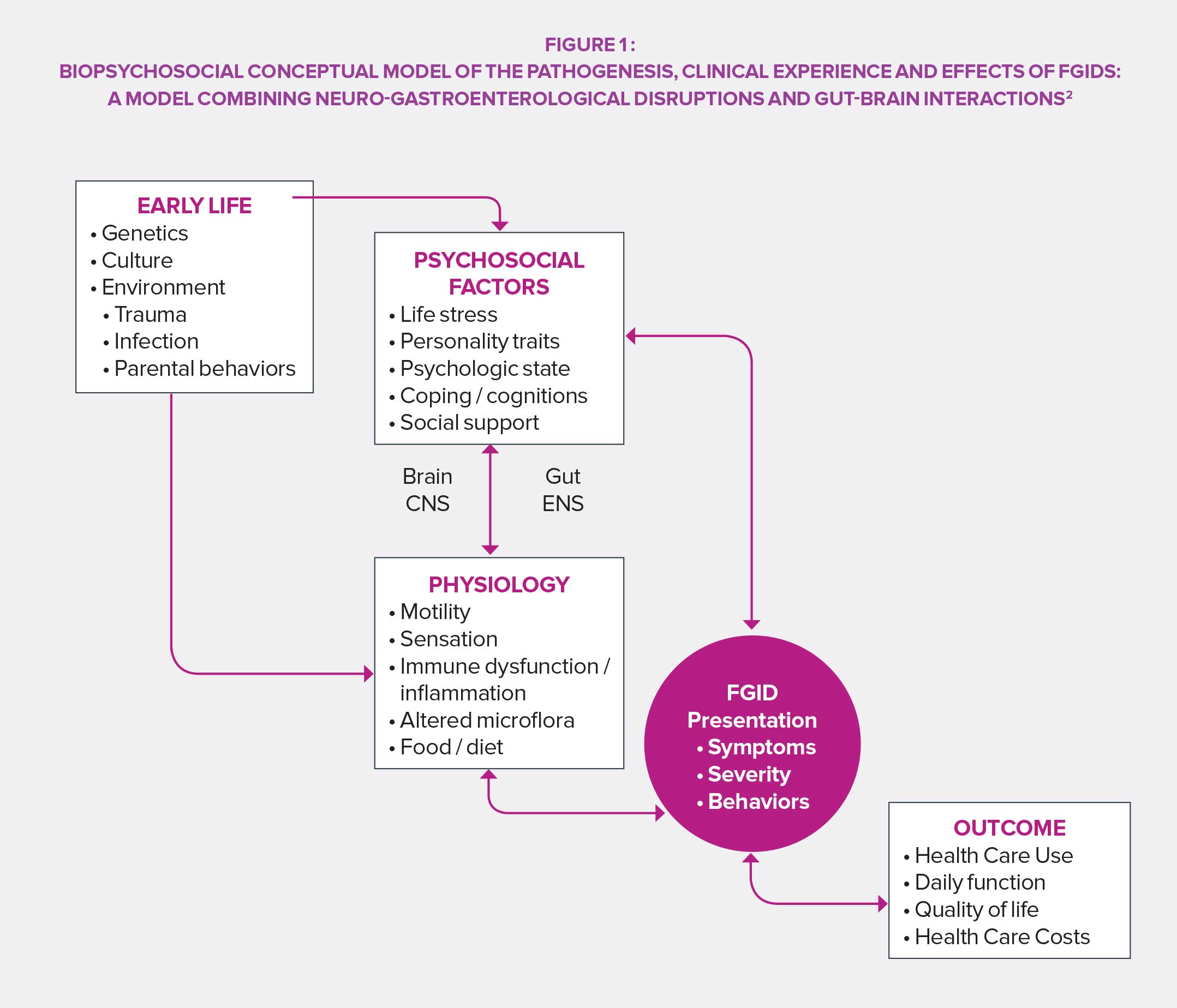 The Rome IV classification is based on symptomatic criteria grouped by anatomic region (esophageal, gastroduodenal, intestinal, biliary and anorectal). However, symptom location by itself is not enough, especially regarding irritable bowel syndrome (IBS), functional dyspepsia, or abdominal pain syndrome (hard to place and influenced by global effects resulting from deregulation of signaling pathways between central and enteric nervous systems) mediated by the central nervous system. Its 33 items for adults and 20 for newborns, children and teenagers ensure a precise diagnosis and facilitate the implementation of targeted patient care. In this regard, the Rome Foundation insisted on the importance of not limiting therapeutic approaches to medication alone and recommends a biopsychosocial approach to face the variability of cases and individual expectations of patients suffering from FGIDs. 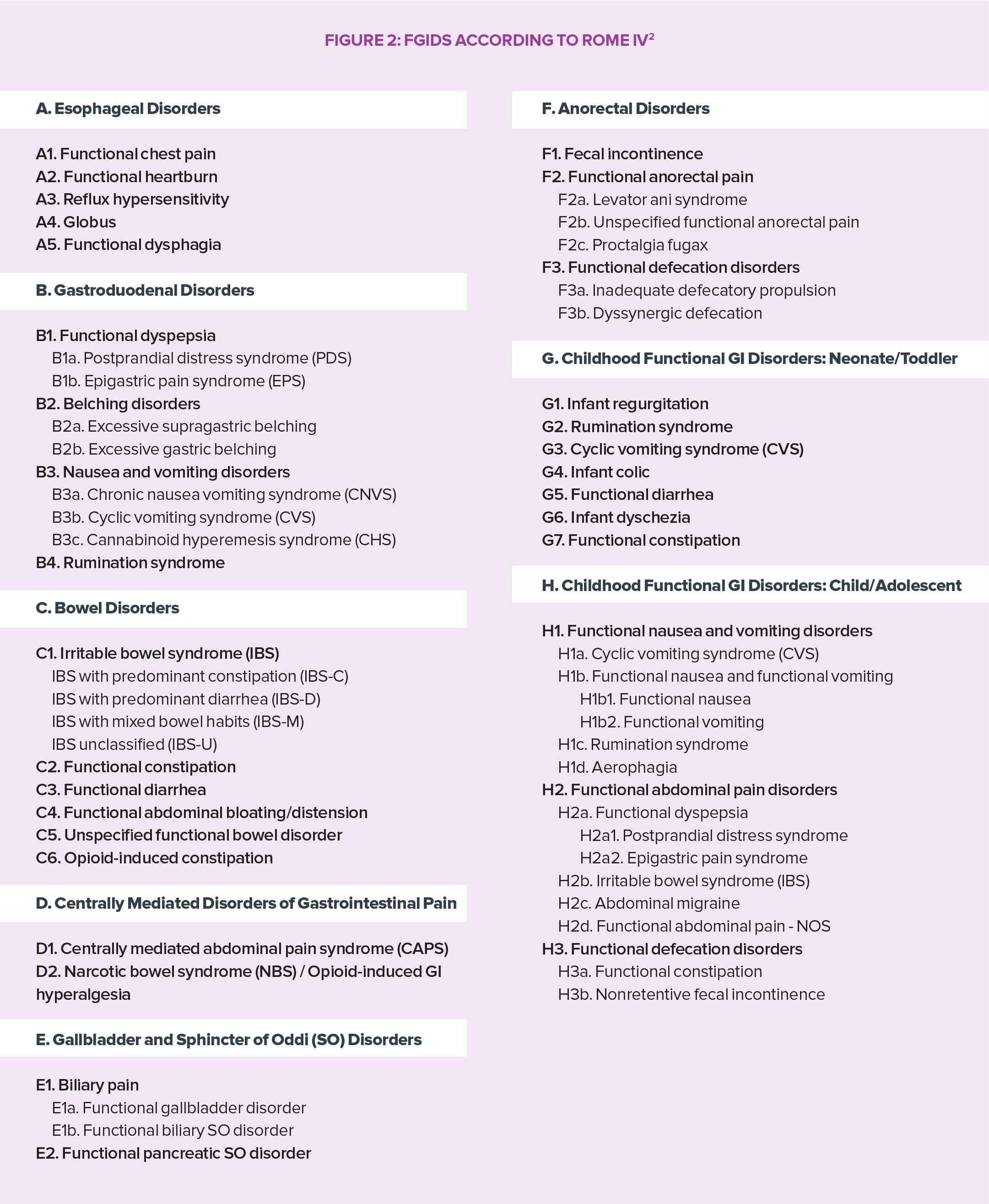 The intestinal microbiota has a complex influence on the metabolism, nutrition and immune functions of the host. Its alteration plays a central role in FGIDs.3,4 Dysbiosis has been specifically studied regarding IBS and studies in animals have shown that this imbalance might be involved in the observed visceral hypersensitivity (via endoluminal bile acids), as well as in gastrointestinal dysmotility through the expression of enzymes involved in the synthesis of neuromodulators (gamma-aminobutyric acid [GABA], for instance) and products of colonic fermentation (gas or short-chain fatty acids, SCFA). Finally, dysbiosis seems to promote the disruption of the intestinal barrier: increased intestinal permeability would thus improve the crossing of bacterial antigens responsible for low-grade inflammation leading to sensitization of sensory afferent fibers of the enteric nervous system.3,4

Heterogeneity of FGIDs and contradictory results in terms of bacterial composition depending on studies and methods do not allow microbiota and its metabolites to be used as relevant markers for diagnosis, monitoring of the progression of the disease, or treatment response. Literature confirms however the importance of diversity and composition of the intestinal microbiota in the pathophysiology of FGIDs, and consequently the potential impact of approaches related to modulations of intestinal bacterial populations. 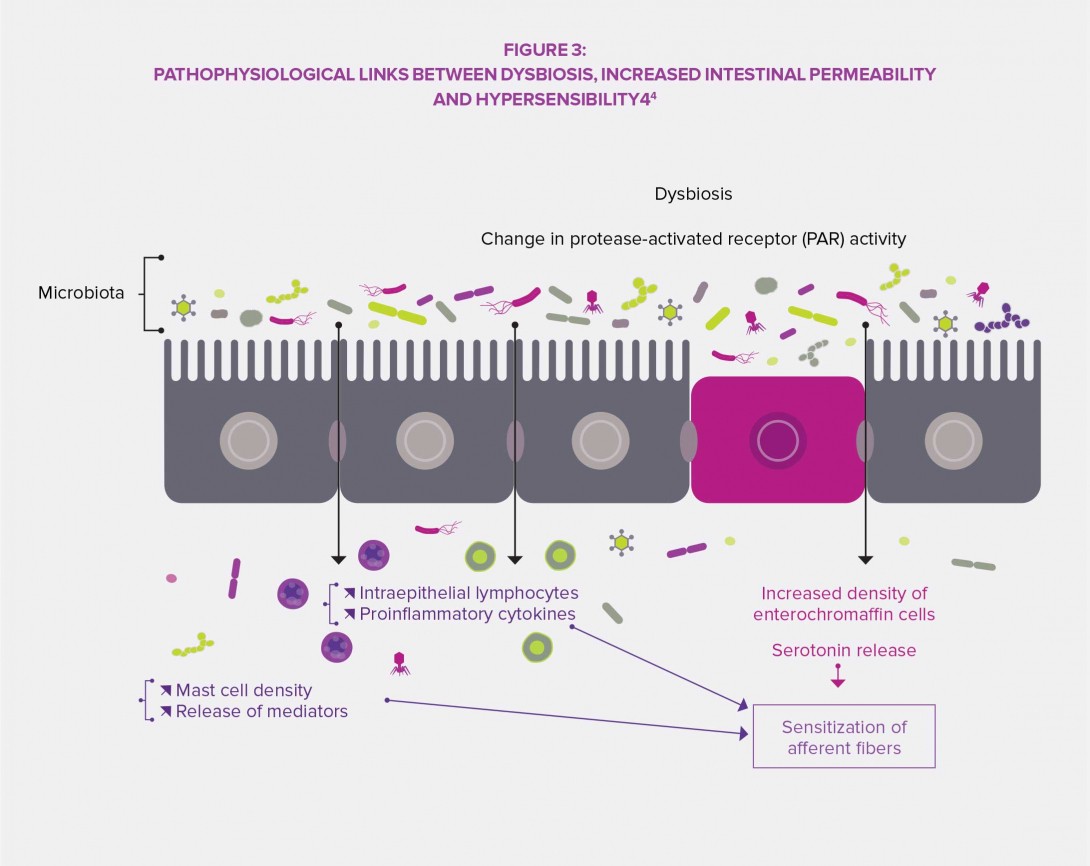