Diet modulates the gut microbiome, which in turn can impact the immune system. In this article, the authors determined how two microbiota-targeted dietary interventions (one involving enrichment with plant-based fibre and the other fermented foods) influence the human microbiome and immune system in healthy adults. Using a 17-week randomised, prospective study (n = 18/arm) combined with omics-based measurements of microbiome and host, including extensive immune profiling, the authors identified diet-specific effects. High-fibre diet increased the number of microbiome-encoded degrading carbohydrate active enzymes (CAZymes) despite having no effect on microbial community diversity. Although cytokine response score was unchanged, “immunological” response in high-fibre consumers was observed and depended on baseline microbiota. However, the high fermented-food diet steadily increased microbiota diversity and decreased inflammatory markers. The data highlighted how coupling dietary interventions to extensive and longitudinal immune and microbiome profiling can provide individualised and population level information. Fermented foods may be valuable in countering decreased microbiome diversity and increased inflammation, which are pervasive in industrialised societies.

In humans, the link between diet and microbiota has been demonstrated in a number of ways, including by correlating dietary habits and the diversity or composition of the microbiota [2]. Short-term changes in diet can also rapidly change human gut microbiota [3]. Given that the microbiota plays a major role in human biology, its management, especially through nutritional interventions, could represent a major way of changing various aspects of health. A key question is to determine whether general (not personalised) dietary recommendations can be issued based on existing
microbiota-host interactions to improve the health of populations. Many chronic non-communicable diseases, whose incidence is rapidly increasing with industrialisation, are linked to chronic inflammation. Industrialisation-related changes in gut microbiota are also well documented. Given the influence of the microbiota on inflammatory status, it is possible that a microbiota- targeted diet could reduce systemic inflammation. Many publications have confirmed the role of fibre in health, particularly by stimulating microbiota diversity along with the positive role of short-chain fatty acids, which are a product of their fermentation by the microbiota. Dietary fibre enrichment has an impact on the microbiota and improves health markers [4]. These results and the inadequate fibre intake in the average Western diet suggest that fibre intake may be a way to modulate the human immune system via the microbiota. Several reports suggest that fermented foods, such as kombucha, yoghurt and kimchi, may offer health benefits, including weight maintenance and reducing the risk of diabetes, cancer and cardiovascular diseases [5]. 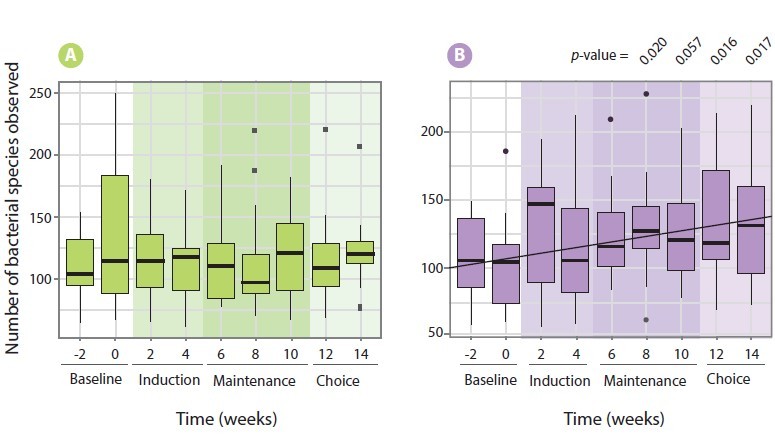 A. Fibre consumption in the high fibre diet group.

To examine the effect of diet on the microbiome and immune system, healthy adults were recruited to participate in a 10-week dietary intervention programme (18 subjects per group). Participants were given either a high-fibre diet (an average increase from 21.5 ± 8.0 g daily to 45.1 ± 10.7 g daily) or a diet rich in fermented foods (an average increase from 0.4 ± 0.6 to 6.3 ± 2.9 portions daily). Surprisingly, a high-fibre diet did not increase microbiota diversity (Figure 1A), possibly due to an insufficient capacity of the microbiota of participants to breakdown carbohydrates. However, an increase in the abundance of plant carbohydrate-degrading enzymes was reported. Decreased branched-chain fatty acids (isobutyric, isovaleric and valeric acid) was observed, although it was impossible to determine whether this finding was due to a functional change in the microbiota or a decrease in the consumption of dairy products and beef, which contain high levels of these molecules. A diet-related effect on the immune profile was observed and was dependent on the baseline microbiota of the participants.

Unlike a high-fibre diet, a diet rich in fermented foods increased microbiota diversity (Figure 1B). This increase was not primarily related to the colonisation of the
probiotic bacteria consumed, but rather to the acquisition of new bacteria or the expansion of certain endogenous bacteria. Finally, the consumption of fermented food resulted in decreased systemic inflammatory levels with a decrease in several cytokines, chemokines and other inflammatory serum proteins, including interleukin IL-6, IL-10 and IL-12b.

This study showed that diet has profound effects on gut microbiota and host physiology, thus confirming its role in health and potential disease-prevention. The effects of diets rich in fibre and fermented foods differ widely. Improving the definition of the effects of diet on the microbiota and host physiology will allow preventative or therapeutic strategies to be implemented on both a population-wide and individual level.

This prospective randomised study evaluating the effect of a diet enriched with fibre or
fermented foods shows the specific effects of each type of diet on the microbiota and
host immunity, thus confirming the key role of diet in health, particularly through its effects on gut microbiota.

Article
Could the gut microbiome be targeted to optimize Sars-CoV-2 vaccine efficacy?
Ethnicity associations with food sensitisation are mediated by gut microbiota development in the first year of life
Focus

Plausibility of a pathophysiological role for altered gut microbiota in the irritable bowel syndrome Could the gut microbiome be targeted to optimize Sars-CoV-2 vaccine efficacy?