A page turns: with the advent of antibiotics in the 20th century, this type of therapy, despite its undoubted usefulness in fighting infections, now raises serious concerns for health, notably with microbiota dysbiosis and antibiotic resistance.

Though a more rational use of antibiotics has long been overdue, we must not lose sight of the fact that over the course of the last 80 years their widespread use has saved many millions of lives. They have served as our principal weapon in the fight against bacterial infections. Alongside vaccinations, they have added around 20 years to the average life.1

FROM THE ANTIBIOTIC ERA TO THE MICROBIOTA ERA

Unfortunately, antibiotics eliminate not only pathogenic bacteria, but commensal ones too.2 The intestinal microbiota is affected, and likewise all the other human microbiota (cutaneous, lung, urogenital...) that protect against pathogen overgrowth. While it remains difficult to define a healthy microbiota with any precision or to provide an adequate description of dysbiosis, science is beginning to understand the ways in which antibiotics affect the functioning of these ecosystems and likewise the consequences of such changes for health over the short and long term3 (See Figure 1).

"Dysbiosis" is not a homogenous phenomenon: it varies according to the state of health of each individual. It is commonly defined as a compositional and functional alteration in the microbiota, driven by a set of environmental and host-related factors that perturb the microbial ecosystem.4

Because of the widespread overuse and misuse of antibiotics in humans and animals, bacteria causing both benign and life-threatening infections are becoming increasingly resistant to them. In 2015, antibiotic-resistant pathogens were estimated to be causing over 50,000 deaths each year in Europe and the United States.3 “Antibiotic resistance is one of the biggest threats to global health, food security and development today” states the WHO. 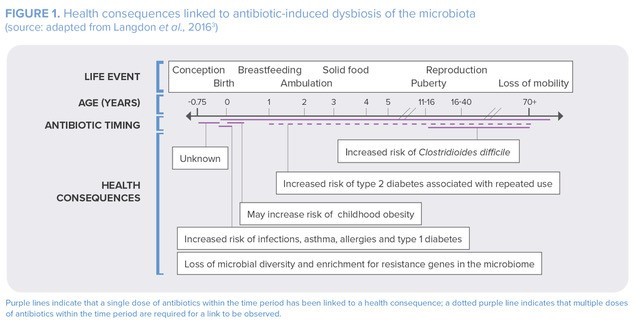 3 Langdon A, Crook N, Dantas G. The effects of antibiotics on the microbiome throughout development and alternative approaches for therapeutic modulation. Genome Med. 2016;8(1):39.

Ears, Nose and Throat microbiota: when antibiotics challenge our first line of defense