Historically, until recent scientific work, urine was regarded as sterile. Compared to other microbiota, this ecosystem has low biomass.1 While a consensus regarding the precise composition has yet to be reached, around 100 species have been identified from 4 principal phyla (Proteobacteria, Firmicutes, Actinobacteria, and Bacteroidetes).2 And though the role of the urinary microbiota is currently a matter of debate, it is well understood that diminished diversity seems to be a risk factor for urinary tract infections.

After antibiotic treatment, 10 to 30 % of women develop vulvovaginal candidiasis5

Yet, the vaginal microbiota gains on the other hand from having low diversity and being largely dominated by lactobacilli.3 Despite considerable variability among women, 5 community state types (CST) have been described in the vaginal flora: 4 dominated by one or several species of the Lactobacillus genus (L. crispatus, L. gasseri, L. iners or L. jensenii) and one polymicrobial.4 In both cases, dysbiosis following antibiotic treatment may increase the risk of infection.5

A spectrum of fungus at each antibiotic treatment

This is what many women being treated with antibiotics dread: developing post-antibiotic vulvovaginal candidiasis. This anxiety is more than justified: antibacterial therapy, whether systemic or applied locally to the vagina, is thought to be one of the main factors leading to vulvovaginal candidiasis.5 This infection may be associated with vaginal microbiota disruption together with Candida yeast proliferation (C. albicans in the majority of cases ; Figure 3). The most common clinical signs of this infection are vulvar pruritus, a burning sensation accompanied by vaginal pain or irritation that may lead to dyspareunia or dysuria.6 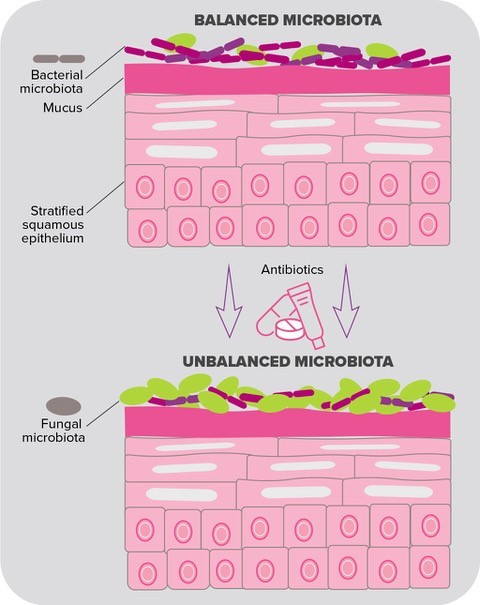 Urinary tract infections: what to prescribe?

According to the 2017 update of the German clinical guidelines on managing uncomplicated urinary tract infections in adult patients:9

The vicious circle of bacterial vaginosis

Though the etiology of bacterial vaginosis (BV), the main form of vaginal infection, remains unclear, it is believed that antibiotic-induced dysbiosis could be partly responsible for its development: dominant lactobacilli are supplanted by polymicrobial flora derived from numerous bacterial genera (Gardnerella, Atopobium, Prevotella, etc.). A vicious circle could be initiated: though antibiotics can be used to treat BV, they are also, alongside sexual history, vaginal douching, contraceptive use, age, stage in the menstrual cycle, tobacco use, etc., among the numerous risk factors associated with this type of infection.7

Urinary tract infections (UTI) affect millions of men (a 3% annual incidence rate in the US) and women (10%) every year.8 Recurrent UTIs contribute greatly to this incidence: notwithstanding their receiving appropriate antibiotic therapy, more than 30% of women will experience a subsequent infection within the following 12 months.8 UTIs are becoming increasingly difficult to treat because of the rapid spread of drug resistance among Gram-Negative organisms, notably UPEC (uropathogenic Escherichia coli) which cause approximately 80% of UTIs.8

Paradoxically, broadspectrum antibiotics used to treat both community acquired and hospital-associated UTIs have become a risk factor for their occurrence.8 Mechanisms involving both gut and vaginal microbiota are suspected: in the gut, the ultimate reservoir for UPEC, antibiotic exposure increases inflammation and promotes the proliferation of E. coli; in the vagina, they diminish colonization by Lactobacillus species that suppress vaginal UPEC invasion and subsequent bacterial ascension from the vagina into the urinary tract. This is the reason why, experts nowadays recommend that they should be used with caution and that microbiota-sparing treatments should be developed.8

In cases of acne, the use of antibiotics should be limited or should be accompanied by probiotic cures to preserve the balance of the vaginal microbiota.

Ears, Nose and Throat microbiota: when antibiotics challenge our first line of defense

What to take away?
Gynecology