Environmental enteric dysfunction (EED) is an enigmatic disorder of the small intestine that is postulated to play a role in childhood undernutrition, a pressing global health problem. Defining the incidence of this disorder has been hampered by the difficulty in directly sampling the small intestine mucosa and the microbiota. This study involved 110 young children exhibiting linear growth stunting who lived in an urban slum in Bangladesh, and who had not benefitted from nutritional intervention. The authors performed an endoscopy on 80 children who had biopsyconfirmed EED and for whom samples of plasma and duodenum were available. Of the bacterial strains obtained from the children, the absolute levels of a shared group of 14 taxa (not typically classified as enteropathogens) were negatively correlated with linear growth and positively correlated with duodenal proteins implicated in immuno-inflammatory responses. The representation of these 14 duodenal taxa in the faecal microbiota was significantly different from that of samples obtained from healthy children. Enteropathy of the small intestine developed in gnotobiotic mice that had been colonised with cultured duodenal strains obtained from children with EED. These results confirm the existence of a relationship between delayed growth and components of the microbiota of the small intestine and enteropathy, and provide a rationale for the development of therapies targeting these microbial contributions to EED.

The proportion of chronic undernourishment with growth stunting is 25 % in infants who have had more than 5 episodes of diarrhoea. These recurrent intestinal infections result in EED, a disorder characterised by villous atrophy combining a reduction in intestinal surface area and absorption capacities, alteration of the intestinal barrier and mucosal inflammation. More recent data suggest that microbiota dysbiosis of the upper gastrointestinal tract may be present in EED.

This study included 110 infants with a mean age of 18 months, from Dhaka, Bangladesh, who had chronic undernutrition with stunted growth, defined by nutritional intervention. Duodenal biopsies confirmed the presence of EED in 80 of them. The duodenal aspirate microbiota from 36 of these infants was analysed; a group of 14 bacterial taxa was present in over 80% of this population and were negatively correlated with the length/age ratio (r = – 0.049, p = 0.003) (Figure 1). The proteomics study of the duodenal biopsies showed a positive correlation between these 14 taxa and 10 proteins including 2 antimicrobial peptides, a marker of intestinal inflammation (LCN2), and a negative correlation with 10 proteins produced by the enterocytes (Figure 2).

In the 80 infants with demonstrated EED, the plasma proteomics study showed a strong positive correlation with REG3A and LCN2.

Comparison of the faecal microbiota of EED infants with 27 controls revealed a significant increase in Veillonella genus bacteria which were the most highly correlated with the duodenal proteins implicated in gastrointestinal inflammation.

After culture of 39 bacterial strains from duodenal aspirates of infants with environmental enteric dysfunction, including 11 of the 14 taxa, these were administered by oral gavage to mice that had been fed a diet similar to that of an 18-month-old Dhaka infant. Twenty-three of these bacteria were found to be present with a relative abundance > 0.1% in at least one part of the gut. Control mice received the caecal microbiota of conventionally raised mice by oral gavage. In contrast to the control mice, mice receiving “environmental enteric dysfunction” bacteria, exhibited infiltration of inflammatory mononuclear cells in the lamina propria of the small intestine in addition to epithelial abnormalities and architectural distortion with elongated crypts. These abnormalities had a patchy location in the small intestine but did not extend to the colon.

From a functional viewpoint, the results showed in these mice an increase in mRNA expression of anti-microbial peptides (Reg3b and Reg3g), an increase in a metalloproteinase (MMP8) and a reduction in mRNA encoding tight junction proteins. These alterations in the innate immune response and of the mucosal epithelial barrier may explain the systemic bacterial translocation to the spleen (Escherichia coli and Enteroccocus hirae). 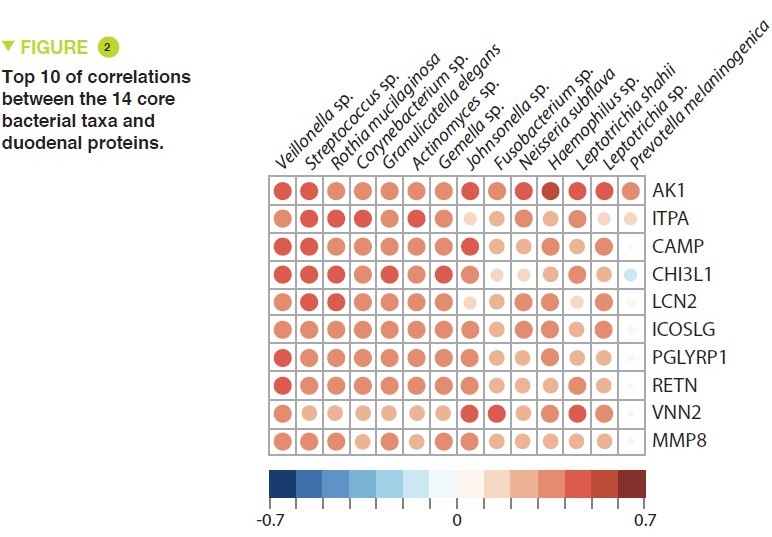 The results of this study suggest a causal relationship between the bacteria of the duodenum, environmental enteric dysfunction and chronic undernutrition with stunted growth. It is suggested that these children could therefore benefit from the development of treatments targeting this dysbiosis.

Could the metabolome be used to better diagnose C. difficile infections?

What to take away? Skin immunity

What to take away? Respiratory immunity

What to take away? Intestinal Immunity

Atopic dermatitis (AD) is a chronic inflammatory skin disease that appears in periodic flareups. Like asthm...