Many studies have reported abnormal gut microbiota in individuals with Autism Spectrum Disorders (ASD), suggesting a link between gut microbiome and autismlike behaviors. Modifying the gut microbiome is a potential route to improve gastrointestinal (GI) and behavioral symptoms in children with ASD, and fecal microbiota transplant could transform the dysbiotic gut microbiome toward a healthy one by delivering a large number of commensal microbes from a healthy donor. The authors had previously performed an open-label trial of Microbiota Transfer Therapy (MTT) that combined antibiotics, a bowel cleanse, a stomach acid suppressant, and fecal microbiota transplant, and observed significant improvements in GI symptoms, autism-related symptoms, and gut microbiota. Here, the authors report on a follow-up with the same 18 participants two years after treatment was completed. Notably, most improvements in GI symptoms were maintained, and autism-related symptoms improved even more after the end of treatment. Important changes in gut microbiota at the end of treatment remained at follow-up, including significant increases in bacterial diversity and relative abundances of Bifidobacteria and Prevotella. Their observations demonstrate the long-term safety and efficacy of MTT as a potential therapy to treat children with ASD who have GI problems, and warrant a double-blind, placebo-controlled trial in the future.

It is known that children with autism spectrum disorders suffer from a variety of gastrointestinal problems including constipation, diarrhea, and bloating. These children also have a dysbiotic gut microbiome characterized by an increased ratio of Firmicutes/ Bacteroidetes due to a low relative abundance of Bacteroidetes. This dysbiosis alters the gut-brain axis, promoting both the gastrointestinal problems and the characteristic autism-like behaviors. Microbiota transfer therapy consists of an initial gastrointestinal preparation with a 14 day course of vancomycin and a bowel cleanse on day 15, followed by fecal microbiota transplantation using a high initial dose of standardized human gut microbiota (by the oral or rectal route) and then a low maintenance dose for 7-8 weeks, concurrently with a proton pump inhibitor from day 12. Kang et al. previously reported that this treatment led to an 80% reduction in gastrointestinal symptoms and a smaller reduction in behavioral symptoms in children with ASD, in addition to a modification of the gut microbiota, at the 8-week follow-up.[2]

This article presents a follow-up evaluation of the 18 autistic children two years after the initial microbiota transfer therapy. Improvements in gastrointestinal symptoms, as assessed by the Gastrointestinal Symptom Rating Scale questionnaire, were maintained with a 58% reduction (Figure 1). Improvements were observed in all gastrointestinal symptoms (abdominal pain, indigestion, diarrhea, and constipation). Transit remained improved, with a 26% reduction in the percentage of days of abnormal stools. 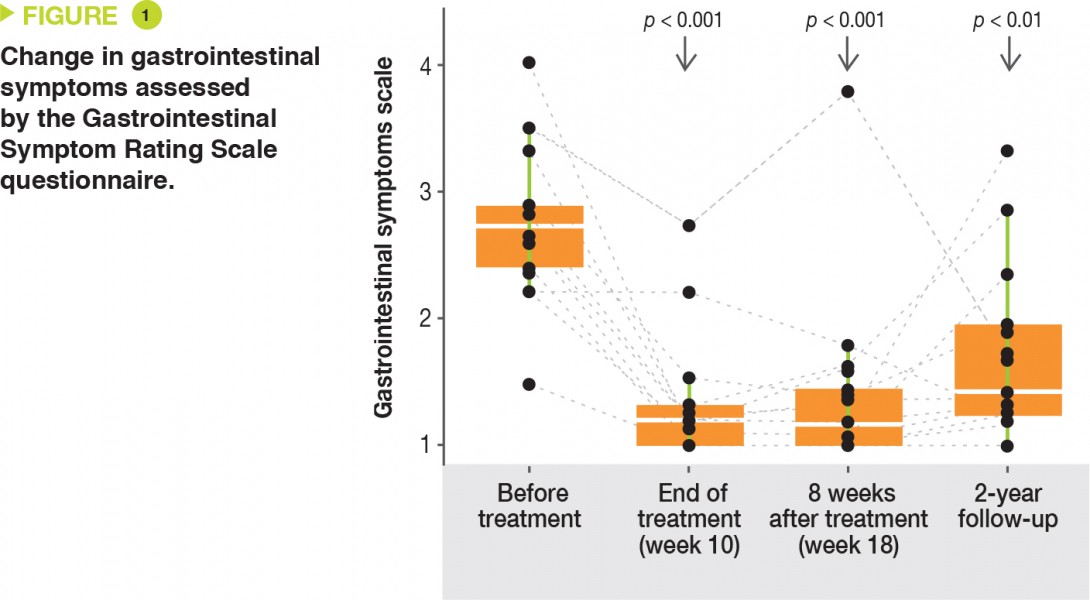 The families reported that autism-related signs steadily improved. ASD severity was 47% lower than baseline when assessed by the Childhood Autism Rating Scale (Figure 2). On the Aberrant Behavior Checklist the scores continued to improve and were 35% lower at two years compared to 24 % at the 8-week follow-up. The gut microbiota was analyzed by 16S RNA analysis for 16 of the 18 children. Bacterial diversity was higher at two years than after eight weeks of follow-up (Figure 3). A higher relative abundance of Bifidobacterium and Prevotella persisted at the 2-year follow-up, while Desulfobivrio abundance did not persist significantly.

These findings indicate that microbiota transfer therapy has a durable, long-term effect on the gut microbiota. In addition, it significantly and durably improves gastrointestinal and behavioral symptoms of autism spectrum disorders. It is now essential to carry out randomized, controlled, double-blind studies in children with ASD who do or do not have gastrointestinal problems. Indeed, dysbiosis may be present and impact the gut-brain axis even in the absence of gastrointestinal symptoms. The results of this study should be confirmed before this approach is used in clinical practice. 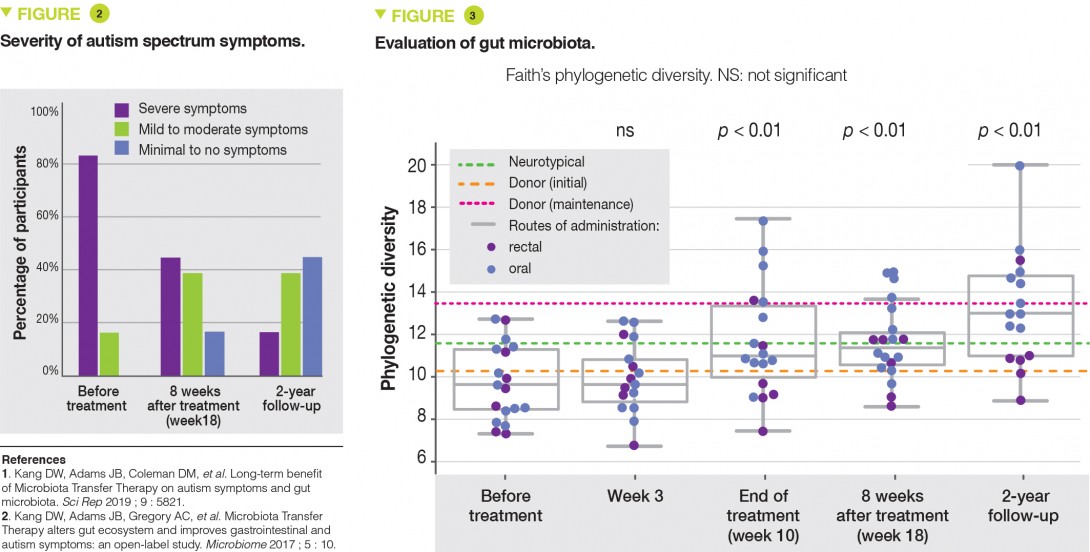 This study confirms the benefits of microbiota transfer therapy in children with autism spectrum disorders. The effects of the initial treatment were maintained at the 2-year follow-up on both the gut microbiota and on gastrointestinal symptoms, with even a continued improvement in autism-like behaviors.