The role of Fusobacterium in colorectal cancer

Comments on an original article by Bullman et al. (Science 2017)

Colorectal cancers (CRCs) comprise a complex mixture of malignant cells, nontransformed cells, and microorganisms. Fusobacterium nucleatum is one of the most prevalent bacterial species in CRC tissues.

Here, the authors show that colonisation of human CRC with Fusobacterium and its associated microbiome (including the Bacteroides, Selenomonas and Prevotella species) is maintained in distal metastases, demonstrating microbiome stability between paired primary and metastatic tumours. In situ hybridisation analysis revealed that Fusobacterium is mainly associated with cancer cells in metastatic lesions. In mouse xenografts of human primary colorectal adenocarcinomas, Fusobacterium and its associated microbiome remains viable despite successive passages. Treatment of CRC xenografted mice with metronidazole, an antibiotic, reduces Fusobacterium load, cancer cell proliferation, and overall tumour growth.

These observations should prompt further investigation of antimicrobial interventions as a potential treatment for patients with Fusobacterium-associated CRC [1].

Cancer-associated microbiota is known to influence cancer development and progression, including CRC. The microbiota of CRC patients is dysbiotic, and several studies conducted without any preconceptions have revealed an enrichment in F. nucleatum in tumour tissues and adenomas compared to non-cancerous colonic tissues [2]. These findings have been confirmed in studies conducted worldwide based on several cohorts of CRC patients. High levels of F. nucleatum have been associated with less T-cell tumour infiltration (T-cell infiltration is, however, a factor of good prognosis) [3], advanced disease, and a lower rate of patient survival. In addition, patients with F. nucleatum- associated CRC often presented with a right colonic location of cancer, BRAF mutation, and microsatellite instability. Studies based on various experimental models have suggested a protumourigenic role of Fusobacterium, which potentiates tumour growth in mouse models of CRC, xenografts derived from CRC cell lines, and in vitro CRC cell lines. The suggested mechanisms range from increased adhesion and invasion of tumour cells to modulation of the host immune response or activation of the Toll-like receptor 4 pathway. However, some animal or cellular studies have shown no carcinogenic effects of Fusobacterium [4]. 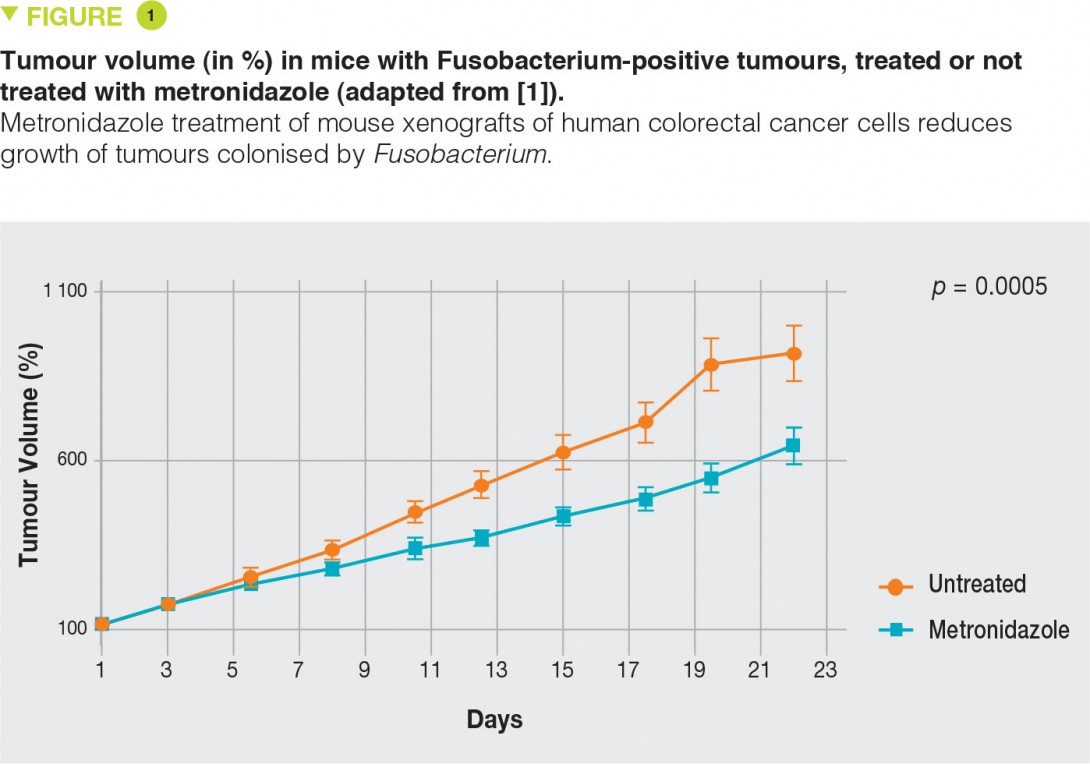 The treatment of metastatic CRC remains a major clinical issue. This study shows that some bacteria of the microbiota, especially those belonging to the Fusobacterium genus, continue to be viable in both the primary tumour and metastatic tissues in most patients, and play a role in CRC progression. The use of antimicrobial treatments targeting these bacteria is therefore a strategy to be considered, while trying to be as specific as possible, because other bacteria may play a protective role or be involved in the response to conventional anticancer therapies and immunotherapies [5].

Based on several independant cohorts, this study shows that Fusobacterium is present in a viable form in primary and metastatic tissues in the majority of CRC patients, and is suggested to play a role in promoting tumour progression. These observations should prompt further investigation of antimicrobial interventions as a potential treatment for patients with Fusobacterium-associated CRC.