Antibiotics are a powerful tool in the fight against bacterial infections. While treatments sometimes appear to be without obvious short-term side effects, the gut microbiota imbalance they provoke can cause diarrhea in up to 35% of patients.1-3 This antibiotic-associated diarrhea (AAD) can at times cloak serious intestinal infections.3

How do antibiotics unbalance the gut flora?

While antibiotics eradicate the (sidenote: Pathogen A pathogen is a microorganism that causes, or may cause, disease. Pirofski LA, Casadevall A. Q and A: What is a pathogen? A question that begs the point. BMC Biol. 2012 Jan 31;10:6. ) responsible for infection, they can also destroy some of the beneficial bacteria in your microbiota, systematically causing an imbalance of varying degrees in this ecosystem. This imbalance (known as (sidenote: Dysbiosis Generally defined as an alteration in the composition and function of the microbiota caused by a combination of environmental and individual-specific factors. Levy M, Kolodziejczyk AA, Thaiss CA, et al. Dysbiosis and the immune system. Nat Rev Immunol. 2017;17(4):219-232.   ) ) causes AAD, as the gut microbiota is less able to perform its protective functions. AAD can affect up to 35% of patients1-3 and up to 80% of children receiving antibiotic treatment.1

Furthermore, while the gut microbiota shows a certain degree of resilience (i.e. it reverts to a composition similar to that existing before the antibiotic-induced imbalance), it does not always fully recover.4,5 Recent research has shown that antibiotics can alter the diversity and abundance of bacteria, and that this imbalance can be prolonged (usually 8-12 weeks after the end of treatment).1,6 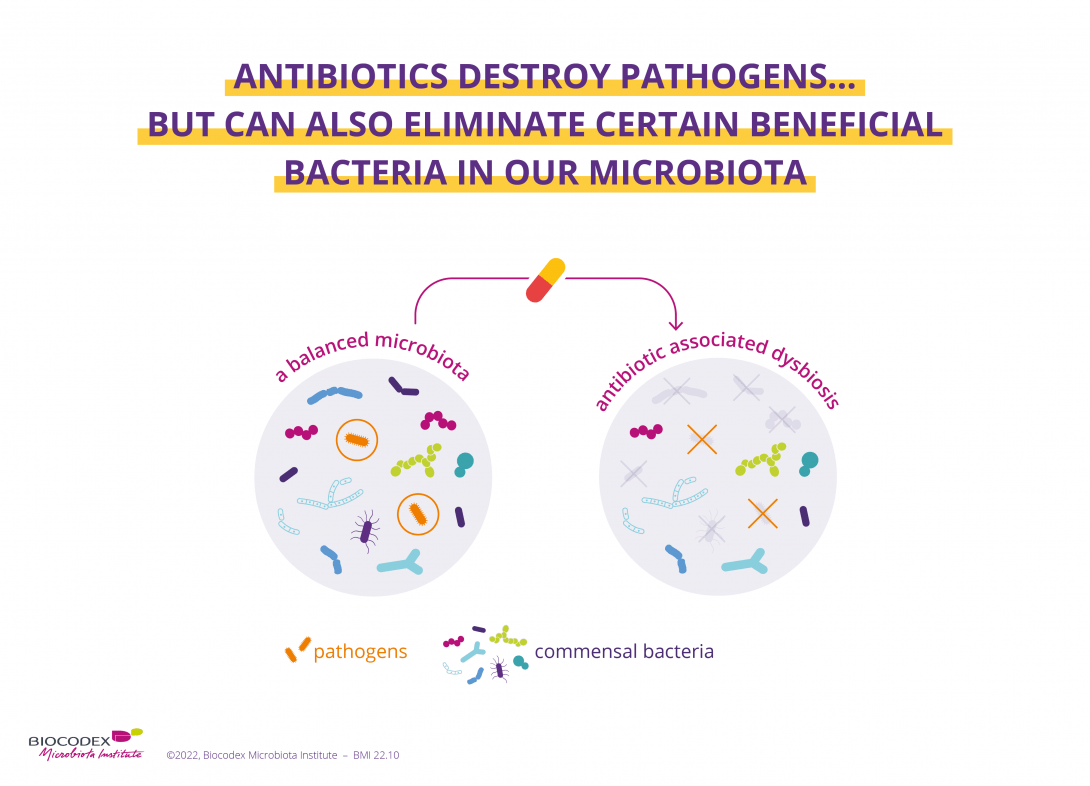 In most cases, diarrhea without further symptoms

The main short-term consequence of antibiotic treatment is the altered bowel movements experienced by some patients, most often resulting in diarrhea. AAD is defined as three or more very loose or liquid stools within 24 hours of the beginning of antibiotic treatment or up to 2 months after its cessation.7-9 Its incidence depends on several factors, including age, context and the type of antibiotic. The diarrhea is usually mild to moderate in intensity and in the vast majority of cases is functional, i.e. associated with a gut microbiota imbalance.1 Antibiotics with the broadest spectrum of antimicrobial activity (i.e. that act on a very wide range of bacteria) are associated with higher rates of diarrhea.3

However, in 10%-20% of cases the diarrhea results from an infection by Clostridioides difficile (C. difficile), a bacterium that can become pathogenic due to certain factors, such as antibiotic use, being older than 65 or being affected by certain associated conditions.3 The colonization of the gut microbiota by this bacterium triggers an inflammatory reaction, with clinical consequences ranging from moderate diarrhea to much more serious symptoms, including death.3

Is ending antibiotic use the most effective treatment?

The management of AAD depends on the symptoms and the pathogen (e.g. C. difficile).10 For mild to moderate diarrhea, treatment involves ending antibiotic use (or replacing the antibiotic with one less likely to cause diarrhea) to allow the microbiota to recover and the patient to rehydrate.10

Numerous studies have shown that probiotics may help reconstitute the gut microbiota, while some probiotics have proven effective in preventing and treating AAD.6,11,12 When taken during antibiotic treatment, other probiotics have been shown to reduce the risk of primary and secondary infection with C. difficile.13-15 Lastly, fecal microbiota transplantation (naturally transferring a healthy microbiota into a sick individual in order to restore his or her microbial ecosystem) is currently only used for the most serious infections, i.e. relapses of infections with C. difficile.16,17

This article is based on scientifically approved sources but is not a substitute for medical advice. If you or your child display symptoms, please consult your family doctor or pediatrician.

Antimicrobial resistance occurs when bacteria, viruses, parasites and fungi change over time and no longer respond to medicines. As a result of drug resistance, antibiotics and other antimicrobial medicines become ineffective and infections become increasingly difficult or impossible to treat, increasing the risk of disease spread, severe illness and death.

Held on 18-24 November, this campaign encourages the general public, healthcare professionals and decision-makers to use antibiotics, antivirals, antifungals and antiparasitics carefully, to prevent the further emergence of antimicrobial resistance.

Is there a microbial signature for our food allergies?

The first months of life are essential for the proper development of the immune system of newborns. This is...

Microbiota disruptions in the first years of life, when our intestinal flora and brain are developing, can ...

Metabolic syndrome represents a collection of metabolic problems associated with obesity, such as hypertrig...

Functional gastrointestinal disorders (FGDs), the most common intestinal afflictions, are a collection of c...

Schizophrenia and microbiota: has the link been confirmed?

More nature to strengthen the microbiota?