Our gut, often called our “second brain”, owns 200 million neurons (enteric nervous system), hosts several billion gut bacteria and tract is constantly sending information to our brain, and conversely. But this bidirectional communication can be disrupted when our gut microbiota is impaired and an inflammatory process takes hold. An impairment of the gut-brain axis could be involved in the onset of neuropsychiatric disorders1.

Research on the gut-brain axis is gradually revealing the processes used by gut bacteria to communicate with the brain. We now know that exchanges between brain and gut are based on 4 main pathways: neural, hormonal, immune, and metabolic. The two “organs” communicate through the vagus nerve which goes from the skull to the abdomen and plays a role in several vital functions such as heart rate. Patients who underwent a vagus nerve ablation are incidentally less likely to develop neurological disorders. 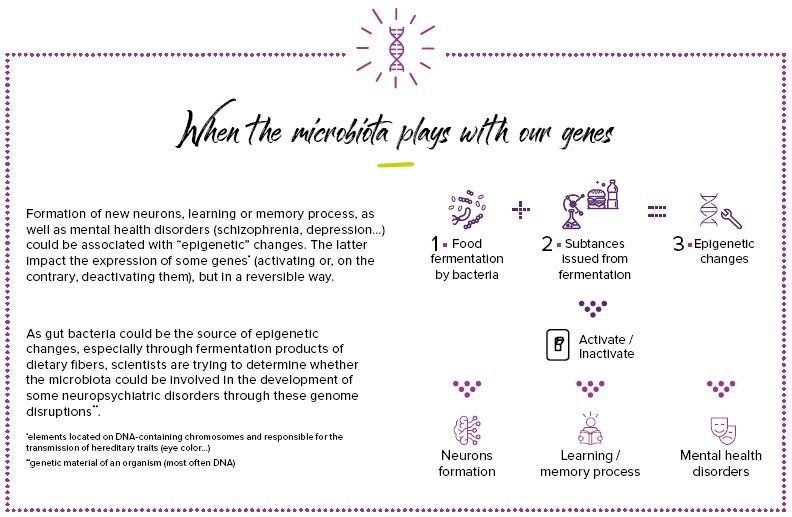 Gut-brain axis2: what is it?

Gut bacteria communicate with the brain by producing chemical molecules called “neurotransmitters” (serotonin, dopamine, GABA3…). These microbial molecules do not act directly on the brain, which is isolated and protected by a membrane called the blood-brain barrier. It appears that neurotransmitters produced by gut bacteria act on the cells lining the gastrointestinal wall in order to have them transmit their message to the central nervous system through the neurons of the gastrointestinal tract that are connected to the brain. Short chain fatty acids (SCFA) are biological substances, some of which have a beneficial and protective effect, produced by colon bacteria during the fermentation process of dietary fiber4. They play an important role in the communication between the two organs by acting directly on the brain.

Other possible pathways are the immune system and the blood flow. Thanks to SCFA, gut bacteria can stimulate some white cells, which are responsible for defending our organism. Those white cells then produce chemical messengers (cytokines) that can cross the intestinal wall, move into the bloodstream, and cross the blood-brain barrier. They then act on the brain, mainly on regions involved in the regulation of stress response. The brain acts on the intestines by modulating secretions, motility and blood flow, and as such, it affects gut permeability5

Is there a link between microbiota and brain functions?

All studies conducted on animals show that gut bacteria impact brain development, throughout life: creation of new neurons in the brain, development of new neural connections6, involvement in the transmission rate of electrical signals delivered by neurons, memory, social behavior, regulation of stress hormone (cortisol)… Without bacteria, our brain would be distressed and more vulnerable to infectious agents or toxic molecules7.

3 Gamma-aminobutyric acid, responsible for controlling fear and anxiety, among others