Microbiota disruptions in the first years of life, when our intestinal flora and brain are developing, can affect brain structures and functions and promote developmental disorders. Autism spectrum disorders (ASD) include a number of contrasted disorders8 associated to brain development defects. They could be related to a microbiota disruption induced by pregnancy and during the first few years of life: some gastrointestinal signs, frequently associated to this disorder, led scientists to believe that the microbiota was undoubtedly a way of understanding autism spectrum disorders.

Symptoms appear early in life and include communication deficit, social communication and behavior disorders as well as repetitive behaviors. Compared to the general population, affected people are more subject to gastrointestinal disorders (diarrhea, abdominal pain, constipation), whose severity seems sometimes related to that of the disease’s symptoms.

Autistic children seem to have a less diversified flora than other children: it has lower contents of bacteria known to be beneficial such as Bifidobacterium, and higher contents of others (Lactobacillus, Clostridium…). Moreover, autistic children intestines seem to host more Candida (especially Candida albicans) than usual. But this fungus produces ammoniac and toxins that can impact the brain’s functioning and exacerbate intestinal bacterial disorders.

In animals, a high-fat maternal diet during pregnancy could be associated to an imbalance of the gut microbiota–called “dysbiosis”–and the onset of autistic disorders in their offspring. Children born through C-section who received many antibiotics also seem to have a higher risk of developing these disorders. The upside is that breastfeeding during the first 6 months of life (minimum) could decrease the risk of developing these disorders at a later age.

A few avenues are under investigation: probiotics for instance, which could improve gastrointestinal disorders and relieve autistic symptoms, similarly to some antibiotics. Despite a significant infectious risk, fecal transplant10 could also be useful to reduce autistic behaviors and associated gastrointestinal disorders7 in children and adolescents. Finally, diet is of great interest. The use of omega-3 supplements could improve behavior: a diet free of gluten or milk proteins as well as a high-fat low-carb diet (called “ketogenic”) could increase sociability as well as the ability to communicate and decrease stereotyped behaviors. 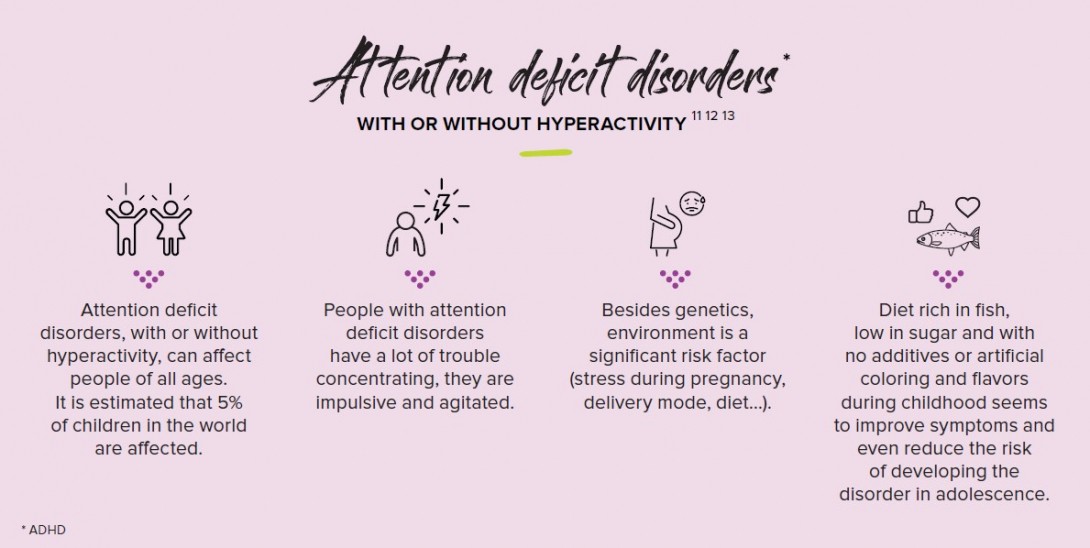 The gut microbiota
How our gut constantly talks to our brain
Chronic anxiety potentialy promoted by gut bacteria?
Focus

Pancreatic cancer: soon an early diagnosis via the fecal microbiota?

Is it normal that antibiotics give my child diarrhea?

What is your best advice for aging well?

What is putting me in such a good mood today?