They are characterized by swings between phases of depression and phases of overexcitement called “manic episodes”. The composition of patients’ gut microbiota is different from that of healthy individuals and its diversity is particularly reduced in affected women.

Bipolar patients (as well as schizophrenics) have increased levels of antibodies against fungi (Saccharomyces cerevisiae and Candida albicans) that are naturally present in the gastrointestinal tract. The presence of a specific protein in the blood indicates that bacteria usually located in the intestines were able to migrate. Moreover, concentrations of anti- Saccharomyces cerevisiae antibodies are higher in treatment-naive patients than in those who are treated with antipsychotics. These observations strengthen the hypothesis of a link between disease and inflammation26.

Is nutrition education an avenue to pursue?

Yes, without a doubt, according to some psychiatrists who rely on diet to reduce inflammation and restore gut microbiota balance27. Actually, a link between Western diet (high intake of carbohydrates and fat) and a disruption of neural and inflammation activity has been demonstrated. On the contrary, Mediterranean diet is the example to follow: it could have a protective effect against bipolar disorders as well as depression. The same could be said of omega-3 intake. 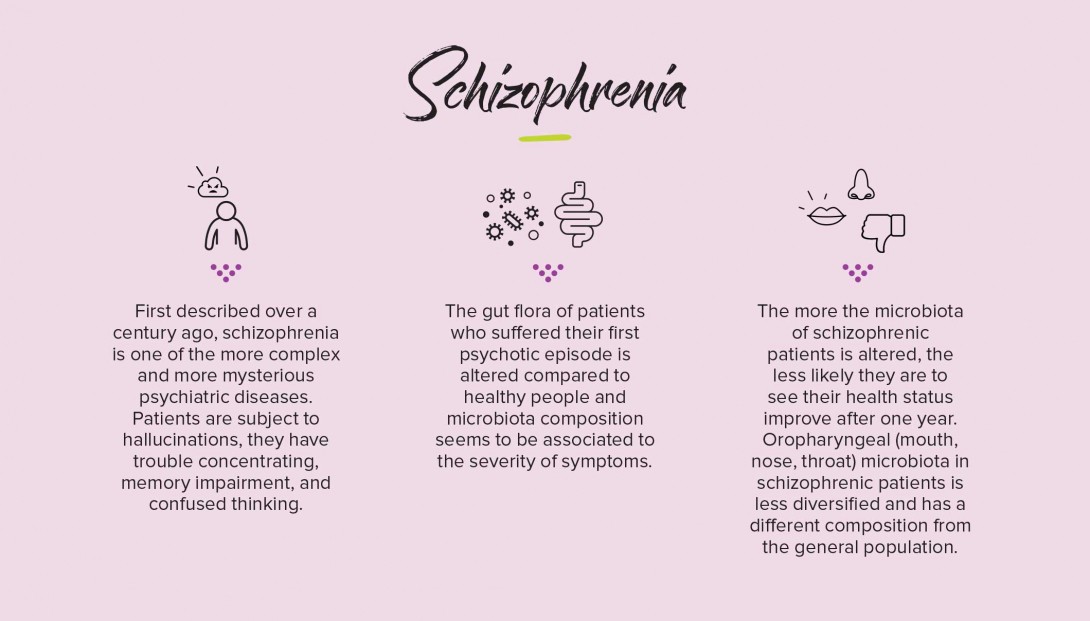 Pancreatic cancer: soon an early diagnosis via the fecal microbiota?

Is it normal that antibiotics give my child diarrhea?

Microbiota disruptions in the first years of life, when our intestinal flora and brain are developing, can ...

What is your best advice for aging well?

What is putting me in such a good mood today?