With an increasing prevalence that has made it the leading cause of death in many western countries, cancer is now regarded more as an emergent disease arising from environmental factors than a disease caused by constitutional genetic aberrations, which are now known to be much less common than previously thought. A paradigm shift favoured by the development of molecular biology techniques, a better understanding of the underlying mechanisms and the identification of associated biomarkers. For several decades, epidemiologists have observed a connection between cancer and diet, which has made the intestinal microbiota – and thus dysbioses – a focal point in the study of cancer. This connection has now found a mechanistic explanation involving energy metabolism, inflammation and immunity: influenced by diet, some bacteria can affect tumour progression, the response to cancer treatments and the side effects of these treatments.

The associations between certain cancers and dysbiosis, the mechanisms by which the intestinal microbiota can promote human cancers, and an inventory of diagnostic and/or therapeutic biomarkers, particularly in anticancer immunotherapy, are summarized in Table 1.

As in the case of obesity and diabetes, it is important to identify bacterial markers for diagnostic purposes but also to study bacterial functions in order to better understand the impact of the environment on these cancers.

In obese individuals, for example, an imbalanced diet in terms of quantity and quality can rapidly alter the intestinal microbiota and the functions of its constituent bacteria.[1] By characterizing the intestinal microbiota in these individuals, it can be possible to identify a specific dysbiosis and thus assess the probability of success or failure of a corrective diet. Many emergent diseases such as cancer have undergone similar developments and are benefiting from new avenues of pathophysiological research. 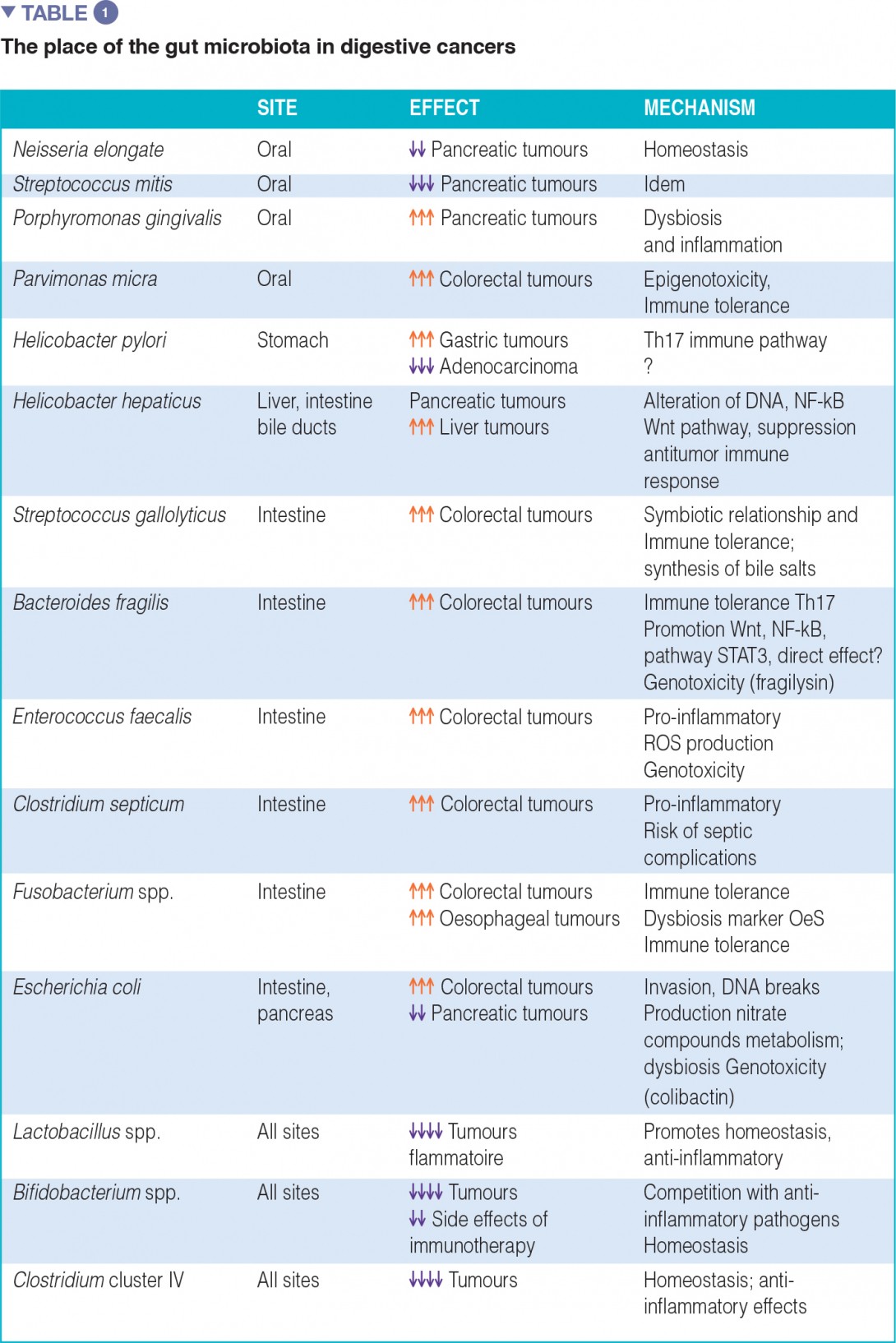 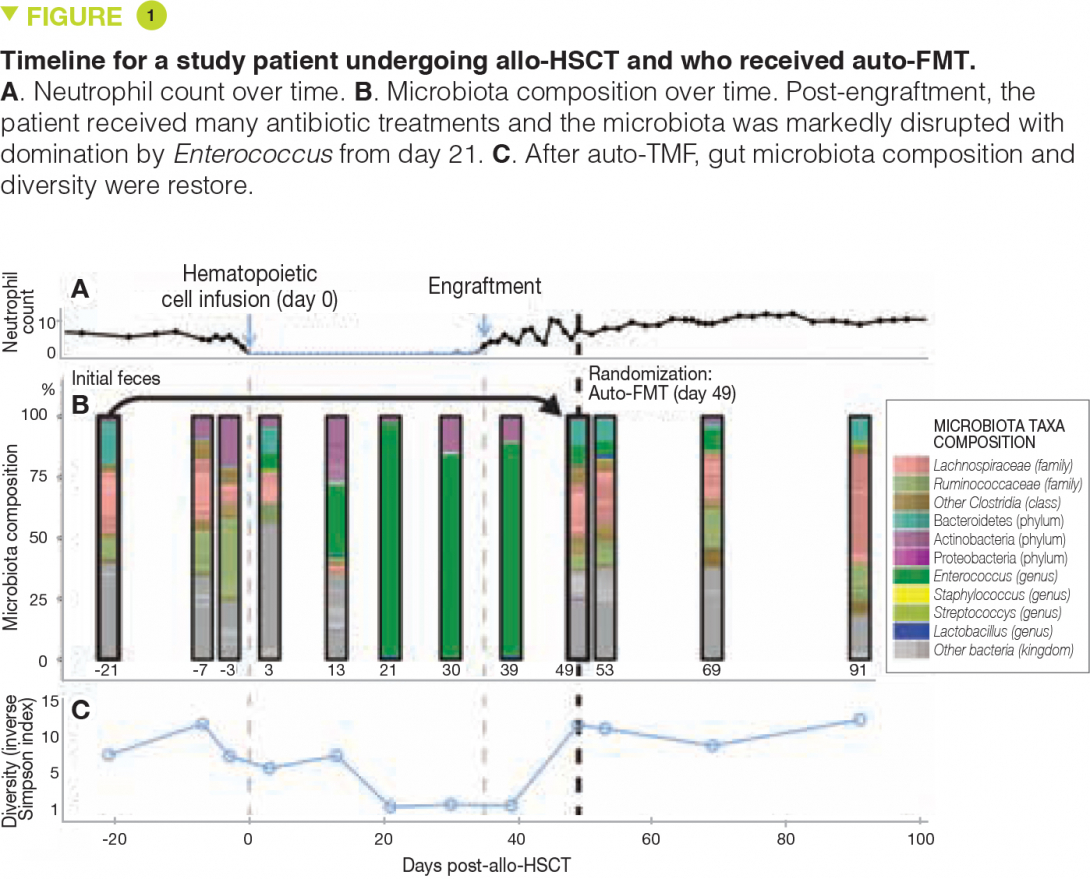 In physiological conditions, the oesophageal microbiota is similar to that of the oral cavity, with an abundance of Firmicutes, Bacteroidetes, Actinobacteria, Proteobacteria and Fusobacteria and predominance of the genus Streptococcus in the oesophagus. In gastroesophageal reflux disease (GERD) and Barrett’s oesophagus (BE), conditions which promote preneoplastic changes, the microbiota composition is closer to that of the stomach, with an abudance of Bacteroidetes, Proteobacteria and Fusobacterium. Paradoxically, Helicobacter pylori, a gastric bacterium known to be a cofactor in the development of gastric neoplasias (cancer and MALT lymphoma), appears to exert a protective role against oesophageal adenocarcinomas which are on the rise in western countries. In reality, different bacterial species in addition to H. pylori, such as Pasteurella stomatis, Dialister pneumosintes, Slakia exigua, Parvimonas micra and Streptococcus anginosus, are implicated in the development of gastric tumours. Recent work suggests that Enterobacteriaceae, especially Ruminococcus, might play an important role in the immune escape of gastric and oesophageal adenocarcinomas.[2]

Since the first descriptions of an association between colonic dysbiosis and CRC,[3, 4] the hypothesis that the oral flora participated in the dysbiosis implicated in CRC has been updated in light of original work on the link between oral-gut transmission and colon dysbiosis.[5] Disruption of the bacterial equilibrium often occurs at the expense of beneficial species like Bifidobacteria and Lactobacilli, which help maintain the immune response.[2] Since these bacteria can no longer provide a counterweight to pro-inflammatory bacteria, an asymptomatic chronic inflammation, long been known to promote oncogenic processes, develops in the colonic mucosa. Now, the current western diet (high in animal protein and sugars) is known to favour pro-inflammatory bacteria at the expense of anti-inflammatory bacteria. In contrast, a Mediterranean diet (rich in plant fibre) limits these damaging effects.[6] When fibre intake is insufficient, the bacteria recruited as a result of excessive consumption of animal protein and fat erode the mucosa, taken as a source of fibre, and expose the intestinal epithelium to potentially virulent bacteria (Figure 1). At the cellular level, the main biological signalling pathways such as the Wnt and the canonical NF-kB (nuclear factor-kappa B) pathway, respectively responsible for cell renewal and higher production of pro-inflammatory cytokines, are stimulated by this diet.[6] This phenomenon can be likened to a shift of the immune response toward tolerance, due to an overabundance of other bacterial populations such as Parvimonas micra and Streptococcus fragilis.[7] In animals, Bacteroides fragilis and Escherichia coli, which are present in overabundance in advanced CRC (TNM stage III or IV), maintain an inflammatory state in the colonic mucosa and promote tumour development.[8]

Primary liver tumours develop through a chronic process including cirrhosis, itself the result of hepatitis B or C virus infection. Epigenetic mechanisms resulting from the action of microorganisms lead to extinction of certain key genes such as p16 (INK4A), glutathione S-transferase P 1 (GSTP1), CDH1 (E-cadherin), Ras association domain containing protein 1 (RASSF1A), p21 (WAF1/CIP1), all of which are hypermethylated by HBV, as well as the Suppressor of Cytokine Signalling 1 (SOCS-1) and the STAT1 gene, hypermethylated by HCV. These genes delay the occurrence of cancer but hypermethylation inhibits their expression. Bacteria can intervene to promote these processes: Helicobacter hepaticus increases cancer risk, either directly by activating the Wnt and NK-kB pathways, or by facilitating the HVC-induced process. Just like environmental factors (viruses, chemical pollutants, etc.), certain enterobacteria such as E. coli, have been identified as cofactors for activation of the carcinogenic process. In metabolism, a disruption of Firmicutes/Bacteroidetes populations, a known risk factor for obesity, enhances the risk for HCC by crowding out protective species such as Lactobacillus, Bifidobacterium, Parabacteroides and Oscillibacter.[9, 10]

Patients with pancreatic cancer have a high density of Enterobacteriaceae, Pseudomonadaceae, Moraxellaceae and Enterococcaceae in tumour tissue, while Acinetobacter, Aquabacterium, Oceanobacillus, Rahnella, Massilia, Delftia, Deinococcus, and Sphingobium are abundant in the duodenal lumen. As in CRC, the dysbiosis linked to this cancer also includes changes in the oral flora, characterized by an overabundance of Porphyromonas gingivalis and an underabundance of Neisseria elongate or Streptococcus mitis. One more example of the link between intestinal dysbiosis and gastrointestinal cancers. As far as treatment is concerned, it is important to note that Gammaproteobacteria can increase resistance to gemcitabine, the standard of care for pancreatic cancer.

Axenic (germ-free) animals develop fewer tumours, probably due to immune tolerance and less reactive inflammatory activity, which could be explained by the absence of a physiological microbiota. The microbiota can contribute to cancer development through different mechanisms: first of all, activation of inflammation by dysbiosis and reorientation of the immune system; production of genotoxins (colibactin, fragilysin) and virulence factors by bacteria able to directly alter host DNA; induction of oxidative stress by production of reactive oxygen species (ROS); and finally, by bacterial production of secondary metabolites (secondary bile acids, etc.). In the colon model, for example, there are four distinct subtypes corresponding to different metabolic, immune or inflammatory pathways.[11] In the CRC subtype with T lymphocyte infiltration, the T cells have a reduced ability to express cytokines or attack target cells due to persistent stimulation by tumour antigens. This phenomenon is known as T cell exhaustion. It is the most common mechanism of immune escape. Regardless of the initial recruitment of lymphocytes – cytotoxic or facilitator – the tumour continues to grow.[9] Regulatory T cells (Tregs) will facilitate the immunosuppressive effect by producing factors such as TGF-β. Tregs are preferentially recruited in the exhaustion phase. Furthermore, the intratumoral density of Tregs is a negative prognostic marker. By producing immunosuppressive cytokines (IL-10 and TGF-β), Tregs interfere with the specific action of cytotoxic T cells which normally target the tumour. In particular, Tregs increase the immune down-regulating protein CTLA-4 or CD152 (cytotoxic T-lymphocyte-associated protein 4) of these T cells. This protein has become a target of modern immunotherapies. Tregs act with the help of Th17 cells and STAT3 (Signal Transducer and Activator of Transcription 3), involved in the process of carcinogenesis in various organs. Th17 cells produce pro-inflammatory cytokines (IL-17 and IL-23) which promote tumour growth by increasing the production of Th1 cytokines and that of a chemokine (C-X-C motif) ligand 9 and 10 (CXCL9 and CXCL10). Th17 cells have similar characteristics to stem cells and can self-renew. The cytokine environment at the site of the tumour affects the different models of Th17 cell expression: in colorectal, hepatocellular and pancreatic cancer, tumour infiltration by Th17 cells is an unfavorable prognostic marker because it promotes immune tolerance to the tumour. The dysbiosis in the mucosal lining modulates the expression of IL17, IL-23, STAT3.

The intestinal microbiota has been shown to modulate the response to anticancer chemotherapy and immunotherapy in mouse models and in humans. Lung and kidney cancers and melanoma have been studied in clinical trials. This effect is never attributable to a single species: it is always a reflection of the impact of the intestinal microbial community as a whole on immunity or a function shared by different bacterial species. These bacterial communities influence the response to therapy in terms of side effects/toxicity and resistance to treatment (Figure 2). For example, proteobacteria, particularly Mycoplasma hyorhinis, possess cytidine-deaminase activity which metabolizes gemcitabine and thereby reduces its efficacy. Likewise, cyclophosphamide has variable antitumor effects according to dose; its efficacy is modulated by gram-positive (including Enterococcus hirae) and gram-negative species (including Barnesiella intestinihominis).[12]

Anticancer immunotherapies have been successfully used in malignant melanoma. These are the most promising therapies involving immune checkpoint inhibitors targeting PD-1 and CTLA-4. It was first noted that in metastatic renal or lung cancer patients, the use of antibiotics could modulate the activity of anti-PD-1 or anti-PD-L1 immunotherapies.[13] Subsequently, a large American study in metastatic melanoma treated with immunotherapy found that a good response to treatment (longer progression- free survival and overall survival) depended on the colonic microbial composition: faecal microbiota transplantation from the patients to recipient mice showed that intestinal dysbiosis was indeed the root cause of the variability in response to anti-PD-1 immunotherapy.[14, 15]

These data are to be compared with data on TLR4 polymorphisms that are related to the variable response to immunotherapy. TLR (toll-like receptors) are transmembrane or cytosolic receptors which belong to the large family of receptors of the innate immune system (PRR, pattern recognition receptors), expressed by epithelial cells and immune cells in the intestine. Binding of a TLR with a microbial ligand triggers an intracellular signalling cascade which usually leads to an inflammatory response through activation of NF-kB. Host immune status has proved to be the main factor in the response to all antineoplastic treatments, directly and by alterations of the intestinal microbiota. It should also be noted that other therapeutic techniques such as radiotherapy and surgery are also affected by the microbiota: ionizing radiation is less toxic to axenic mice compared to conventional mice; postoperative healing of patients after colon cancer surgery depends on the type of dysbiosis.

The colonic microbial composition is influenced by environmental factors and can affect the development and progression of malignant tumours through metabolic, inflammatory and immune pathways. Studies are under way to better understand resistance to and toxicity of anticancer treatments. It is likely that modulation of the intestinal microbiota will become a way to optimize anticancer therapy in the future.