Antibiotic treatment can deplete the commensal bacteria of a patient’s gut microbiota and, paradoxically, increase their risk of subsequent infections. In allogeneic hematopoietic stem cell transplantation (allo-HSCT), antibiotic administration is essential for optimal clinical outcomes but significantly disrupts intestinal microbiota diversity, leading to loss of many beneficial microbes. Although gut microbiota diversity loss during allo-HSCT is associated with increased mortality, approaches to re-establish depleted commensal bacteria have yet to be developed. A randomized, controlled clinical trial has been initiated to compare autologous faecal microbiota transplantation (auto-FMT) versus no intervention; the intestinal microbiota profiles of 25 allo-HSCT patients (14 who received auto-FMT treatment and 11 control patients who did not) were analysed. Changes in gut microbiota diversity and composition revealed that the auto-FMT intervention boosted microbial diversity and re-established the intestinal microbiota composition that the patient had before antibiotic treatment and allo-HSCT. These results demonstrate the potential utility of faecal sample banking for auto-FMT for posttreatment remediation of a patient’s gut microbiota after microbiota-depleting antibiotic treatment during allo-HSCT.[1]

What do we know about this subject?

Antibiotic treatment damages the intestinal microbiota and increases the risk of gastrointestinal infection. Although this effect has been recognized for more than 60 years, remediation of the antibiotic-depleted gut microbiota has yet to become standard clinical practice. In patients undergoing allogeneic hematopoietic stem cell transplantation (allo-HSCT), antibiotics are routinely given to treat or reduce the risk of serious infection. Prospective studies of allo-HSCT patients demonstrated that the intestinal microbiota is markedly altered during treatment, with profound loss of obligate anaerobic bacteria including immunomodulatory species such as those belonging to the Clostridia class and Bacteroidetes phylum [2]. The clinical consequences of these alterations are also apparent in allo-HSCT: disruption of beneficial obligate anaerobes correlates with complications that include systemic infection with vancomycin-resistant Enterococcus (VRE), Clostridium difficile infection, and graft-versushost disease (GVHD).[2, 3] Overall, patients who lose gut microbiota diversity at the time of hematopoietic stem cell engraftment have higher rates of transplant-related death.[4]

Allo-HSCT patients remain immunocompromised for many months after engraftment, and although immunocompromised patients, including allo-HSCT recipients, have undergone heterologous FMT without side effects,[5] the authors reasoned that autologous FMT would be safer by minimizing the risk of exposure to potentially pathogenic microorganisms not previously encountered by the patient. The authors initiated a randomized, controlled clinical trial to determine the feasibility of auto-FMT for restoring the gut microbiota and for decreasing complications related to allo-HSCT. Here, they present an analysis of the gut microbiota compositional changes in 25 patients enrolled and randomized from whom faecal samples were longitudinally collected.

The authors first confirmed in their cohort of 753 patients (3,237 longitudinally collected faecal samples) that allo-HSCT and the different associated antibiotic treatments induced a marked decrease in gut microbiota diversity, reaching a nadir 5 days after allo-HSCT, which persisted for at least 6 weeks and which in most patients had not recovered at day 100 post-allo-HSCT. 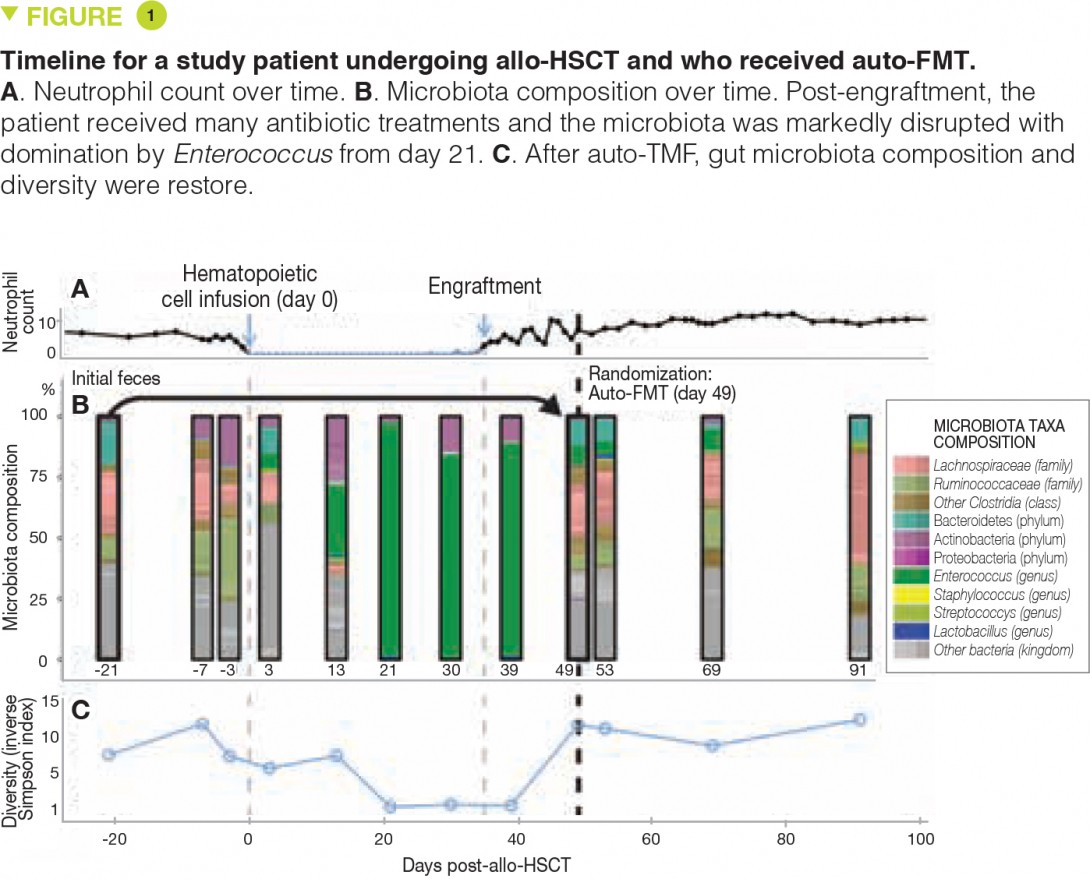 As part of the randomized study, faecal samples from patients collected before allo-HSCT were frozen at -80°C and stored. One to 5 weeks (mean, 13 days) after allo- HSCT, upon engraftment (defined by recovery of the neutrophil count to > 500/mm3), patients were re-evaluated and another faecal sample was taken. If there was a paucity of bacteria from the Bacteroidetes phylum, patients were randomized. The results of microbiota analyses from the first 25 evaluable patients (14 from the auto-FMT group and 11 from the control group) are presented. Auto-FMT was administered as a single retention enema after colonic preparation with polyethylene glycol, similar to the preparation for a colonoscopy. The authors show that auto-FMT not only restores the diversity of the intestinal microbiota but also its composition pre-allo-HSCT.

microbiota and disruptions thereof play a role in the common infectious and non-infectious complications encountered during allo-HSCT. This first study shows that the collection and storage of a patient’s faecal samples prior to allo-HSCT to be re-administered after engraftment is a feasible and effective strategy to reconstitute the microbiota. It remains to be seen whether patients who underwent auto-FMT have better outcomes with regard to these complications and if they have a better overall survival. If the efficacy of this strategy is confirmed, it could also be considered in other situations where significant microbiota disruption is expected, such as broad spectrum or prolonged antibiotic treatment or anticancer chemotherapy.

Although the benefits in terms of haematological outcomes and overall survival still need to be evaluated, auto-FMT is a promising strategy to re-establish the intestinal microbiota after the disorders induced by the antibiotic treatment associated to the allo-HSCT.