Commentary on the original publication by Svolos et al. (Gastroenterology 2019)

The effects of a personalized diet (CD-TREAT), based on the composition of EEN, were evaluated by analysing the intestinal microbiota, inflammation and clinical response in rats, in healthy adults, and in children with relapsing CD.

Ultimately, it was shown that CD-TREAT replicates EEN changes in the gut microbiota, decreases gut inflammation, is well tolerated and is potentially effective in patients with active CD.[1]

What do we know about this subject?

Exclusive enteral nutrition (EEN) is an effective treatment of Crohn’s disease with ileus involvement, achieving good results (mucosal healing in 80% of cases) that are superior to those obtained with corticotherapy. However, the main obstacle is the acceptability of receiving, for at least 8 weeks, exclusive enteral nutrition. EEN is delivered by nasogastric tube or, as for Modulen IBD®, by the oral route. The mechanism of action of EEN is not fully understood but several studies suggest that it acts by modulating the intestinal microbiota.

This study aimed to determine whether an ordinary diet (CD-TREAT), i.e. oral intake of ordinary foods but based on a nutrient composition similar to that of Modulen IBD®, could be effective in Crohn’s disease. The proportion of carbohydrate was decreased and that of protein increased. A multivitamin tablet provided the micronutrients from EEN. A crossover study was conducted in 25 healthy adult volunteers who received CD-TREAT or EEN for one week each, with a washout period in between. CD-TREAT was easier to follow and more satiating than EEN. Microbiota richness and alpha diversity were not altered by these diets. However, the relative abundance of 58 (49.3%) and 38 (32.3%) bacterial genera changed significantly after EEN and CD-TREAT, respectively, of which 28 changed in the same direction. There were changes in the concentrations of different metabolites (some short chain fatty acids – acetate, propionate and butyrate significantly decreased after EEN and CD-TREAT) and faecal pH increased by about 1 unit.

5 groups of rats, HLA B27 (inflammatory) and B7 (non-inflammatory): B27-EEN, B27-CD-TREAT, B27-CONTROL, B7-EEN and B7-CONTROL. EEN and CD-TREAT decreased ileal inflammation (Figure 1A), with lower expression of IL-6 in the B27- CD-TREAT group compared to the B27- CONTROL group (p = 0.036). After the 4-week intervention, bacterial diversity was higher in cecum (Figure 1B) and in feces in the B27-CD-TREAT and B27-EEN groups versus B27-CONTROL. Both diets caused changes in faecal concentrations of some short chain fatty acids. 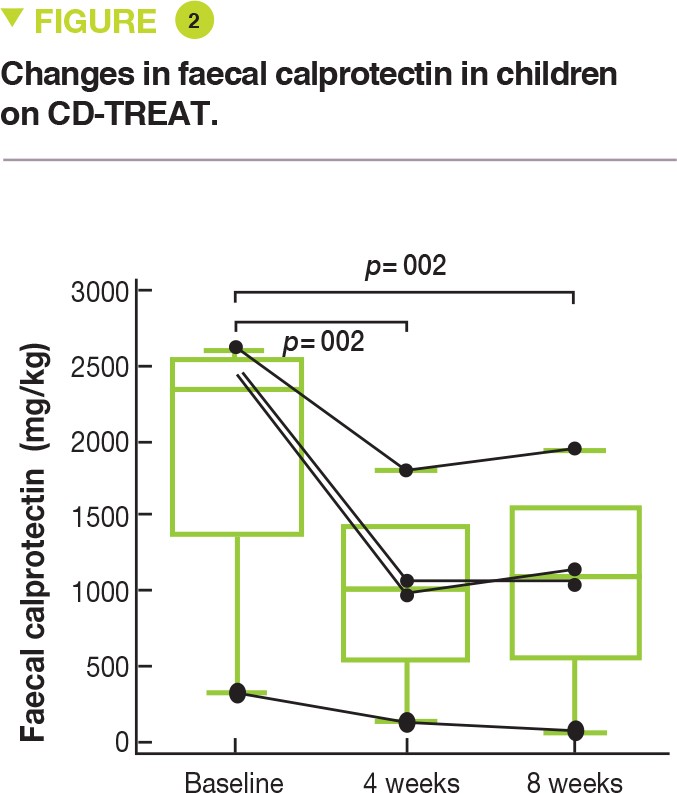 This study shows that this diet is more feasible when given orally and that it mimics the effects of EEN with Modulen IBD® on the gut microbiota. CD-TREAT also improves clinical signs and reduces gut inflammation.

This study provides proof-ofconcept that a novel and better tolerated dietary treatment could be effective in Crohn’s disease. These findings need to be confirmed in large, controlled, randomized clinical trials.