Developmental disorders in children appear to be related to maternal obesity. However, the underlying mechanisms and possible actions remain unclear. This cross-sectional study in 778 Chinese children aged 7 to 14 years indicates that maternal obesity is strongly correlated with lower cognition and socialisation in the children. Moreover, it has been demonstrated in mice that maternal obesity disrupted both behaviour and gut microbiota in the offspring. These two phenomena were restored by a high-fibre diet in either the dams or the pups, by reducing synaptic impairments and microglial maturation defects. Faecal microbiota transplantation (FMT) experiments revealed a causal relationship between the microbiota and behavioural changes. Moreover, treatment with the microbiota-derived short-chain fatty acids also alleviated the behavioural deficits in the offspring of obese mice. This study indicates that the microbiotametabolites- brain axis may underlie maternal obesity-induced cognitive and social dysfunction and that high dietary fibre intake could be a promising intervention.

Obesity is increasingly frequent in women of child-bearing age, which leads to a higher risk of diabetes, hypertension, and behavioural changes in the offspring. Nationwide studies have shown that these children had a greater risk of having lower intellectual capacities and autism spectrum disorders. This intellectual deficit was reproduced in mice when the mothers were fed a maternal high-fat diet (mHFD). The gut microbiota is affected by the diet and by maternal obesity. Moreover, data exist which have identified a link between the gut microbiota and brain function. A high-fibre diet enhances the production of short-chain fatty acids (SCFA) which may be the metabolites involved in this gut-brain axis.

In mice, when the mothers received a mHFD for 12 weeks, memory and social interactions in the offspring were impaired compared with those of mothers fed a control diet (mCD) (p < 0.01). The use of 4 types of diet in the mothers, mCD, mHFD, mFFD (high-fat and high- fibre) and mFD (high-fibre), for 12 weeks, showed that a high-fibre diet in the mother (mFFD and mFD) corrected these memory and social interaction deficits in the offspring (p < 0.01). This was associated with an elevated post-synaptic density in the hippocampus of mFFD offspring compared with mHFD offspring (p < 0.05), and with differences in gene expression in the microglia in the hippocampus and the prefrontal cortex.

This effect of a high-fibre diet is associated with a modification in the composition of the gut microbiota as shown by 16S sequencing analysis. Analysis of OTU (operational taxonomic units) data revealed 21 bacterial taxa which differed between the mHFD and mFFD groups, 9 of which belonged to the S24-7 family, with an increase in the group receiving the mFFD diet (Figure 1); the abundance of 5 OTUs was positively correlated with cognitive and social behavioural deficit (p < 0.05). The high-fibre diet corrected the fall in propionate and acetate in the stools of the offspring, but butyrate was unaffected (p < 0.01).

The addition of fibre to the diet of the offspring of mHFD mice corrected the behavioural and social deficits. These mHFD-oFD pups (o = offspring fed a highfibre diet (FD)) also exhibited an increase in S24-7 levels. Specifically, mHFD-oCD stool samples were rich in Bacteroides and poor in Ruminococcus, and for those of mHF-oFD the reverse was true (Figure 3). This was also associated with differences in cognitive and social behaviours. As in the mothers, fibre supplementation in the diet of the offspring produced an increase in SCFA levels. Dietary supplementation with a mixture of acetate and propionate in the drinking water improved cognitive and social abilities, and also the composition of the hippocampus and the prefrontal cortex. 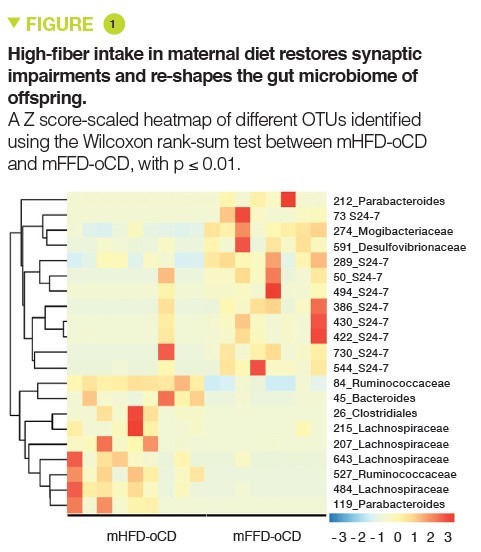 Modification to the diet of obese mothers or their children by fibre supplements, or even the correction of their dysbiotic microbiota, opens new perspectives for the improvement in cognitive and social capacities of these children. 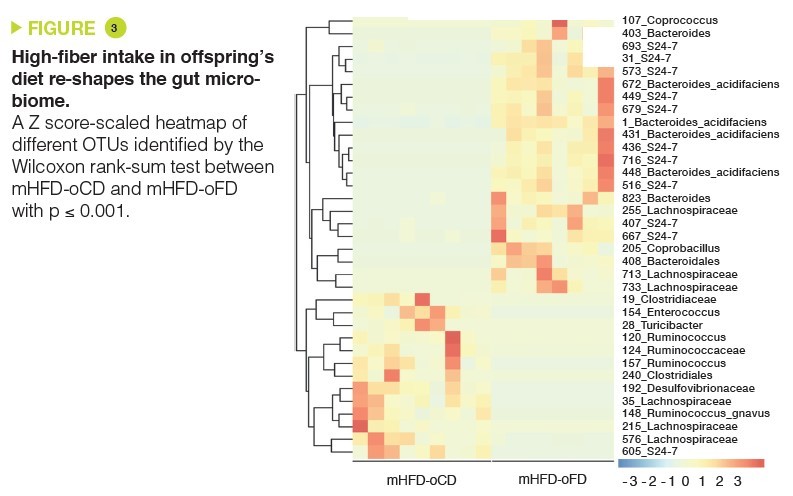 The cognitive and social deficits of children born to obese mothers are induced by changes in the gut microbiota transmitted from the mother to the child. These abnormalities are corrected by dietary supplementation with fibre, in the mother or the child. This effect is mediated by shortchain fatty acids, acetate and propionate.

Discovery of a new link between autism and gut microbiota