Anti-programmed cell death protein 1 (PD-1) immunotherapy offers long term clinical benefits to patients with advanced melanoma even though some patients are resistant to these treatments. The composition of the intestinal microbiota correlates with the efficacy of this therapy in preclinical models and in cancer patients. With the aim of determining if the anti-PD-1 resistance could be overcome by modifying the intestinal microbiota, this clinical trial evaluated the safety and efficacy of anti-PD-1 responder-derived faecal microbiota transplantation (FMT) in patients with PD-1-refractory melanoma. This combination was well tolerated, produced a clinical benefit in 6 of the 15 patients evaluated and induced a rapid and durable microbiota perturbation. Responders exhibited increased abundance of taxa that were previously shown to be associated with response to anti-PD-1, such as Faecalibacterium prausnitzii and Akkermansia muciniphila, increased CD8+ T cell activation and decreased frequency of interleukin-8-expressing myeloid cells. Responders had distinct proteomic and metabolomic signatures, and transkingdom network analyses confirmed that the gut microbiome regulated these changes. Collectively, these results show that FMT associated with anti-PD-1 changed the gut microbiome and reprogrammed the tumour microenvironment to overcome resistance to anti-PD-1 in a sub-set of melanoma.

Immune-checkpoint blockade with monoclonal antibodies targeting programmed cell death protein 1 (PD-1), results in long term clinical benefits in nearly 40% of patients with advanced melanoma [2]. In addition to the intrinsic tumour mechanisms underlying resistance to anti-PD-1 agents, the gut microbiome is a major extrinsic tumour regulator of responses to anti-PD-1 agents [3]. In mice, the composition of the gut microbiome modulates the therapeutic activity of the anti-PD-1 and antibodies directed against its ligand (PD-L1). Moreover the administration of certain commensal intestinal bacteria or the transplantation of faecal microbiota (FMT) enhances the efficacy of anti-PD-1 agents in mice with melanoma [4]. Although several studies have reported that a favourable gut microbiome was associated with a response to anti-PD-1 in cancer patients, its precise composition is not yet fully understood. Specifically, in melanoma, key bacterial species belonging to various phyla, in particular the Actinobacteria (Bifidobacteriaceae spp. and Coriobacteriaceae spp.) and the Firmicutes (F. prausnitzii), are associated with a favourable response to anti-PD-1 agents with limited concordance between the species identified in various studies. The question of whether microbiota transfer therapy can overcome anti-PD-1 resistance in patients with advanced melanoma has not been studied. To respond to this question, the authors designed an open label single-arm clinical study to evaluate the safety and efficacy of FMT derived from melanoma patients showing long-term response to anti-PD-1 agents (R), in patients with metastatic melanoma refractory to anti-PD-1. 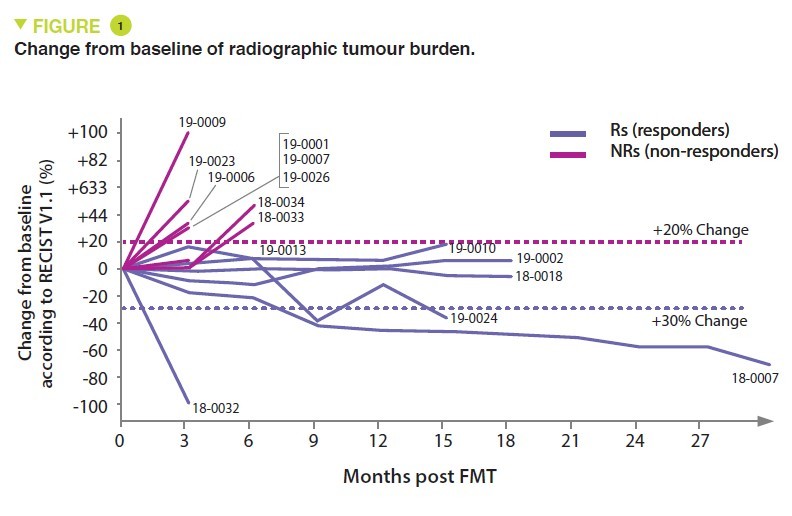 Sixteen patients with melanoma primo-refractory to anti-PD-1 treatment were included between June 2018 and January 2020. Seven donors, of whom four exhibited complete response (CR) and three, partial response (PR), with a median progression-free survival (PFS) of 56 months (range: 45 to 70 months) were used to treat the 16 patients. One FMT obtained from a single donor was administered to each patient with pembrolizumab, followed by additional pembrolizumab every 3 weeks until progression of the disease or unbearable toxicity. Radiographic evaluations were performed every 12 weeks and the response was classified according to RECIST v1.1 criteria (Figure 1). The intestinal microbiota of the recipients (collected before FMT and then each week for 12 weeks, and then at 3-week intervals) and the donors was analysed using shotgun sequencing. Patients were followed up for an average of 12 months. One patient was not assessable and the results therefore concerned 15 patients.

No serious side effect was attributed to the FMT. Objective responses were observed in 3 patients and stabilisation lasting > 12 months was observed in 3 additional patients.

Immunological analysis showed that the response to FMT was associated with CD8+ T-cell activation. The levels of several circulating cytokines and chemokines decreased after FMT in Rs, including MCP1, IL-8 and IL-18 (associated with anti-PD-1 resistance), and IL-12p70 and IFN-γ (associated with a T-cell antitumour response).

Lastly, transkingdom network analysis showed that the abundance of commensals which increased in Rs patients (F. prausnitzii and A. muciniphila) correlated with the favourable laboratory parameters, such as a fall in IL-8 levels.

This study suggests that FMT could overcome resistance to anti-PD-1 in a sub-set of patients with refractory melanoma. Although these results remain preliminary, they confirm the results of a previous study, published recently [5] and encourage the conduct of controlled studies on a larger scale.

This single arm, open label study, suggests that FMT may overcome anti-PD-1 resistance in a sub-set of patients with refractory melanoma. If the results are confirmed in controlled studies conducted on a larger scale, modulation of the microbiota concomitant with immunotherapy is a combination which may revolutionise cancer therapy.

Commented article
What is the impact of Covid-19 on the human microbiome?
High-fibre diet mitigates maternal obesity-induced cognitive and social dysfunction in the offspring via gut-brain axis
Focus