Obesity is one of the greatest public health challenges of the 21st century because of its high prevalence and its role in the development of multiple non-communicable diseases (metabolic syndrome -MetS- and type 2 diabetes mellitus -T2DM). Evidence of the role of gut microbiota alterations, partly due to unhealthy diets, in the mechanisms linking obesity to inflammation and metabolic dysfunction opens new opportunities for a better understanding of the disease aetiology and for designing management strategies. The investigated paths for disease management include faecal microbiota transplants (FMT), dietary ingredients intended to nourish our beneficial microorganisms (like prebiotic fibres) and indigenous bacteria (known as probiotics) to replenish our gut with missing beneficial microorganisms. Evidence is promising but work is still needed to identify constellations of effector intestinal bacteria that help in reprograming and preventing obesity, and to personalize diets to optimize metabolic functions of our gut microbes.

We are witnesses of an obesity epidemic worldwide that no country has yet been able to reverse. The overall obesity prevalence has tripled in the US and many EU countries since the 1980s, becoming one of the greatest public health challenges of the 21st century. In fact, obesity shows high comorbidity rates, constituting a major risk factor for the development of multiple non-communicable diseases. Obesity-induced insulin resistance is considered a key causal factor of MetS, which often progress to pancreatic β cell failure that finally triggers T2DM onset.[1]

Metabolic inflammation: the path from obesity to chronic comorbidities

Currently, it is well-documented that the chronic inflammatory state associated with obesity and causally linked to metabolic complications affects the adipose tissue and other organs, including the brain, muscle, liver, pancreas and gut, which show different particularities.[1, 2] Specifically, the involvement of the intestinal immune system and the microbes that expand under the exposure to unhealthy diets have recently emerged as additional drivers of obesity-associated metabolic inflammation and could also represent therapeutic targets.[2, 3] 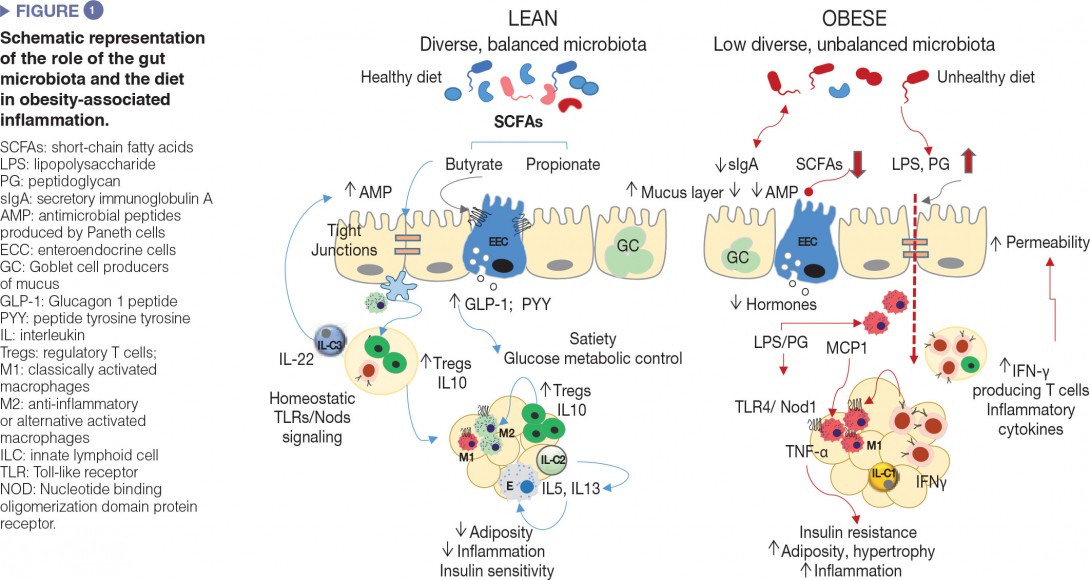 How is the intestinal microbiota involved?

The involvement of the gut microbiota in obesity has been partly inferred from observational studies reporting dysbiosis in obese subjects compared to lean ones in cross-sectional assessments. Evidence of gut microbiota changes during dietary, medicinal or surgery interventions intended for weight loss and for improving metabolic complications allowed establishing similar relationships where obesity was associated with reductions in species diversity and increases in bacterial taxa like Proteobacteria (enterobacteria) and Bilophila wadsworthia. By contrast, healthy metabolic phenotypes were often associated with increases in the phyla Bacteroidetes or Bacteroidetes/ Firmicutes ratio or the genera Bacteroides, Prevotella, Akkermansia, Faecalibacterium or Christensenella.[4, 5] However, findings were not fully consistent across studies partly due to the heterogeneity of the studies and limitations of their designs. Further meta-analyses have indicated that the only biomarker that could be generalized for obesity was reduced bacterial species diversity.[6] It is also likely that all obese subjects cannot be categorized by the same dysbiotic pattern, particularly considering the high interindividual variability of the microbiota and complexity of the metabolic phenotypes (obesity with and without other complications). More recently, the gut microbiota alterations that precede the development of obesity have been identified as causally involved in the aetiology. Of note it is a recent longitudinal study showing that a reduced bacterial species diversity, linked to unhealthy dietary habits, provides a scenario favouring the overgrowth of Proteobacteria (enterobacteria), which precedes the development of overweight during a 4-year follow-up in children.[7]

The most consistent microbiota based biomarker associated with obesity is a reduced diversity of bacterial species, which may also predispose to the development of obesity, chronic inflammation and metabolic complications.

Gut microbes influence energy metabolism through their capacity to increase the human ability to metabolize nutrients and extract calories from the diet as well as regulating the absorption of sugars and lipids and their deposition in peripheral tissues [8]. Gut microbes and their metabolic products are also involved in the regulation of the enteroendocrine system, for example, via the production of short-chain fatty acids, which induced the synthesis of intestinal hormones (e.g., GLP-1, PYY) that act via endocrine and neural routes regulating appetite, food intake and glucose metabolism [9]. Moreover, the gut microbiota is a major regulator of the gut barrier and the immune system, whose alterations are implicated in obesity-associated low grade inflammation and insulin resistance as detailed below and schematized in (Figure 1).[2,3]

It is likely that a unique pattern of intestinal dysbiosis for obesity cannot be identified and may depend on the underlying metabolic complications and other biological and environmental features of the individual.

Unhealthy diets cause defects in the intestinal mucosal barrier affecting its penetrability and favouring the translocation of bacterial components, such as the bacterial lipopolysaccharide (LPS) and the peptidoglycan or even whole microorganisms, which may activate innate immunity in metabolically active organs. The defective intestinal mucosal barrier has been attributed to local inflammation caused by diets rich in saturated fat and the diet-induced dysbiosis as well as to associated disturbances in the mucus layer [10] and in antimicrobial peptides production by Paneth cells (Reg3γ, lysozyme 1) [11]. For example, increased LPS plasma levels (known as “metabolic endotoxemia”) was shown to cause obesity and metabolic dysfunction in animal models and to be associated with an elevated body mass index, HF feeding, postprandial inflammation and risk of T2DM in humans. This could be favoured by the overgrowth of Gramnegative bacteria like enterobacteria, which are a source of LPS under HF feeding. LPS could activate innate immunity in the gut and beyond and induce the recruitment of inflammatory immune cells in metabolic tissues, like macrophages. Diets rich in saturated fat may also promote the growth of other Gram negative bacteria like Bilophila wadsworthia, which generates hydrogen sulphide, a toxic metabolite for enterocytes leading to a leaky gut, inflammation and metabolic dysfunction.[12] Finally, HF diet (HFD) may also increase circulating peptidoglycans, likely through the diet-induced changes in the expression of the antimicrobial peptide lysozyme 1 that hydrolyse components of the bacterial cell-walls. Depending on the peptidoglycan type, these could act as Nod1 ligands of pro-inflammatory macrophages of the adipose tissue or liver causing insulin resistance, while opposite effects seem to occur in pancreas beta cells, possibly as a counterbalance mechanism.[13]

Similar to other metabolic organs, including the adipose tissue and liver, breakdown of immune homeostasis has been observed in the intestine during obesity. In diet-induced obesity diverse subsets of innate and adaptive immune cells within the gut adopt a pro-inflammatory phenotype, primarily demonstrated by increases in proinflammatory macrophages and cytokines (IFNγ).

In parallel, there are reductions in proportions of Treg cells and type 3 ILCs producing IL-22, which help to maintain mucosal integrity and intestinal homeostasis in lean subjects.[2,3] Some of these alterations are reversed through microbiota depletion (e.g., antibiotic treatment) or the administration of, for example, specific bifidobacteria that also restore diet-induced intestinal dysbiosis in obesity, supporting a causal role of the gut microbiota in metabolic inflammation.[3] Also, intestinal IgA+ immune cells act as mucosal mediators of whole-body glucose regulation in HFD-induced obesity. The HFD reduces the number of IgA+ immune cells and secretory IgA.

The reduction of IgA could add another level of destabilization in the bacterial community to that caused by HFD, linked to increases in gut permeability and adipose tissue inflammation.[14]

How microbiota modulation could impact the disease evolution

A clinical trial showed that insulin sensitivity could be improved in humans with MetS 6 weeks after being transplanted with gut microbiota from a lean healthy donor.[5] An increase in microbial diversity and abundance of bacteria producing butyrate was also observed. Another trial conducted in subjects with indexes of MetS receiving the microbiota of responders to bariatric surgery reported changes in the expression of dopamine receptors, which could account for a better control of food intake, but did not confirm effects on insulin resistance. Many other trials to evaluate the effects of FMT on obesity have been registered, but the outcomes have not been published yet.[5] Therefore, scientific evidence supporting the use of this strategy to tackle obesity complications is still very limited.

Intestinal dysbiosis sustained by unhealthy diets contributes to the dysregulation of the intestinal immune system, which constitutes an additional driver of obesity-associated metabolic inflammation and also represents a therapeutic target.

Consumption of diets with fibre intake above current recommendations (25 g/day for adults) improves weight maintenance and reduces the risk of coronary heart disease and T2DM, according to a large body of evidence from humans. Some of the effects of dietary fibre are due to its physicochemical properties (e.g., indigestibility, viscosity, etc.), which contribute to reducing the glycemic responses and the energy intake, and improving the blood lipid profile. Other effects could be mediated by their impact on the subject’s gut microbiota, which ferments fibres generating metabolites such short chain fatty acids (SCFAs: butyrate, propionate, etc.) with an active role in the host’s metabolism. SCFAs induce the production of enteroendocrine peptides (GLP-1, GLP-2, PYY) that strengthen the gut barrier, induce satiety, improve glucose metabolism and exert anti-inflammatory effects in obesity. Fibre intake also increases gut microbiota diversity which is associated with a healthy metabolic phenotype. Also, beneficial effects of fibres depend not only on the type and amount of fibre, but also on the person’s microbiota structure, its diversity and the presence or absence of specific bacterial species involved in their utilization.[15] Altogether this points to the need of progressing towards more personalized dietary recommendations.[15]

The first and second generation of probiotics: The majority of clinical efficacy trials have been conducted with bacterial strains traditionally used as probiotics for humans, “the first generation of probiotics”, which essentially include Lactobacillus and Bifidobacterium. Table 1 summarizes some examples, although much more can be found in literature, with positive and negative outcomes. A few attempts have also been made to isolate new bacterial species of the human indigenous microbiota, consistently associated with a healthy metabolic phenotype, with a view to create a “second generation of probiotics”. These may help us to enlarge our potential to replenish the gut microbiota with missing microbes. Table 2 summarizes some of the studies conducted in animal models (preclinical trials) and the only one conducted in humans so far. 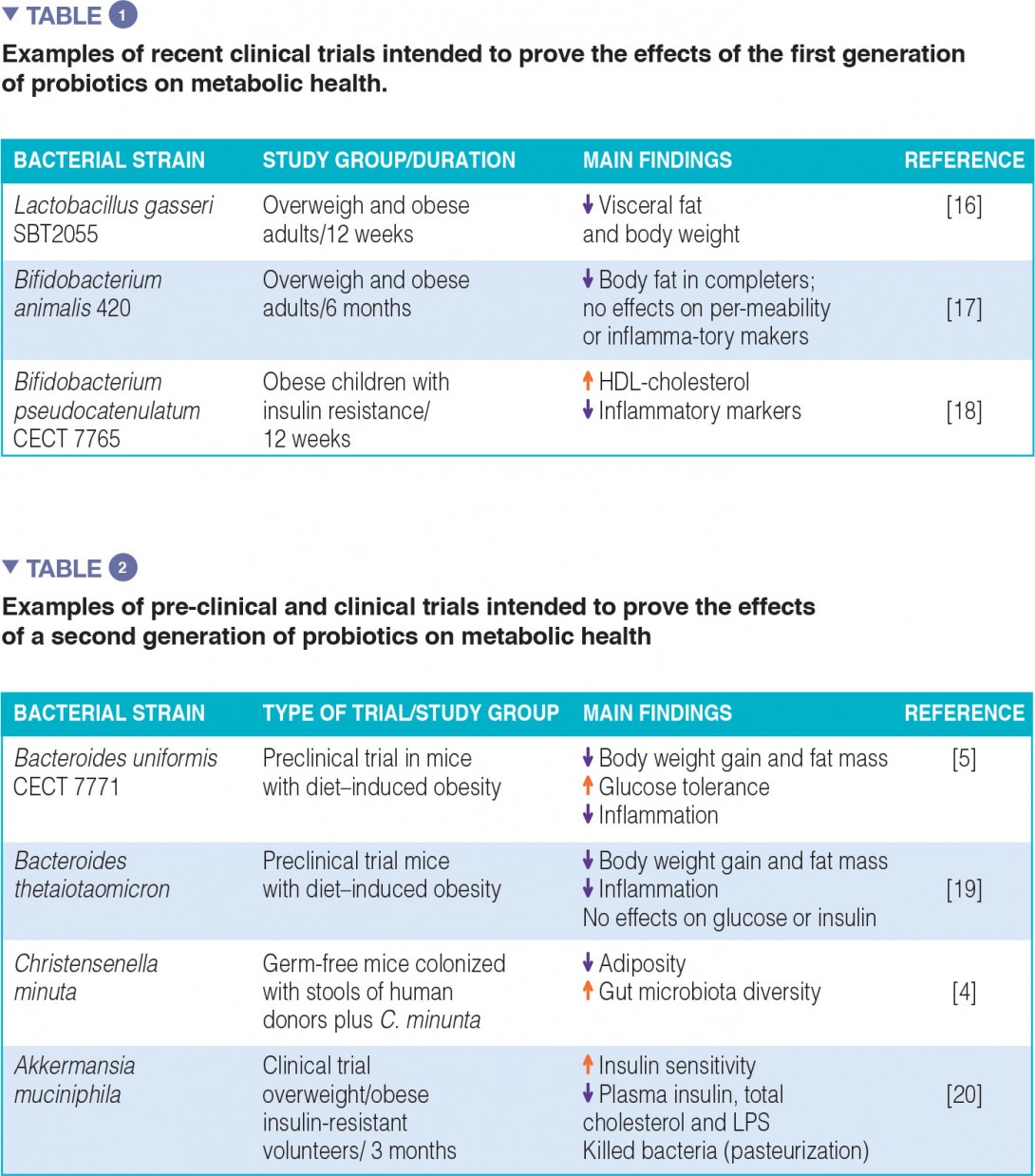 Scientific evidence confirms the role of gut microbiota alterations, partly due to unhealthy diets, in obesity and metabolic complications. Intestinal inflammation is emerging as a driver of systemic inflammation in obesity. This process is modulated by the gut microbiota and the diet, which altogether represent both a cause and a therapeutic target. Experimental trials provided proof-of-concept that a “healthy microbiota”, specific intestinal bacteria or dietary fibres that potentiate their functions could play a role in obesity management. To make further progresses towards the development of tangible solutions for obesity, further efforts are still needed to identify the effector intestinal bacteria that cooperate in reprogramming obesity and to personalize diets in order to optimize gut microbiota functions in support of our metabolic health.