Due to a lack of evidence-based data on therapeutic efficacy, there is uncertainty in the choice of treatment regimens in children who are newly diagnosed with ulcerative colitis (UC). This is why the authors hypothesized that clinical, transcriptomic, and microbial factors prior to treatment could predict the course of the disease. This inception cohort study recruited patients aged 4 to 17 years with newly diagnosed ulcerative colitis in 29 sites in the United States and Canada. Patients initially received mesalazine or corticosteroids with a pre-established protocol for escalation to immunomodulators (thiopurines) or biologic therapy with anti-TNF. RNA sequencing was used to define rectal gene expression before treatment, and 16S sequencing to characterize rectal and fecal microbiota. The primary outcome was corticosteroid-free remission at week 52 with no therapy other than mesalazine.

Clinical, biological and/or endoscopic scores such as the PUCAI (pediatric ulcerative colitis activity index), are used to classify the severity of pediatric UC. Disease severity can be scored as mild (PUCAI 10-30), moderate to severe (35-60) or severe/fulminant (≥ 65). 5-aminosalycilates may be effective in mild forms, while corticosteroids are used in moderate disease, although some children will become steroid-dependent or refractory and require escalation of therapy to immunomodulators or anti-TNFα.

However, there is no prospective study evaluating the response to standardized therapy in newly diagnosed UC. 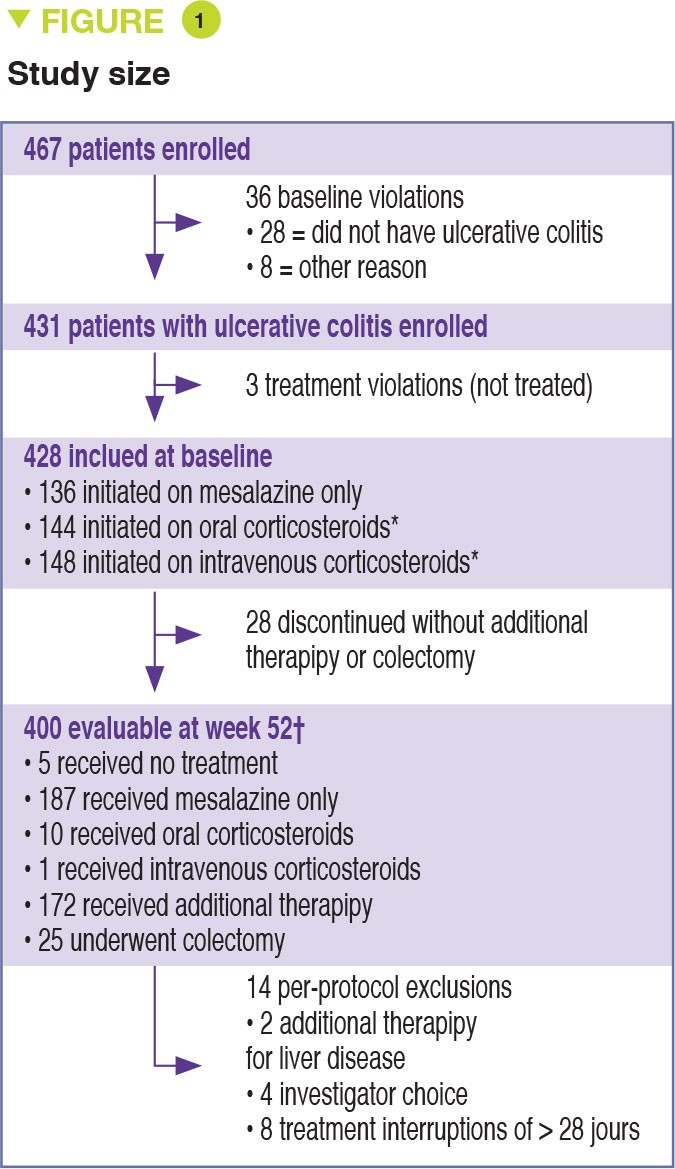 Between 2012 and 2015, 467 children aged 4 to 17 years were recruited into this prospective multicenter study conducted in 29 sites in the United States and Canada (Figure 1). The primary outcome was week 52 remission, defined by a PUCAI score < 10, with no therapy other than mesalazine (no corticosteroids and no colectomy). Baseline severity was defined as mild (therapy with mesalazine or oral corticosteroids with PUCAI < 45), or moderate to severe (oral corticosteroids with PUCAI ≥ 45 or intravenous corticosteroids). In addition to the usual clinical and biological parameters, this study also assessed gene expression from rectal biopsies as well as the rectal and fecal microbiota before treatment. 428 children started therapy: mean age was 12.7 years, 50% female, 42% with mild disease (mean PUCAI 31.9 ± 12.1 SD) and 58% with moderate to severe disease (mean PUCAI 62.9 ± 13.2 SD). At week 52, 150 (38%) of 400 evaluable participants achieved corticosteroid-free remission, of whom 80 (49%) had mild disease and 70 (30%) had moderate to severe disease (Table 1).

The clinical, biological, and endoscopic parameters that were associated with corticosteroid- free remission were validated in an independent prospective cohort of 307 children. It should be noted that corticosteroid- free remission was achieved by week 16 for moderate to severe disease (after which it can no longer be achieved) whereas it could be obtained up to week 52 in mild forms. Moreover, even patients with very severe disease were able to achieve week 52 corticosteroid-free remission (41/133 [31%] with PUCAI ≥ 65) and, conversely, some patients with mild disease were receiving anti-TNFα at week 52 (13/90 [14%] with PUCAI < 35). The authors identified 33 genes that were differently expressed between patients with moderate to severe disease who achieved corticosteroid-free remission (n = 51) or not (n = 101). Among these genes, 18 genes associated with cellular transport and ion channels were up-regulated and 15 genes involved in the antimicrobial response were down-regulated (Figure 2). The antimicrobial α-defensin signaling pathway showed the strongest negative correlation with week 52 corticosteroid-free remission. However, all 33 genes were negatively associated with the need for therapeutic escalation to anti-TNFα. 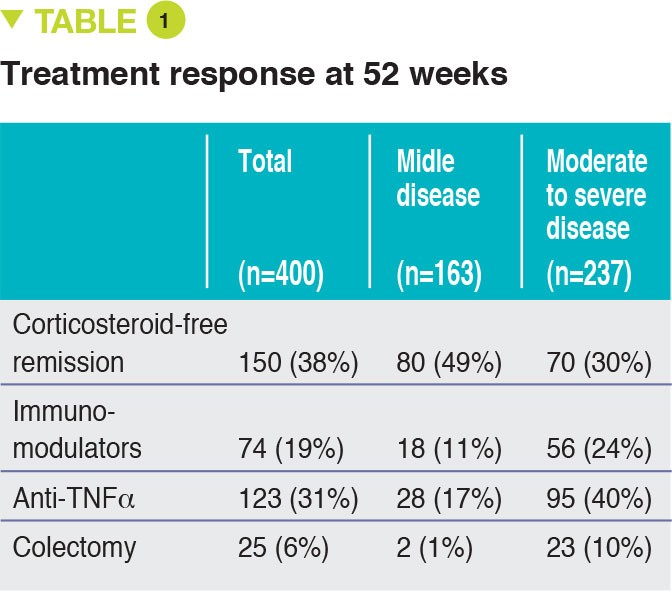 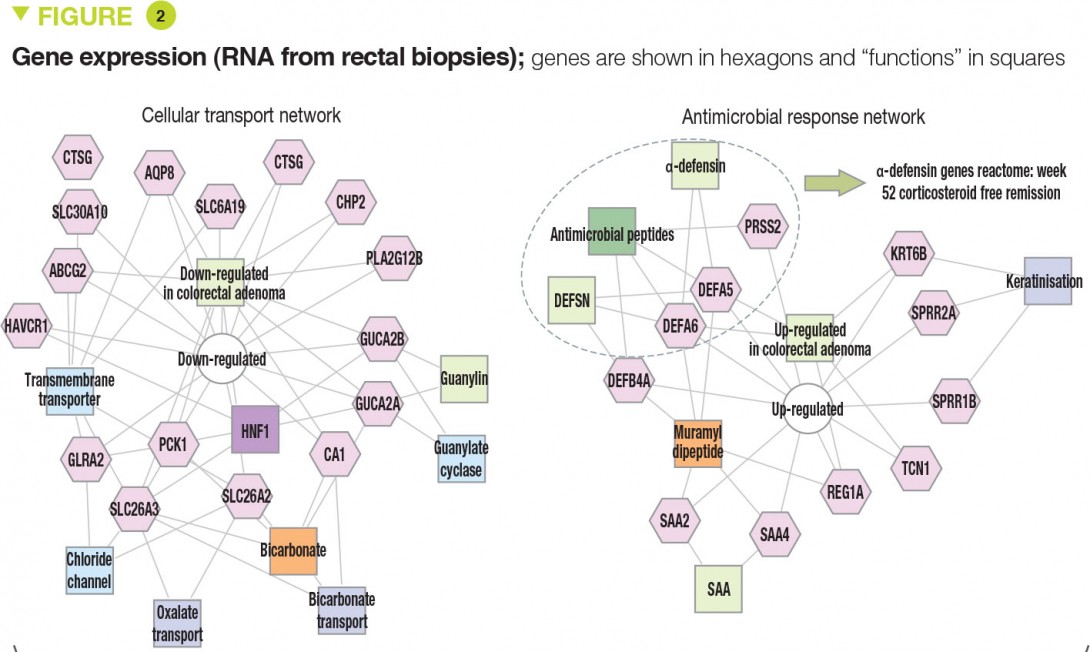 It is important to keep in mind the predictors of corticosteroid-free remission and therapeutic escalation as determined from multivariate analyses.

Predictors of week 52 corticosteroid-free remission were:

Predictors of escalation to anti-TNFα therapy were:

This study highlights the parameters that should be taken into consideration to guide the choice of therapy in children who are newly diagnosed with ulcerative colitis. Analysis of rectal gene expression and microbiota could both help predict the response to treatment and identify new therapeutic targets.

Commented article
Parkinson’s disease: discovery and inhibition of levodopa metabolism by gut bacteria
Focus on the 4th biennial meeting of the ESNM
Focus