Bacterial vaginosis and vulvovaginal candidiasis are two very common gynecological infections. The first is a bacterial infection while the second is due to the spread of a fungus.

Bacterial vaginosis (BV) is the most frequently reported microbiological syndrome amongst women of reproductive age. The Amsel criteria, although controversial, remains the standard method for diagnosing bacterial vaginosis and is based on the presence of at least three of the following clinical criteria:3

The Nugent score, a microscopic examination of a Gram stain of vaginal secretions, is also used in many countries and classifies the bacterial flora into three groups: healthy if the score is between 0 and 3, intermediate if the score is between 4 and 6, and indicative of bacterial vaginosis if the score is greater than 6. Some authors believe that BV may actually be a set of common clinical signs and symptoms caused by a wide range of pro-inflammatory bacteria, coupled with a host-dependent immune response. As a result, some experts prefer to refer to it as polymicrobial vaginosis.3 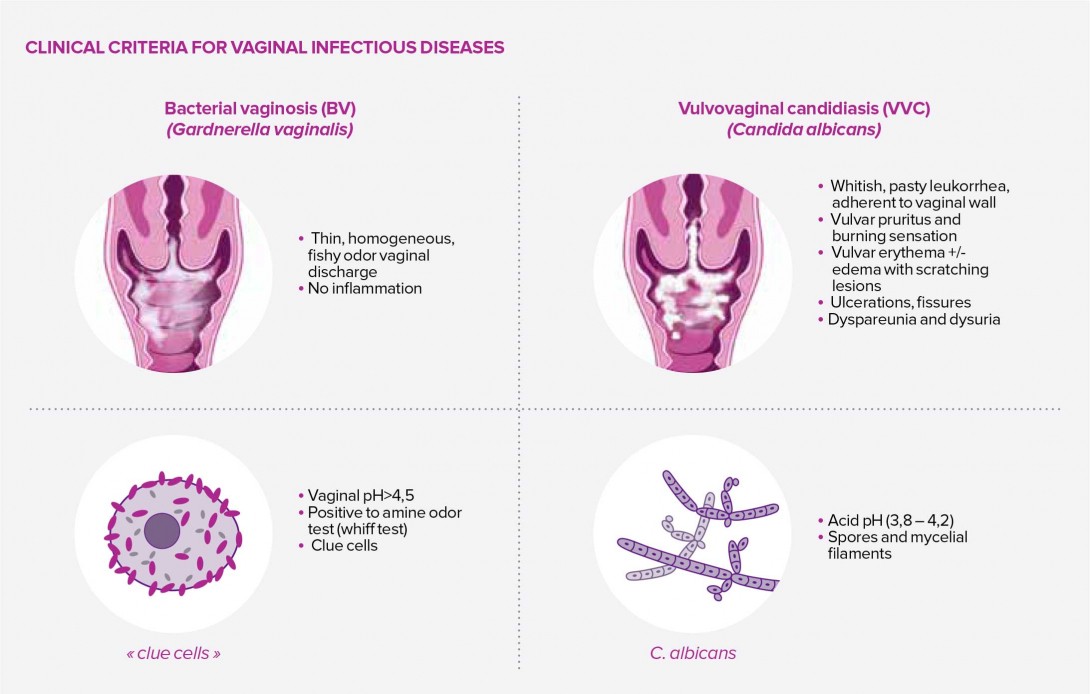 Vulvovaginal candidiasis (VVC), so called because it is linked to the spread of fungi (more specifically, yeasts) of the Candida genus, is considered the second most common vaginal infection after BV: 70%-75% of women are thought to have been affected at least once in their lifetime, 50% twice, and 5%-10% suffer from recurrent cases.

The symptoms and signs of vulvovaginal candidiasis are not clear, especially since colonization by the fungus is not a good indicator, with some women remaining asymptomatic despite colonization.4 The most common clinical signs are vulvar pruritus, a burning sensation accompanied by vaginal pain or irritation that may lead to dyspareunia or dysuria, and sometimes vulvar or vaginal erythema, edema, or lesions.4

Risk factors include pregnancy (and other situations where estrogen levels increase), diabetes mellitus, immunosuppression and the use of systemic antibiotics. Incidence increases with the commencement of sexual activity, but the links with different types of contraceptive remain unclear.5

Lastly, many Candida yeasts alternate between a unicellular phase and a much more virulent filamentous phase. The filamentous forms offer greater mechanical resistance, which assists the colonization and invasion of host tis- sues and confers increased resistance to phagocytosis.4