Probiotics as a potential therapeutic tool

Although they are not part of the standard treatment for gastroenteritis, probiotics7 could play a role in the treatment of patients with acute diarrhea, provided the strain(s) used had been proven effective to alleviate symptoms.

In the past several years, the use of probiotics has grown significantly. The increasing number of works on these “beneficial” microorganisms have largely contributed to this trend. But not all microorganisms can be called “probiotics”: they need to be able to survive in the GI tract, resist to gastric acid and digestive enzymes, temporarily populate the intestines and they must have proven effective. The term can only be applied to microorganisms that resist degradation, are harmless to the human body, and are able to alleviate symptoms. They are generally marketed as dietary supplements or drugs, depending on their efficacy to alleviate symptoms and their degree of safety. They are composed of one or several strains or a mix of several species, and are available in many forms: capsules, powders for oral solution, orally dispersible powders, tablets...

A review of scientific literature to assess the use of probiotics in the prevention and treatment of pediatric gastrointestinal disorders showed that the benefits are specific to each strain and depend on the type of infection8. At this time, two microorganisms seem to efficiently act on gastroenteritis symptoms by reducing their duration: Saccharomyces boulardii yeast as well as Lactobacillus rhamnosus GG (LGG) bacteria. More generally, these probiotics seem to improve symptoms, and even more so if they are administered at an early stage of the infection, and if the latter is of viral origin. In case of antibiotic-induced diarrhea, S. boulardii and L. rhamnosus GG could also have a beneficial effect. However, to prevent relapses of Clostridium difficile infections and traveler’s diarrhea, it seems that only S. boulardii has an effect on symptoms.

In case of rotavirus-induced gastroenteritis, these probiotics reduce the duration of the episode by a day or two2. They lower the levels of molecules that improve the inflammatory process, by stimulating the immune response and promoting proliferation and/or migration of intestine cells responsible for the transport of nutrients, thus facilitating glucose–and consequently water–absorption. Beyond the prevention of diarrhea in children receiving antibiotics or hospitalized children, these strains (S. boulardii among others) prevent 85% of diarrhea episodes related to the consumption of contaminated food or water9 (traveler’s diarrhea). To be effective, these treatments must be taken a few days before departure and during the entire journey, and even after. 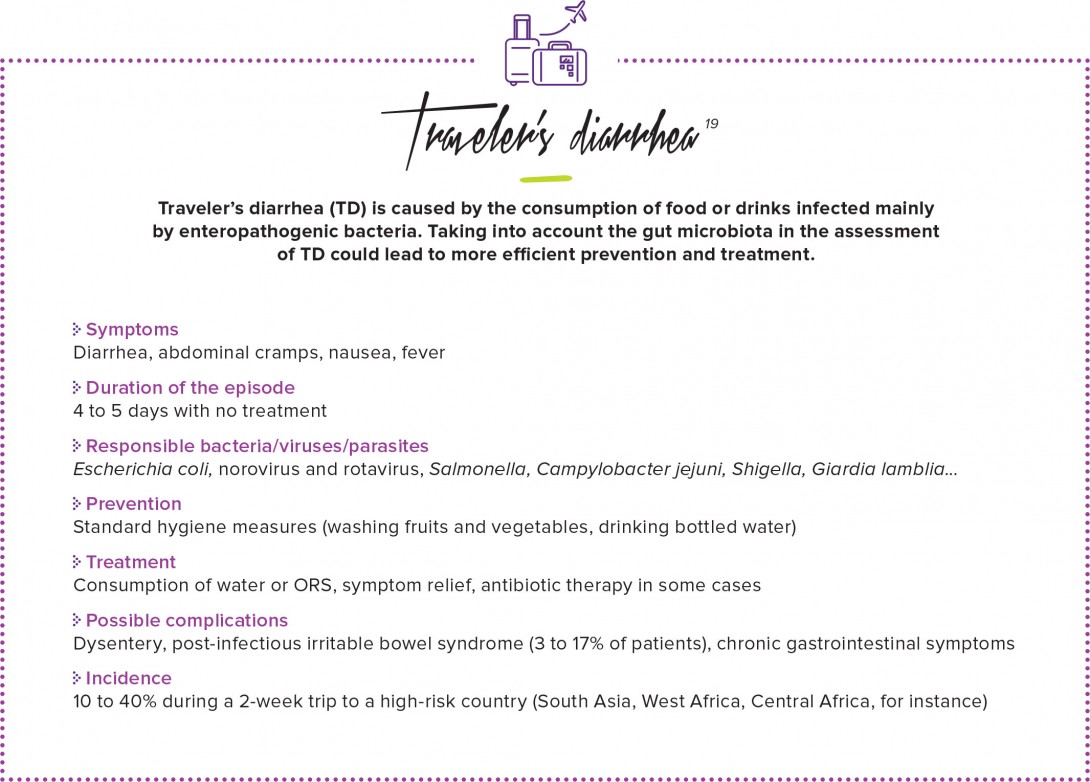 7 According to the World Health Organization (WHO) and the Food and Agriculture Organization of the United Nations (FAO), probiotics are “live microorganisms which, when administered in adequate amounts, confer a health benefit to the host.

8 Hojsak I. Probiotics in Children: What Is the Evidence? Pediatr Gastroenterol Hepatol Nutr. 2017 Sep

Can healthy eating habits strengthen immunity?
Focus
Gastroenteritis and other types of infectious diarrhea: when your microbiota is struggling
Created 23 September 2019

Gastroenteritis and other types of infectious diarrhea: when your microbiota is struggling

How to act on the microbiota to combat diarrhea

Diet: a key factor Probiotics as a potential therapeutic tool

Rotavirus and norovirus are to blame What about the gut microbiota?

When bacteria and parasites attack the gut microbiota Diarrhea and use of antibiotics: case study Expert Interview : Dr Julie Lemale