Microbiota. You’ve just discovered this word. Well, first good news: you are on the right article to know more about it. What is behind this word? What are the major breakthrough? What we still have to discover? Dr. Deanna Gibson tells you everything about it.

She is an experimental scientist who studies how the gut microbiome develops in response to the environmental cues like diet and how this drives immunity. She is passionately involved in finding the cure for IBD.

There is many research in the gut microbiota field.
In your point of view, what is the biggest breakthrough these last years?

Deanna Gibson: Just over a decade ago, scientists came to appreciate how widespread and vast the effects that the microbiota has on human health. Still, while much excitement grew over the years of finding the microbiome as a major factor associated with many disease conditions, a healthy dose of skepticism was also present to try and explain how a  major piece of the puzzle had been missed to explain major diseases like:

Breakthroughs, ~ a decade ago, came from the use of (sidenote: Germ-free mice mice that have no microbes at all, raised in sterile conditions. ) often transplanted with human feces from various disease conditions, which guided our view that the microbiome was central to many mammalian physiological processes. Early evidence demonstrated that the human gut was a perfect environment for many microbes, which helped propel the beneficial relationship between us and our microbes. The (sidenote: Microorganisms Living organisms that are too small to be seen with the naked eye. They include bacteria, viruses, fungi, archaea and protozoa, and are commonly referred to as “microbes”. What is microbiology? Microbiology Society. ) themselves are vital for balanced and effective immune responses since pieces of them act like a key in our guts, unlocking responses that keep us protected and healthy.

Obesity studies revealing relationships between the gut microbiome and energy metabolism using fecal transplants from humans into germ-free mice,2 transformed how we understood the gut microorganisms' role in causing and regulating obesity. These observations captivated us since a few clever experiments uncovered that (sidenote: Western diet Diet rich in processed foods, refined sugar, salt, saturated fats (red meats) and trans fats (pastries) Zinöcker MK, Lindseth IA. The Western Diet-Microbiome-Host Interaction and Its Role in Metabolic Disease. Nutrients. 2018 Mar 17;10(3):365.  ) intake resulted in the extinction of microbes and this was compounded over several generations.3

Effectively, the western gut, starved of fiber, had been replaced with microbes that chew away at our protective (sidenote: Mucus Protective substance that’s excreted from multiple areas of the body (mouth, throat, lungs, intestines, stomach ... Mucus itself consists of multiple constituents, but its major component is a substance called mucin. The mucins in mucus can work as a selective barrier, lubricant, or viscous material depending on their structure. Recent studies have shown that the maturation and function of the mucus layer are strongly influenced by the gut microbiota.   Brandtzaeg P. (2017) Role of the Intestinal Immune System in Health. In: Baumgart D. (eds) Crohn's Disease and Ulcerative Colitis. Springer, Cham. Schroeder BO. Fight them or feed them: how the intestinal mucus layer manages the gut microbiota. Gastroenterol Rep (Oxf). 2019 Feb;7(1):3-12. ) in the gut potentiating colonic erosion and an unhealthy gut.4 These compelling studies shaped the way we viewed the microbiome and the undeniable evidence that indeed the microbiome was a key factor in many chronic diseases. 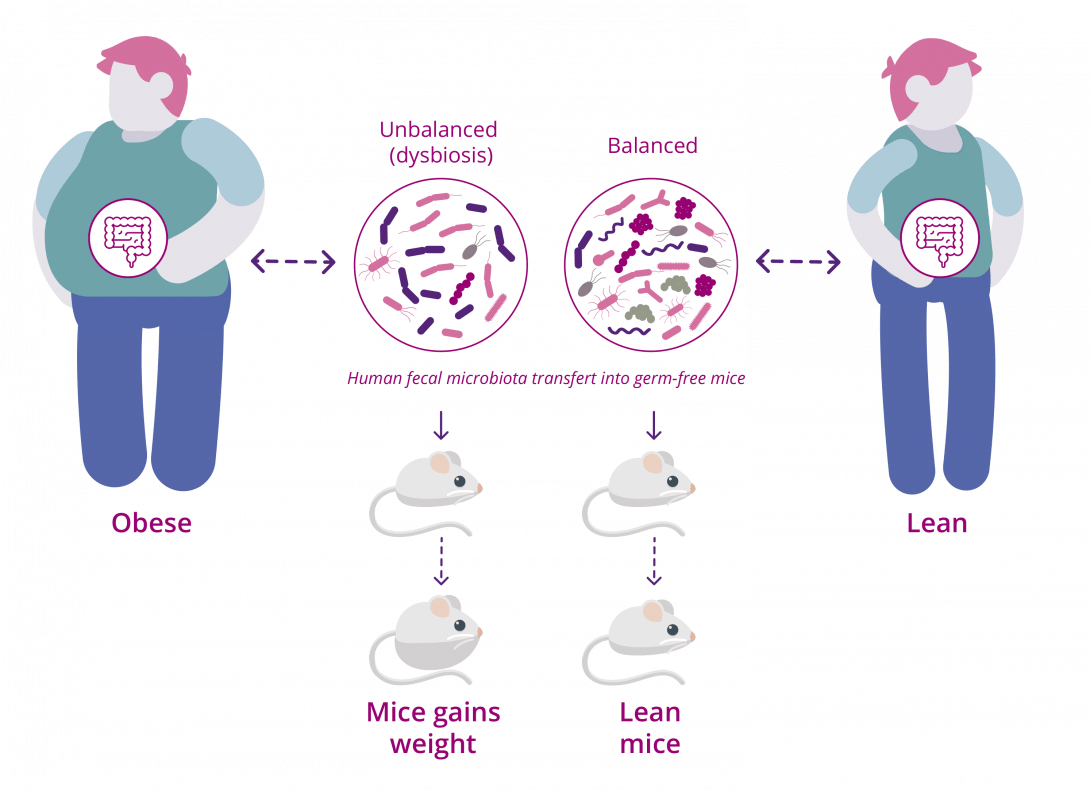 Most recently, the field has again been revolutionized with our new perceptions that the gut microbiota forms an axis with the brain.

Many scientists posit that a bridge between the gut and the brain promotes brain morphology, neurogenesis, and complex behaviors. There is considerable evidence that molecules or (sidenote: Metabolites Small molecules produced during cellular or bacterial metabolism. For example, short-chain fatty acids are metabolites produced by intestinal microbiota during fermentation of non-digestible complex carbohydrates (fibers, etc.). Silva YP, Bernardi A, Frozza RL. The Role of Short-Chain Fatty Acids From Gut Microbiota in Gut-Brain Communication. Front Endocrinol (Lausanne). 2020;11:25.  Lamichhane S, Sen P, Dickens AM, et al An overview of metabolomics data analysis: current tools and future perspectives. Comprehensive analytical chemistry. 2018 ; 82: 387-413 ) influenced by the microorganisms, perhaps even produced by microbes, can signal through the central nervous system influencing behaviors including psychosis, anxiety, even personality, and certainly neuroinflammatory conditions.5

Read more
How our gut constantly talks to our brain

Still scientists must affirm a causal role of the microbiota on brain processes. A recent study uncovered the role the gut microbiota has on social behaviors through neuronal circuits that mediate stress responses in the brain. It seems that specific bacteria in our gut flora may limit the activation of specific brain neuronal axis.6 This breakthrough in the colliding fields of the gut microbiota and neurology gives us hope that by changing the microorganisms we harbor in our bodies, we can have better control over our moods, choices, and cognitive function.

D.G.: Many people have indeed acknowledged that the gut microbiota is considered our second brain. The evidence supports that the microbiota is implicit in controlling physiological processes that influence human health and disease. While a healthy degree of skepticism is needed when evaluating microbiome data, specific key evidence would be hard to refute, including the role of the gut microbiota in energy metabolism with consequences to metabolic health. Additionally, it is clear that the gut microbiota also influences cardiovascular health since studies using mice that have no microbes at all have less vascular development.

Other critical physiological effects of the gut microbiota include immune cell development, (sidenote: Immune tolerance State of unresponsiveness of the immune system to substances or tissues that have the potential to induce an immune response. Immune tolerance_Nature portfolio   ) , brain development, liver function, and even infectious disease susceptibility. Finally, the evidence that the gut microbiota promotes cancer therapies is compelling. Datum show that the types of microbes present in the gut can predict cancer therapy success, revealing the microbes themselves are active players in host drug metabolism.

Innovative therapies that focus on changing the microbiome, including those for inflammatory bowel disease, obesity, diabetes, autism, and fecal transplantations for the treatment of Clostridioides difficile infections, may be more successful than current therapies, including antibiotics treatment. The latter reveal at least something in the feces of healthy people, whether a microbe, consortium of microbes, or metabolites, can cure C. difficile infection. Studying single and or several combined microorganisms as drugs for specific diseases will be vital in confirming the microbiota's place in modern medicine.

The only validated indication for FMT is recurrent Clostridioides difficile infection. This practice may present health risks and must be performed under medical supervision, do not reproduce at home!

What we still have to discover?
Can we imagine in 10 years target the gut microbiota to diagnose or to treat associated diseases?

D.G.: While we have learned over the past decade that we must pay attention to the large plethora of microbes living inside (and outside) our bodies, we have only scratched the surface of the microbiome field. In the next decade, we aspire to ascribe specific mechanistic roles to specific types of microbes in the microbiome, which will further help identify new and effective probiotics.

Probiotics: essential information for understanding and choosing them correctly.

Now that we can appreciate how an unbalanced microbiota ( (sidenote: Dysbiosis Generally defined as an alteration in the composition and function of the microbiota caused by a combination of environmental and individual-specific factors. Levy M, Kolodziejczyk AA, Thaiss CA, et al. Dysbiosis and the immune system. Nat Rev Immunol. 2017;17(4):219-232.   ) ) is associated with several diseases, we must learn how to reset this dysfunctional microbiome with the hope that this will also reset the inflammatory and metabolic processes the microbiome influences.

Given that recent evidence supports that drug metabolism is altered by microbiota, the future of medicine will have to be personalized. Every individual has their own set of microbes that make up their microbiome, meaning a more personalized approach to solving medical problems will be unavoidable.

This surely will include microbiome-based therapeutics or even personalized dietary guidelines as adjunctive therapies alongside drugs since diet is one of the most significant predictors of the gut microbiome.

The role of the gut microbiota in human health: 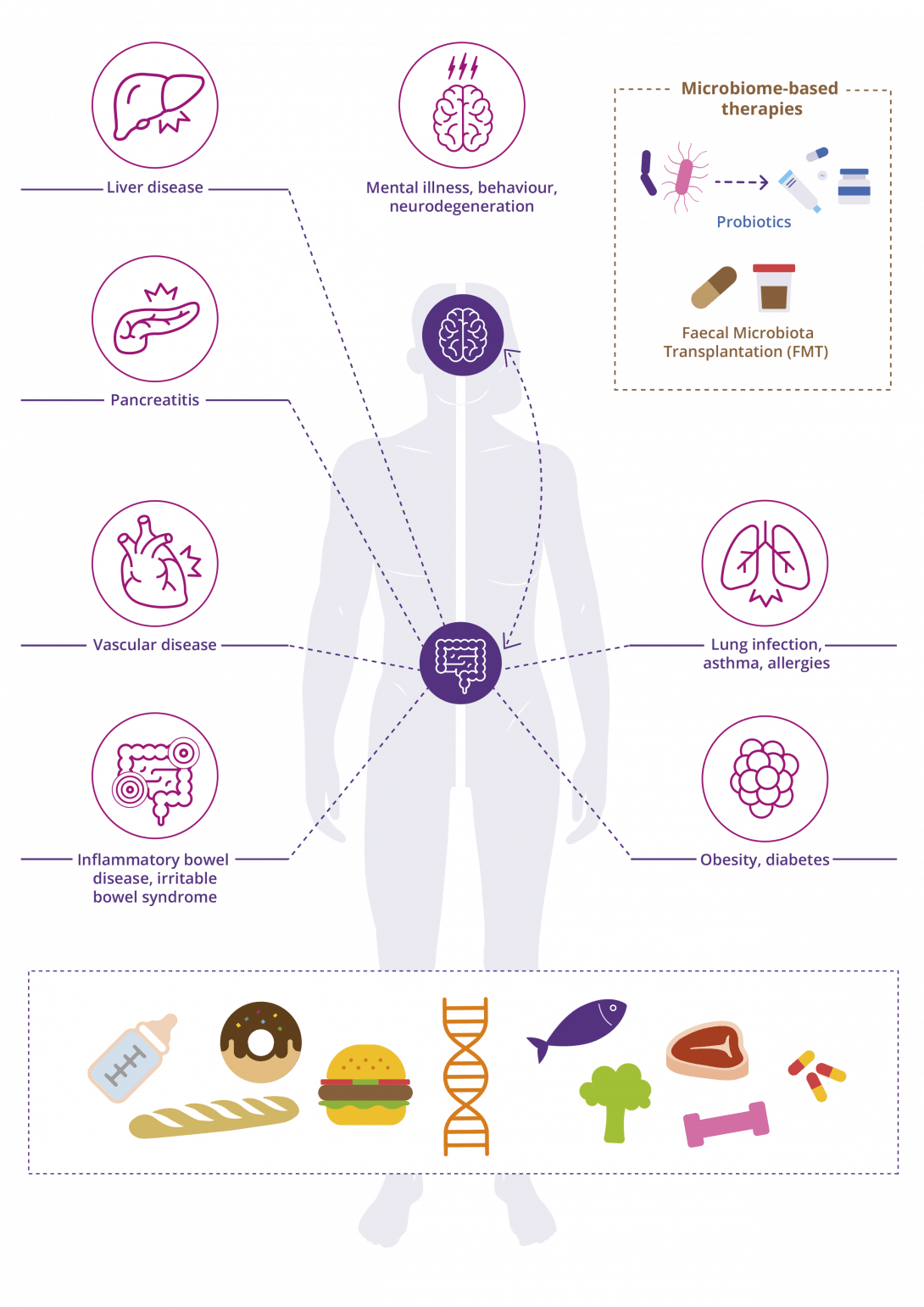 Several factors such as lifestyle, age, dietary patterns, antibiotic use, genetics & exercise can influence the gut microbiota. In the past decade, research has shown that bi-directional communication between the gut-brain-axis occurs, which can impact brain function and influence mental illnesses such as anxiety, depression & schizophrenia. While essential for the development of our immune system, the gut microbiota is also involved with various diseases including inflammatory bowel disease, vascular disease, obesity, diabetes, liver disease, and allergies.

The more we understand about the gut microbiota, the better therapies we can provide. Future treatments such as probiotics and fecal microbiota transplantation will help a diseased microbiome to improve overall gut health. 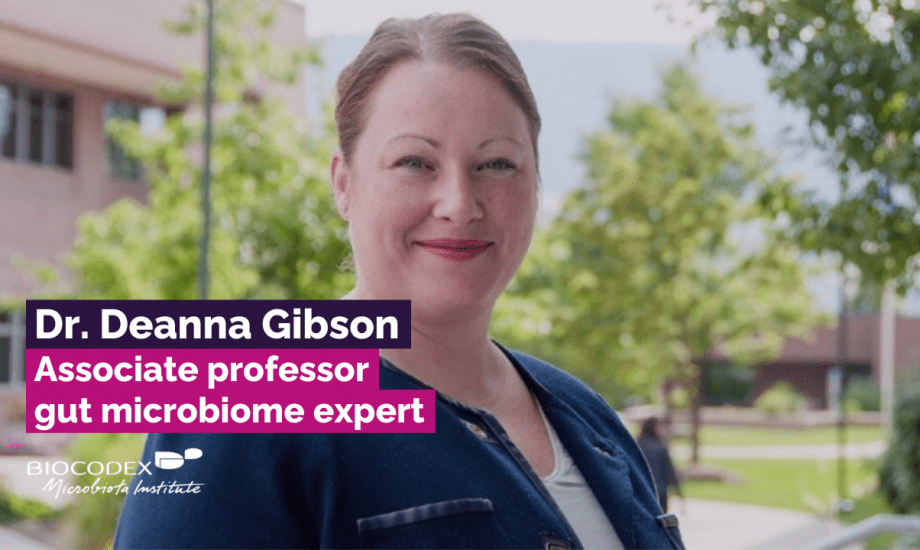 Learn other surprising facts about your health with our quizzes!

On the occasion of World Microbiome Day, Biocodex Microbiota Institute is unlocking the secrets of these fascinating microorganisms that inhabit our bodies. Get the inside scoop and discover the essential role of the microbiota on your health!

Is it normal for antibiotics to give my child diarrhea?

What is making me in such a good mood today?

What is your best advice to age well?

She is an experimental scientist who studies how the gut microbiome develops in response to the environmental cues like diet and how this drives immunity. She is passionately involved in finding the cure for IBD.

Microbiota in summer: how does it affect your health?

Schizophrenia and microbiota: has the link been confirmed?

Read the article
My health, my microbiota
Follow our Facebook page
My microbiota as a woman
Read more to know the different things you can do to keep your vaginal microbiota balanced