Should we go further than a gut-skin axis and include the brain also?

As early as 1930, dermatologists John Stokes and Donald Pillsbury25,26, suggested that emotional states such as anxiety or depression can alter the gut microbiota and induce local or systemic inflammation27. They recommended the use of fermented milk to reintroduce beneficial microorganisms.

For example, stress hormone cortisol is thought to alter the composition of the gut microbiota and blood levels of neuroendocrine molecules (tryptamine, trimethylamine and serotonin), ultimately affecting the skin barrier and skin inflammation.25

Is the gut-brain-skin axis a two-way axis, i.e. can the skin in turn act on the gut via the nervous system? 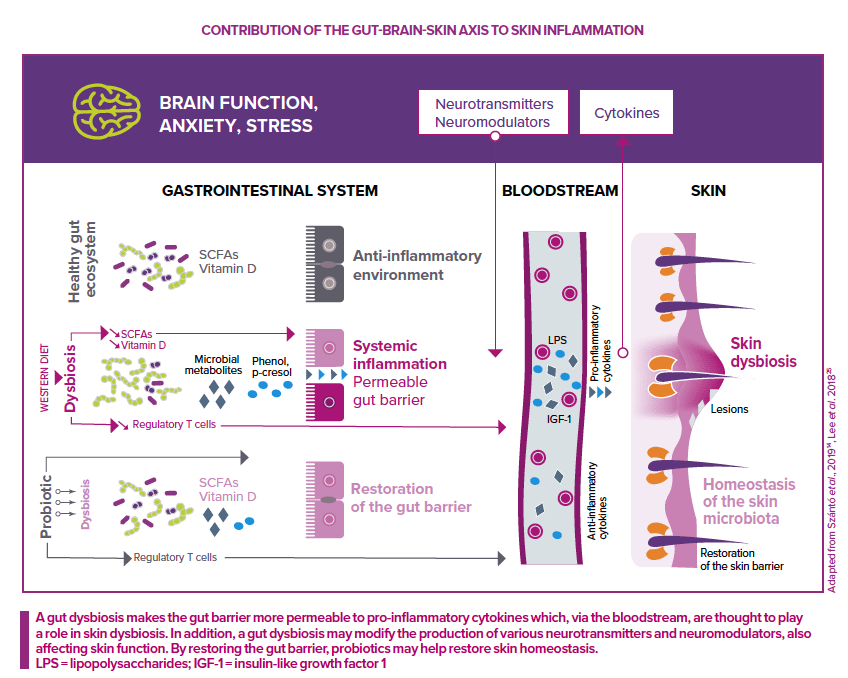 This gut-brain-skin axis is implicated in certain skin diseases. For example, upregulation and strong expression of substance P (a neurotransmitter and neuromodulator of the central and peripheral nervous systems) are observed in both acne and gut dysbiosis. Substance P is known to trigger the expression of many pro-inflammatory mediators implicated in the development of acne (IL-1, IL-6, TNF-α, PPAR-γ).22,23

The gut-brain-skin axis is also thought to be involved in atopic dermatitis.25 An altered gut microbiota may modify the production of various neurotransmitters and neuromodulators, affecting the functioning of the skin barrier and immune system, two key parameters of the pathophysiology of atopic dermatitis.25

Tryptophan produced by the gut microbiota is thought to cause skin itching, while lactobacilli and bifidobacteria may inhibit these sensations.25 Moreover, some researchers ask whether the gut-brain-skin axis is a two-way axis: can the skin in turn act on the gut via the nervous system?22

26 Stokes JH, Pillsbury DH: The effect on the skin of emotional and nervous states: theoretical and practical consideration of a gastrointestinal mechanism. Arch Dermatol Syphilol 1930, 22:962-93.