Laced with blood vessels, packed with nerves, heavily involved in the immune system and massively colonized by microbial communities, the gut and the skin have a number of things in common.22 But that’s not all. Recent years have seen growing evidence for the existence of a link between the gut and the skin (the gut-skin axis) or even the gut-brain-skin axis.23

The gut microbiota appears to play an active role in the pathogenesis of various skin diseases, including psoriasis, rosacea and atopic dermatitis.

Three mechanisms are at play: the composition of the skin microbiota, the skin’s barrier effect and the skin’s immune response. 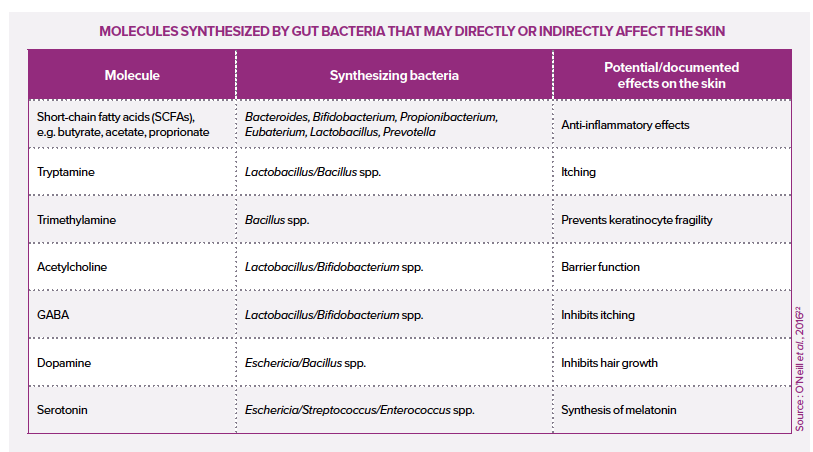 Skin ulcers or psoriasis in patients with inflammatory bowel disease (IBD), dermatitis and psoriasis in celiac patients, a gut dysbiosis and H. pylori infection in people with rosacea... There are many examples of associations between digestive and skin conditions.22

Although the gut-skin axis is not fully understood, several explanations have been put forward. 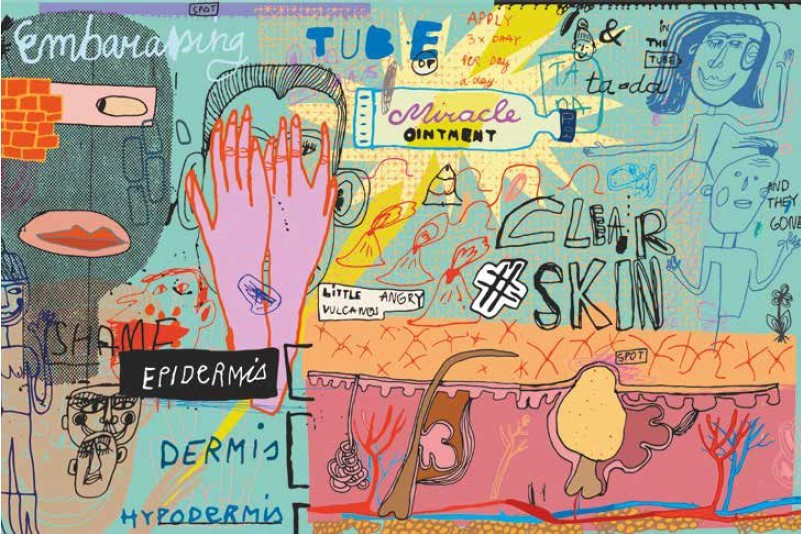 COMPOSITION OF THE SKIN MICROBIOTA

The gut microbiota may influence the composition of the skin microbiota.23 Short-chain fatty acids (SCFAs, e.g. acetate, propionate) produced by the gut microbiota via fiber fermentation in the gut may modify the predominance of certain microorganisms or microbial profiles in the skin. For example, gut bacterium Propionibacterium (see table) mainly produces acetate and propionate. Propionic acid has an antimicrobial effect against certain skin pathogens, particularly methicillin-resistant Staphylococcus aureus.23 In contrast, commensal skin bacteria S. epidermidis and Cutibacterium acnes have been shown to tolerate wider shifts in SCFAs.23

INTEGRITY OF THE SKIN BARRIER

A low level of vitamin D has been associated with atopic dermatitis and psoriasis. Vitamin D may be regulated by the gut microbiota and may participate in a signaling mechanism between microbiota and host.14

A high glycemic load, typical of adolescent meals in developed countries, influences insulin metabolism, ultimately triggering sebaceous gland hyperproliferation, lipogenesis and hyperplasia of keratinocytes, thereby contributing to the development of acne.14,23 This appears to be a two-way process, with the metabolic pathway in turn affecting the composition of the gut microbiota via the gut barrier. This may result in a vicious circle via a positive feedback cycle of inflammation.23

IMMUNE RESPONSE OF THE SKIN

The mechanisms by which the gut microbiota acts on the skin microbiota may also involve the modulating effect of gut microorganisms on systemic immunity.22 Some gut microbes and metabolites facilitate anti-inflammatory responses24. For example, SCFAs are thought to exert local and remote anti-inflammatory effects, particularly on the skin.22 Conversely, other metabolites may participate in the inflammatory loop and the appearance of skin diseases. For example, filamentous bacteria may promote the accumulation of pro-inflammatory Th17 and Th1 cells.23

In the case of rosacea, some authors suggest a link with Helicobacter pylori. This bacterium may exert pro-inflammatory effects via peptides.11,22

Other mechanisms have been mentioned in psoriasis, involving a decrease in beneficial species such as Faecalibacterium prausnitzii13 or Akkermansia muciniphila, with the latter thought to strengthen the integrity of the gut epithelium and protect against inflammatory diseases.1 Psoriasis patients whose blood contains bacterial DNA, have significantly higher levels of systemic inflammatory response markers, including IL-1β, IL-6, IL-12, tumor necrosis factor, and interferon γ.11