Changes in the skin microbiota can also be seen in non-pathological skin conditions. The skin is constantly exposed to various endogenous, exogenous and lifestyle factors that can affect the physical, mechanical or microbial properties of the skin barrier.19

Sensitive skin “tightens”, tingles or burns in response to stimuli that would not normally cause such sensations. It is seen both in people with normal skin and in those with a disruption of the skin barrier.19 A hyperreactive cutaneous nervous system, the skin barrier and the skin microbiota are thought to be involved.19 An alteration of the stratum corneum in sensitive subjects may contribute to penetration by chemical, environmental and microbial agents associated with increased skin sensitivity.19

Diaper rash only affects skin exposed to diaper friction, excessive hydration and a variable pH, and in constant contact with urine and feces. Candida albicans and Staphylococcus aureus are potentially involved.20

Skin sensitivity may be linked to a hyperactive cutaneous nervous system, to the skin barrier and the skin microbiota. 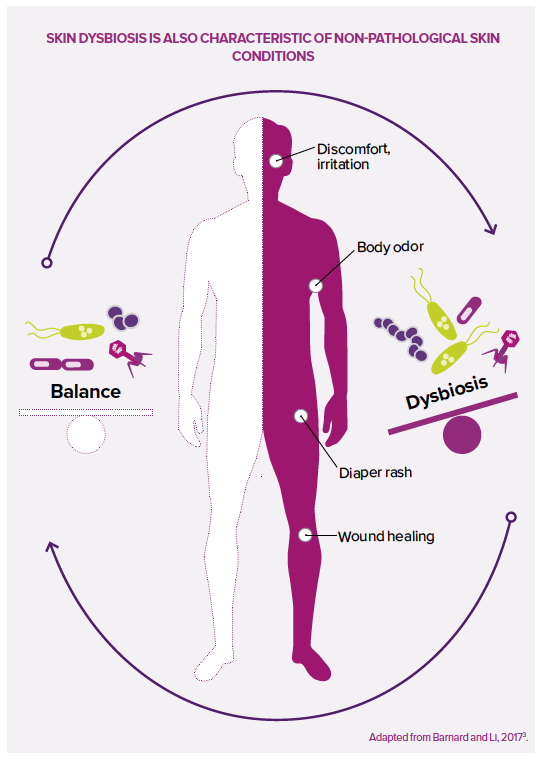 As a result of the physical tear of skin tissue, the wound healing process begins with inflammation that results from close cooperation between immune cells and bacteria involved in the process.21 Commensal bacteria such as Staphylococcus, Streptococcus, Pseudomonas and Corynebacterium have both positive and negative effects on wound healing. They stimulate the host immune system and reduce invasion by other pathogenic microorganisms, but this loss of microbial diversity is often accompanied by prolonged inflammation, which may slow wound healing.21

This close relationship between host and skin microbiota in wound healing processes could open the door to novel therapies, such as creams rich in antimicrobial peptides, biofilm-destroying probiotics or anti-inflammatory bacteria.12,21

Human body odors result from the metabolization by bacteria of sweat components (amino acids, fatty acids and glycerols), leading to the production of malodorous molecules, e.g. the “sulfurous” or “sour” odor of acetic acid produced by Staphylococcus spp. in children and adolescents, or the “sour” odor of thiols produced by Corynebacterium and Staphylococcus spp. in adults.7 The repeated use of deodorants and antiperspirants alters bacterial diversity in the armpit, favoring staphylococci over Corynebacterium, which may have counterproductive effects in adolescents.7