The novel coronavirus (SARS-CoV-2) disease 19 (COVID-19) reminds us that interactions between the gut microbiota and the immune system are essential during viral respiratory tract infections. Respiratory viruses can trigger gastrointestinal symptoms emphasizing the role of the lung-gut axis in disease. Clinical studies and experimental models indicate that acute vi ral respiratory infections alter the composition and functions of the gut microbiota, an essential component of human health. Here, we review these major changes and discuss the potential causes of intestinal dysbiosis. We also present the consequences of gut dysbiosis that develops during infection on secondary disease outcomes. Lastly, we suggest interventional strategies that might be used to target the gut microbiota in order to reduce the viral respiratory disease severity.

Viral respiratory tract infections are still a major concern worldwide as they lead to considerable socio-economic and health issues. Despite vaccine campaigns and antiviral medications, influenza - the commonly called “flu” - remains the most impacting in terms of infected individuals (5-10% of the global population) and deaths (> 600,000 per year). Along with annual epidemics, influenza is also responsible for pandemics every 10-20 years, the most famous being the 1918-1919 Spanish flu (50 million deaths) and the most recent, the 2009 H1N1 influenza pandemic (400,000 excess deaths) [1]. Pandemics are not restricted to influenza, as exemplified by the COVID-19 [2]. Of great concern is the increasing frequency of pandemics occurring over the last few decades, a phenomenon explained in part by climate changes and human practises, in general.

THE GUT MICROBIOTA IN HEALTH AND DISEASES

Clinical evidences suggest a gut microbiota dysbiosis during influenza infection. The relative abundance of Actinobacteria, Erysipelotrichea, Clostridia and beneficial butyrate producers (Lachnospiraceae and Ruminococcaceae families) is decreased in patients H1N1. On the other hand, opportunistic pathogens such as Escherichia- Shigella and Prevotella develop [5]. In experimental (mouse) models, transient gut dysbiosis also occurs with a peak at 5-7 days post-infection [6-9]. Changes occurred at taxonomic levels with no change in alpha diversity. Infection blunts the growth of health-promoting bacteria such as Lactobacilli, Bifidobacteria, and segmented filamentous bacteria. Many species capable of fermenting dietary fibres into short-chain fatty acids (SCFAs) are affected. In line, the production of SCFAs dramatically drops during influenza infection [9]. The reduced levels of beneficial commensals associate with the overgrowth of deleterious bacteria including Gammaproteobacteria (Escherichia coli) and mucus-degrading bacteria such as Verrucomicrobia (Akkermansia genus) and Ruminococcus. SARS-CoV-2 infection also triggers gut microbiota alterations in patients, including lower abundance of butyrate producers such as several genera from the Ruminococcaceae and Lachnospiraceae (Roseburia) families [5, 10]. On the other hand, a significantly higher relative abundance of opportunistic bacterial pathogens including Streptococcus (class Bacilli), Rothia and Actinomyces was observed. Of note, overgrowth of opportunistic fungal pathogens (Aspergillus and Candida spps) was also described in COVID-19 patients [11]. Collectively, viral respiratory infections lead to depletion of beneficial commensals and enrichment of opportunistic harmful pathogens. Putative changes in the gut microbiota’s structure, composition and functional activity might be biomarkers of disease severity.

There are probably several causes of gut dysbiosis during viral respiratory infections; these may include the release of inflammatory cytokines and the reduced food intake (Figure 1). Infection induces substantial weight loss due to a loss of appetite. Pair-feeding experiments in mice clearly indicate that a rapid fall in food intake mimics the changes in the gut microbiota observed during influenza infection [8]. Recent evidence suggests a role for TNFa in inappetence-associated dysbiosis during viral respiratory infection [12]. Type I and II interferons, which are essential for the host antiviral response, also play a part in gut dysbiosis [5,6]. 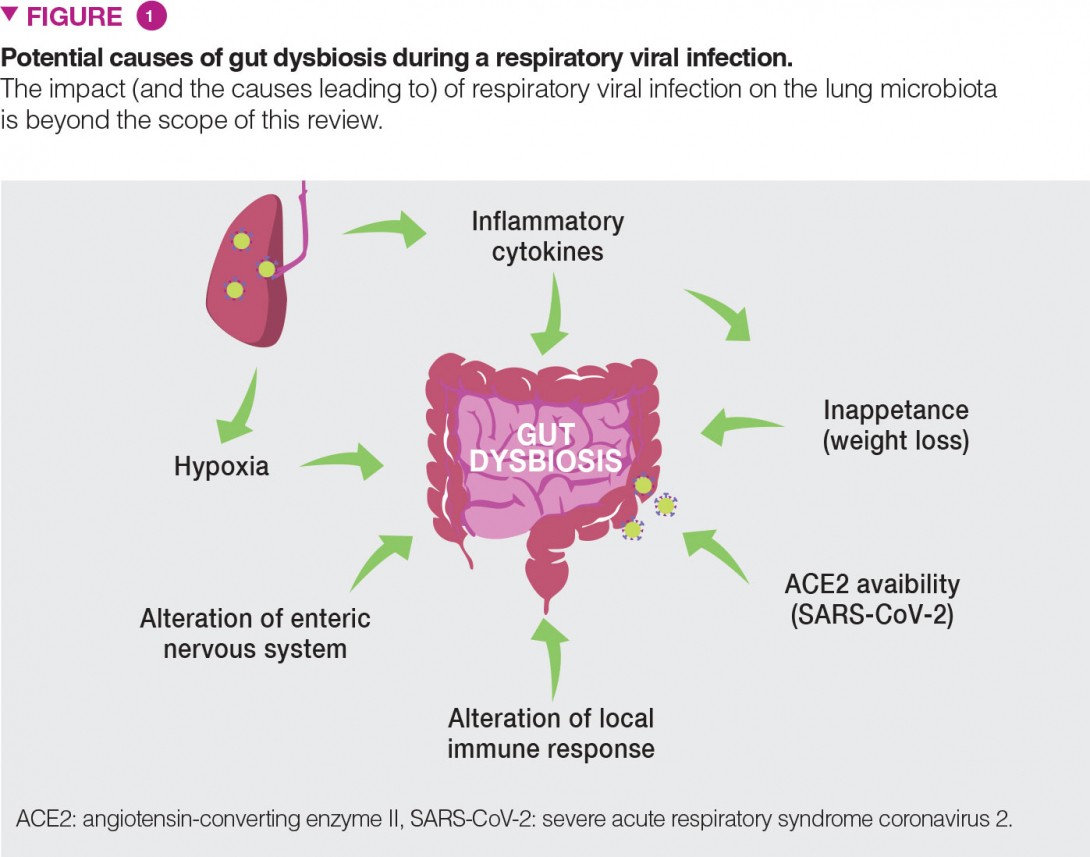 Hypoxia (a feature of acute viral respiratory infection), alterations of the enteric nervous system and dysregulated local immune response are also likely to participate in gut dysbiosis [13] (Figure 1). In the case of COVID-19, along with these mechanisms, local viral replication is likely to play a role in gut dysbiosis. Angiotensin- converting enzyme II (ACE2), the receptor of SARS-CoV-2, is instrumental to maintain the gut’s microbial ecology. Considering the lack of available ACE2 during SARS-CoV-2 infection, one expects that this might influence the composition and functions of the gut microbiota [13].

Gut dysbiosis during viral respiratory infection has local and distal consequences and might be an important contributor of disease severity and fatal outcomes (Figure 2). Patients experiencing viral respiratory infection can develop gastroenteritis- like symptoms such as abdominal pain, nausea, vomiting and diarrhoea. Alterations of the gut microbiota may explain these disorders. It is also likely that altered gut microbiota including the emergence of pathobionts and mucus degrading bacteria play a role in intestinal inflammation and disruption of the gut barrier integrity [6]. In turn, intestinal barrier leakage might increase endotoxin concentrations in the blood, ultimately triggering inflammation, cytokine overproduction and lung dysfunctions [14]. Acute viral respiratory infections can lead to secondary enteric infections and sepsis. Gut dysbiosis (and drop of SCFAs) might be important in this setting. Indeed, SCFAs play a key role in intestinal homeostasis, barrier integrity and control of enteric pathogens [15]. Along with local disorders, our recent data show that gut dysbiosis can remotely hamper host defense in the lungs [9] (Figure 2). In healthy conditions, the gut microbiota remotely arms the lungs against bacterial infection, in part by reinforcing the bactericidal activity of pulmonary macrophages [16]. 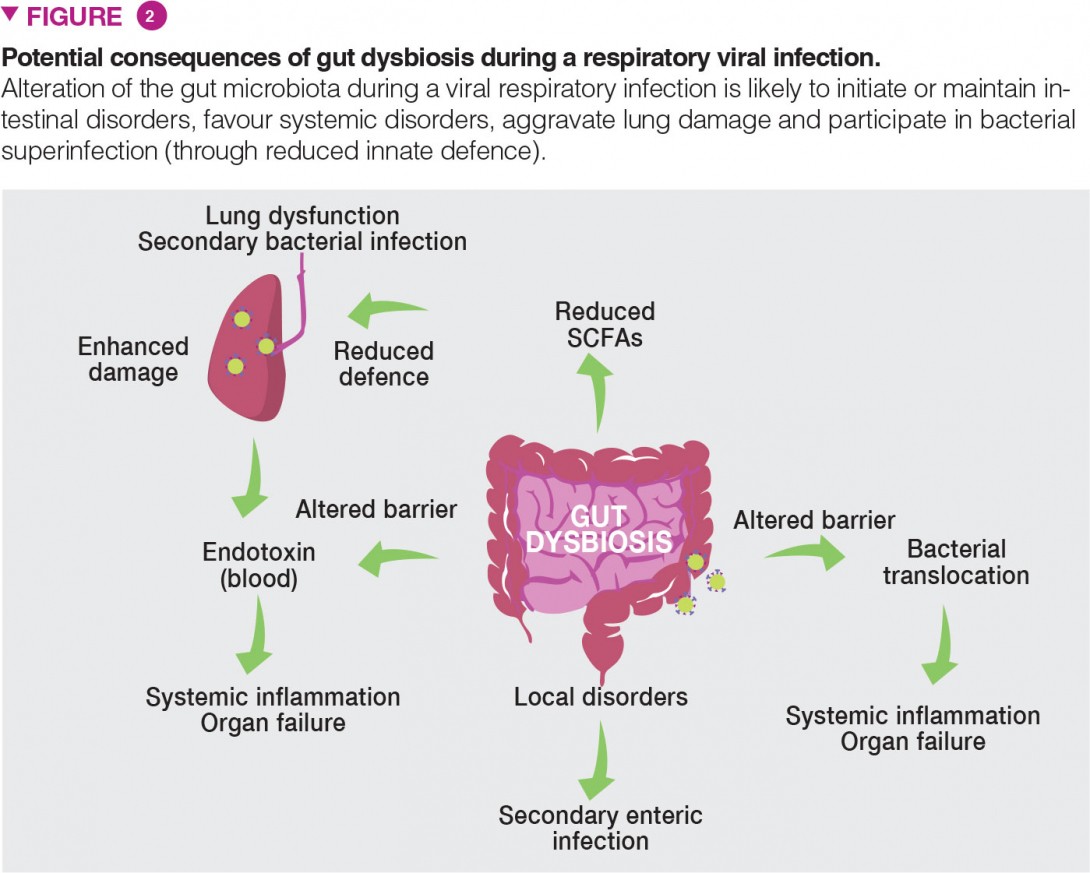 During influenza, this axis is altered and opportunistic bacteria invade the lungs leading to bacterial superinfection, a major cause of death during influenza epidemics and pandemics [1]. We have shown that the reduced production of acetate (the major SCFAs) by the gut microbiota is partly responsible for this effect [9]. Collectively, dysbiosis might influence the gastrointestinal and pulmonary signs and symptoms (and overall mortality) of viral respiratory infections. Can we use the gut-lung pathway as a basis to better control the severity and mortality rate of viral respiratory infections?

The gut microbiota is vital in the lung’s defences against respiratory infection and interventional strategies that target intestinal commensals to preventively arm the lungs against viral pathogens and to protect the microbiota against the perturbations associated with viral infections are of major interest (Figure 3). This is particularly true in individuals with a general imbalance of the gut microbiota such as the elderly and individuals with co-morbidities, well known to be more susceptible to infections. 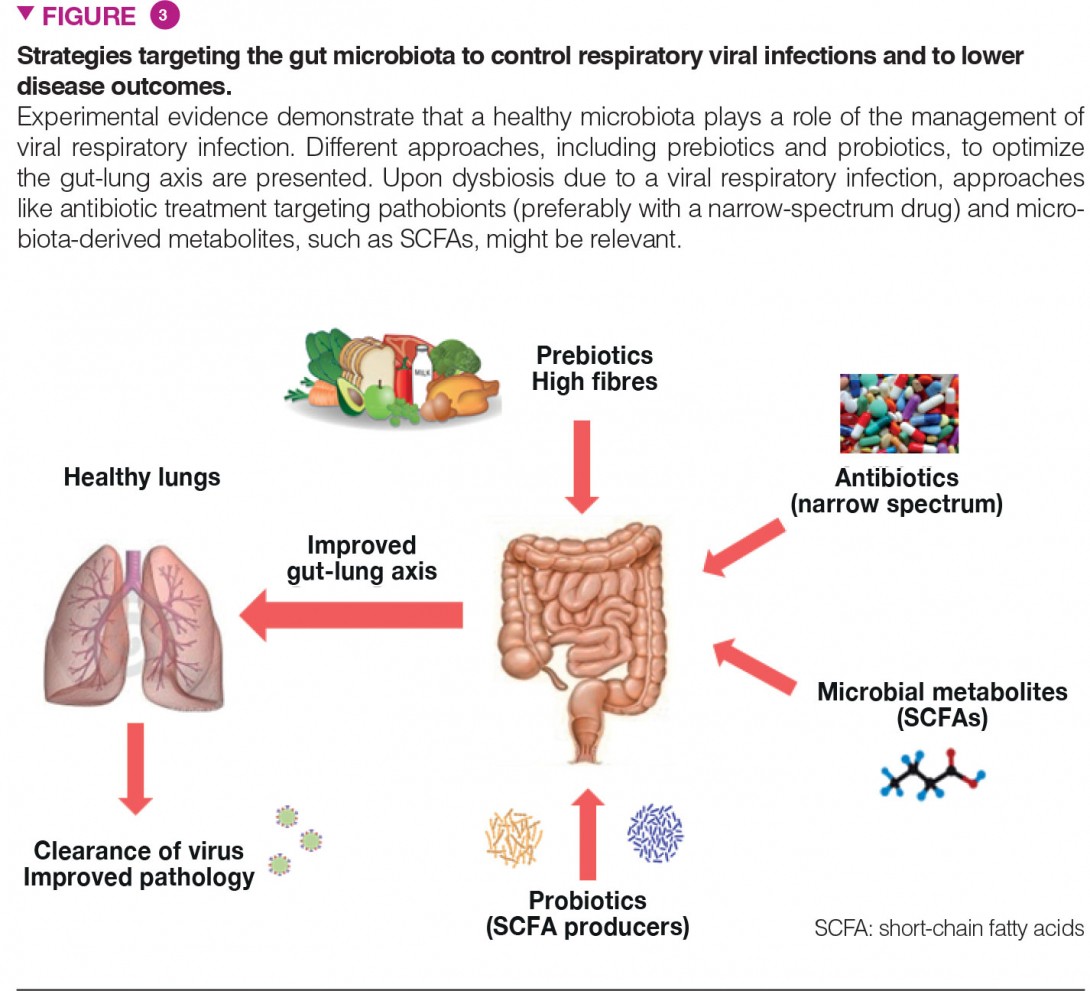 Approaches like (i) dietary ingredients intended to nourish our beneficial microorganisms (like prebiotic fibres) and (ii) indigenous bacteria (known as probiotics) to replenish our gut with missing beneficial microorganisms and to optimize their metabolic functions, might be relevant. These strategies, especially personalized (i.e. based on the analysis of the gut microbiota in the “at risk” population) might improve clinical outcomes and accelerate the recovery of patients that experience acute viral respiratory tract infections. Probiotics, including some Bifidobacteria and Lactobacillus spp, can decrease the severity of influenza infection, through still undetermined mechanisms [17]. Of highly topical concern, a recent study showed that oral bacteriotherapy in addition to the standard drug therapy showed promising clues in the management of COVID-19 patients [18].

The gut-lung axis is important during viral respiratory tract infections. Alterations of the gut microbiota plays a part in secondary outcomes. The gut microbiota therefore represents a target to limit disease severity. Solutions for disease management include dietary ingredients (like prebiotic fibres) and probiotics.

Schizophrenia and aggressive behavior: what involvement of the intestinal microbiota?