Comments on the original article of Romani et al. (Frontiers in Cellular and Infection Microbiology 2020 [1])

In the first weeks of life the microbiota plays a crucial role i n health by acting as a barrier against the invasion of pathogens and by maintaining intestinal immune homoeostasis. Changes in the ecology of the faecal microbiota (FM) have been reported in neonates with intestinal ischaemia. The aim of this study was to describe the FM, the mucosal microbiota (MM) and mucosal immunity in these patients.

The intestinal microbiota of neonates is characterised by lower bacterial diversity and a higher proportion of pathogenic bacteria. Moreover, their intestinal immune system is immature. These two factors modify the intestinal epithelial barrier and enhance the production of pro-inflammatory mediators.

Necrotising enterocolitis (NEC) is an ischemic and inflammatory disorder of the gastro- intestinal tract which affects premature neonates. The physiopathology of NEC remains poorly understood but intestinal dysbiosis is present, and also an inflammatory process. The use of antibiotics and antacids promote dysbiosis and also increases the risk of onset of NEC.

Neonates can also suffer from other ischaemic and inflammatory disorders, such as small bowel volvulus and localised gastro- intestinal perforations.

This single centre pilot study profiled the composition of the FM and MM and also the mononuclear cells of the lamina propria and the pro-inflammatory cytokines of two groups of neonates: full-term or premature. Seven infants had extensive intestinal ischaemia (EII) (5 NEC, 1 small bowel volvulus and 1 total colonic ischaemia) and 7 infants had localised intestinal ischaemia (LII) (4 isolated perforations and 3 cases of intestinal atresia). The FM of 9 full-term infants was used as control. The MM of neonates with EII, compared with those with LII, contained: more Proteobacteria (p = 0.049) and fewer Bacteroidetes (p = 0.007) and Verrucomicrobia (p = 0.01) (Figure 1); fewer Bacteroides, Lachnospiracee, Ruminococcaceae and Akkermansia muciniphila (p < 0.05).

The FM was less diverse (Shannon index) in EII than in LII (p = 0.01). The relative abundance for the MM was similar between EII and LII for Proteobacteria and Firmicutes (p < 0.05). Similarly, a bacterial distribution with more Enterobacteriaceae in EII and more Ruminococcaceae, Bacteroides, Lachnospiracee and Staphylococcaceae in cases of LII. 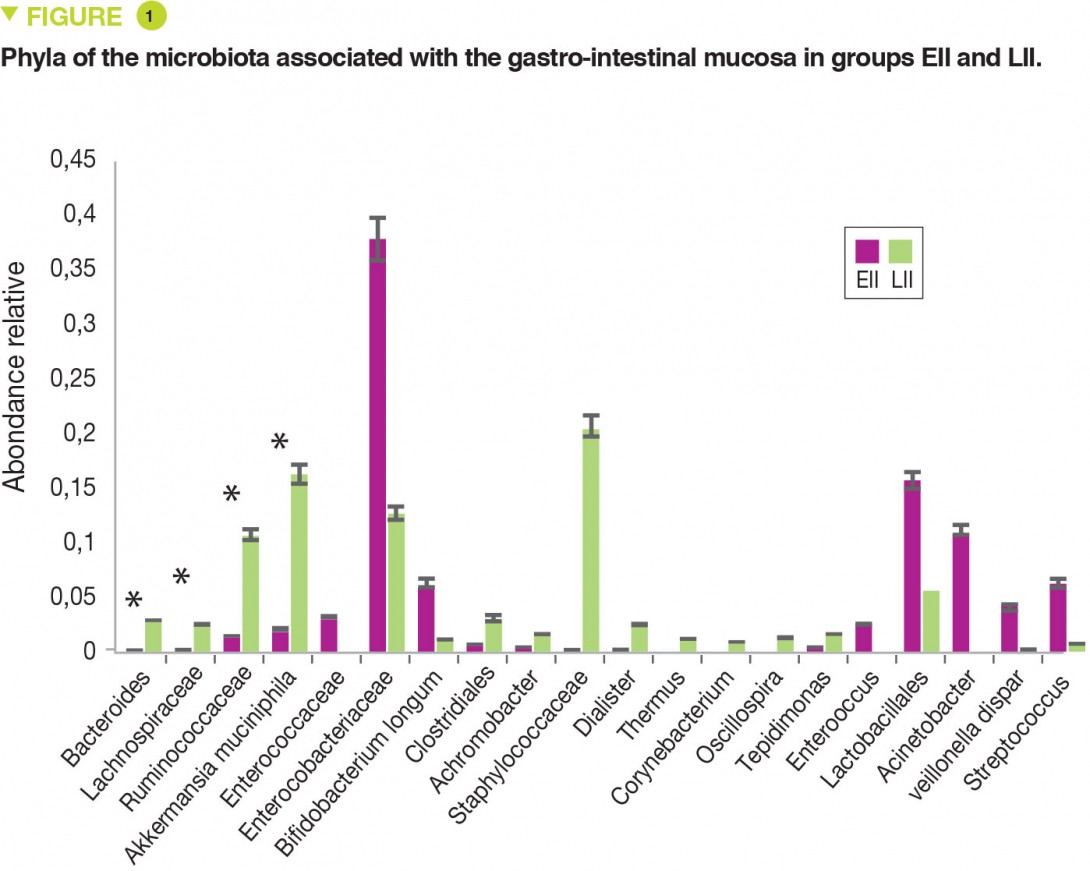 This pilot study confirms that lack of bacterial diversity and the predominance of Enterobacteriaceae are risk factors for NEC, as is a reduction in numbers of Akkermansia muciniphila. Correction of this dysbiosis could modify the TH17/Tregs imbalance and reduce the production of mediators of inflammation (TNFa and INFg).

The faecal microbiota and the gastro-intestinal mucosal microbiota have specific characteristics in premature neonates with ischemic lesions. Additional studies are needed to determine the role of these bacteria in the inflammatory and ischaemic process of NEC.

Autism: link between severity of the disorder and changes in the gut microbiota?

A new generation of antibacterial agents? A plasmid capable of killing pathogenic bacteria

The microbiota as a barrier against rotavirus

Does the nasal microbiota modulate the risk of otitis?

When an infant’s sleep hinges on a few bacteria

Antibiotics and cesarean delivery: how do they affect the newborn microbiota?

Malnutrition: acting on the microbiota in order to improve growth, a trial prototype