The irritable bowel syndrome (IBS) is a common functional bowel disorder characterized by abdominal pain, which is associated with changes in stool frequency and/or stool consistency. While not established yet, the pathogenesis and a multitude of putative pathophysiological mechanisms have been proposed, including: disordered motility, visceral hypersensitivity, low grade inflammation, altered microbiota, immune activation, adverse reactions to foods and central nervous system dysfunction, etc. In 2017, five putative criteria for mechanisms in functional gastrointestinal disorders were published in Gut. Here we discuss to which extent altered gut microbiota fulfills these plausibility criteria in the context of IBS and review the available literature on the subject.

The most common functional bowel disorder, the irritable bowel syndrome (IBS), is characterized by abdominal pain or discomfort and is associated with changes in stool frequency and/or consistency, without identifiable structural or biochemical abnormalities indicating organic disease during routine investigations [1, 2]. Besides abdominal pain, patients also report other gastrointestinal symptoms as bloating, abdominal distention, and flatulence. IBS can be divided into different subtypes, based on the most dominant stool consistency: IBS-C (predominant constipation), IBS-D (predominant diarrhea), and IBS-M (IBS with mixed bowel habits). In terms of pathophysiology, IBS is considered a heterogeneous disorder and different mechanisms have been implicated, including gastrointestinal dysmotility, visceral hypersensitivity, dysfunction of the braingut axis and, more recently, changes in bile salt composition and handling, low-grade inflammation, mucosal immune activation, and altered intestinal microbiota [3].

The last decade has seen a major surge in interest in the role of gut microbiota in IBS. The microbial community of the gut exerts a number of functions, including the metabolism of indigestible polysaccharides, the absorption of certain nutrients and ions, the uptake and deposition of dietary lipids, regulation of bile acid metabolism, and the production of vitamins such as folate,biotin and vitamin K [3, 4]. By competing with microbial pathogens, it reinforces the gastrointestinal barrier protection. While interacting intensely with the mucosa, the gut microbiota also affect the immune system and gut-brain signaling of the host [5]. These diverse properties identify gut microbiota as a potential major contributor to the pathophysiology and as an attractive target for therapy in IBS.

Indeed, multiple mechanisms associated with the gut microbial ecosystem, have been identified in IBS pathophysiological studies. They have led to variable arguments and observations to support the relevance of these individual candidate mechanisms. To advance the field there is a need to identify the level of relevance of such putative pathophysiological processes, as this would enhance the knowledge and may prioritize targets for therapeutic innovation or optimization. A few years ago, a group of international experts developed five plausibility criteria for mechanisms in functional gastrointestinal disorders such as IBS [6]. They are based on aspects such as presence, temporal association, correlation between level of impairment and symptom severity, induction in healthy subjects and treatment response (or congruent natural history if no treatment is possible) (Figure 1). The following sections will evaluate the putative hypothesis that implicate a change in gut microbiota as a mechanism in IBS symptom generation and presentation (Box). The current knowledge regarding gut microbiota in IBS is summarized, and areas for further research are identified.

Figure 1
Plausibility criteria for pathophysiological mechanisms in IBS disorders based on a consensus publication [6], as can be applied for the role of gut microbial mechanisms in the pathogenesis of IBS symptoms.

Plausibility of a pathophysiological role for gut microbiota in IBS

Presence of altered gut microbiota in IBS (A)

The first plausibility criterion is that changes in gut microbiota are found in at least a subset of IBS patients [6]. Several studies have investigated the presence and type of alterations of gut microbiota in IBS compared to healthy controls. Pittayanon and colleagues have published in a 2019 a systematic review of 24 studies from 22 publications comparing gut microbiota of patients with IBS (mainly adult) with microbiota of healthy individuals [7]. They
concluded that family Enterobacteriaceae, family Lactobacillaceae and genus Bacteroides were increased, whereas Clostridiales I, genus Faecalibacterium, and genus Bifidobacterium were decreased in patients with IBS compared with controls [7]. While these observations make a case for altered microbiota in IBS, there is major heterogeneity in findings between different
studies, sample sizes are usually small and most studies occurred in specialized care. Moreover, many studies did not correct statistics for multiple testing and did not consider dietary factors and prior pro- or antibiotic use. Also, no consistent differences were found between IBS stool subtypes [7]. The proportion of IBS patients in whom an altered gut microbiota composition can be identified remains unclear.

Temporal association, of Altered gut microbiota with IBS symptoms (B)

The best evidence for a temporal association between changes in gut microbiota and IBS symptoms can be derived from the clinical entity of post-infection (PI-)IBS [8]. Approximately 10% of patients with infectious enteritis develop PI-IBS with female sex, younger age, psychological distress at the time of the gastroenteritis, and severity of the acute infection as risk factors. Development of PI-IBS is associated with changes in the intestinal microbiome, as well as mucosal alterations (low-grade inflammation, entero-endocrine cell hyperplasia) [8]. However, the changes in microbiota in PI-IBS seem to differ from those described in IBS patients in general.

The fourth plausibility criterion, as described in the initial manuscript [6], is one of the most difficult to fulfill. There are very few suitable data for the different candidate pathophysiological mechanisms, and this also applies to gut microbiota alterations as a mechanism. The most supportive observation is probably derived from development of IBS after treatment of a non-gastrointestinal infection with systemic antibiotics [10]. The nature of the disturbance of gut microbiota after antibiotics, and the degree of similarity with gut microbiota in IBS are still unknown.

This section is the most extensively studied one when considering plausibility criteria for altered gut microbiota composition as a pathophysiological mechanism in IBS. One line of evidence is the beneficial therapeutic effect of poorly absorbable antibiotics, clearly targeting gut microbiota [11, 12]. Two studies with neomycin and five trials with rifaximin showed efficacy of these poorly absorbable broad spectrum in non-constipated IBS patients [11-14]. In addition, a trial evaluating the safety and efficacy of repeat treatment with rifaximin confirmed as well the feasibility of this therapy upon symptom recurrence [15].

Probiotics are defined as preparations with living micro-organisms that confer a health benefit to the host when administered in adequate amounts. Several meta-analysis confirmed the efficacy of probiotics, as a group, to improve symptoms of IBS [11, 16]. However, the heterogeneity of study designs and endpoints, and the relative paucity of studies with specific probiotic types preclude making strong conclusion at the level of individual preparations. In contrast, prebiotics, substrates that are selectively utilized by host microorganisms conferring a health benefit to the host, showed no efficacy in improving IBS symptoms based on recent meta-analyses [11, 17].

Fecal microbiota transplantation (FMT) is probably the most direct way of targeting the gut microbiota for symptom control in IBS [18]. Studies to date have yielded highly variable outcomes, from no effect to symptomatic benefit, but also worsening of symptoms, generating conflicting conclusions in meta-analyses [19, 20]. However, recent studies have shown FMT-induced changes in gut microbiota composition associated with (transient) symptomatic benefit, and have implicated donor selection as a critical issue [21, 22]. 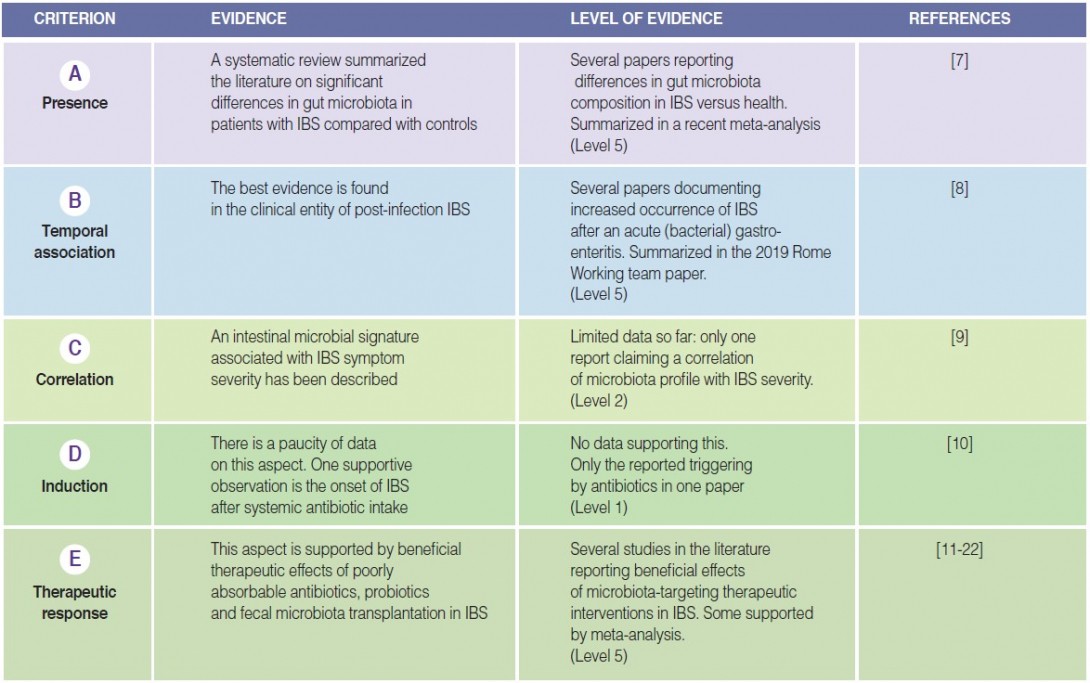 Taken together, changes in gut microbiota composition seem to fulfill the plausibility criteria for pathophysiological relevance in the irritable bowel syndrome [6]. The findings are summarized (Figure 2). However, there is a clear need for additional knowledge and research. More quantitative and better controlled studies characterizing the gut microbiota in IBS and controls are needed, and these should preferably include large patient cohorts also from primary care. This will allow a better understanding of the changes in gut microbiota in IBS at all levels of care, and has the potential to confirm a correlation between the magnitude of changes in gut microbiota composition and IBS symptom severity. In addition, longitudinal studies in IBS will be needed to further establish the temporal relationship between gut microbiota changes and symptom pattern and severity over time, in or outside the frame of a treatment trial.

There is a continued need for higher quality probiotic trials in IBS, using appropriate treatment lengths and validated endpoints, similar to those with pharmacological agents. Finally many new data on the use of FMT in IBS are expected, with a potential to clarify the best modalities and the efficacy of this treatment option.

Plausibility of a pathophysiological role for altered gut microbiota in the irritable bowel syndrome Could the gut microbiome be targeted to optimize Sars-CoV-2 vaccine efficacy?