The fungal microbiota (mycobiota) is an integral part of the complex microbial community colonising the mammalian gastro-intestinal tract and has an important role in immune regulation. Although changes in the mycobiota have been linked to several diseases, including inflammatory bowel disease (IBD), it is currently unknown whether fungal species identified by sequencing represent living organisms and whether specific fungi have effects on the development of IBD. The authors developed a translational platform for the function al analysis of the mycobiome. By combining high-resolution mycobiota sequencing, fungal culturomics and genomics, a CRISPR-Cas9-based fungal strain editing system, in vitro functional immunoreactivity assays and in vivo models, this platform enables the examination of host-fungal crosstalk in the human gut. We discovered a rich genetic diversity of opportunistic Candida albicans strains that dominate the colonic mucosa of patients with IBD. Among these isolates, strains with high immune-cell-damaging capacity (HD strains) reflect the disease features of patients with ulcerative colitis and aggravate intestinal in flammation in vivo through IL-1β-dependent mechanisms. The inflammatory and antifungal responses of interleukin-17A-producing T helper cells (Th17 cells) induced by the HD strains in the gut were dependent on candidalysin, the peptide toxin secreted by C. albicans during the transition from a benign commensal to a pathobiont state. These findings reveal the strain-specific nature of host-fungal interactions in the human gut and highlight new diagnostic and therapeutic targets for IBD.

Studies based on deep sequencing of the gut mycobiota in several cohorts of patients supply coherent evidence that «fungal dysbiosis» is a characteristic of chronic inflammatory bowel disease (IBD) [2], the most widespread forms of which are Crohn’s disease (CD) and ulcerative colitis (UC), which affect millions of individuals worldwide. Anti-Saccharomyces cerevisiae antibodies (ASCA), directed against the mannans presented by the cell wall of fungi, define sub-types of IBD, because their presence in the serum is associated with CD but not with UC, which establishes an additional link between fungi and IBD. Candida is the most widespread fungal genus, and its presence is systematically increased in several cohorts of patients with IBD analysed by sequencing of the faecal microbiota [2].

In particular, C. albicans in the gut induces a set of antifungal antibodies and acts as an immunogen for ASCA. Candida species associated with the gut mucosa are detected by the macrophages present in the gut and have been shown experimentally to have the potential to induce protective immunity or to trigger inflammation, depending on the context [3]. Despite this evidence, it is currently unknown whether the fungi detected by sequencing technologies in the human gut have an essential role in the orientation of mucosal immunity or in the evolution of inflammatory disease in each individual patient. A lack of correlation has been repeatedly observed between changes in the composition of the mycobiota and the seriousness of the disease in IBD patient cohorts, despite a constant increase in Candida species. The authors have therefore emitted the hypothesis that the functional diversity of Candida strains determines the host-fungal relationship in human gut mucosa with an effect on intestinal inflammation.

In agreement with numerous other studies, the authors first observed that the mycobiota of patients with UC were rich in Candida albicans and, in contrast, poor in Saccharomyces. In the situation of impaired immune response induced by corticosteroid therapy, C. albicans exacerbates the severity of colitis in mice. The authors then isolated several strains of C. albicans from the mycobiota of healthy subjects and from patients with UC and observed a wide heterogeneity in terms of pro-inflammatory capacity. In particular, the capacity of causing cell damage to the macrophages, which are a key defence against fungi, varies from one strain to another. The strains able to inflict cell damage to the macrophages have a greater tendency to filament and have pro-inflammatory effects in vivo by inducing a Th17 response (Figure 1). The authors then showed that a large part of the pro-inflammatory effects were mediated by the secretion of a toxin, candidalysin, and the induction of IL-1β production. Subsequent analyses revealed a strong correlation between the pro-inflammatory capacity of strains isolated from patients with UC and the inflammatory activity of the disease. On the other hand, there was no correlation between the magnitude of intestinal inflammation and the overall abundance of Candida albicans in the patients. These results explain why the composition of the mycobiota is poorly correlated to the characteristics of human pathologies and suggest that the functional capacities (pro-inflammatory in this case) may provide a better explanation of the role of the mycobiota in these pathologies. 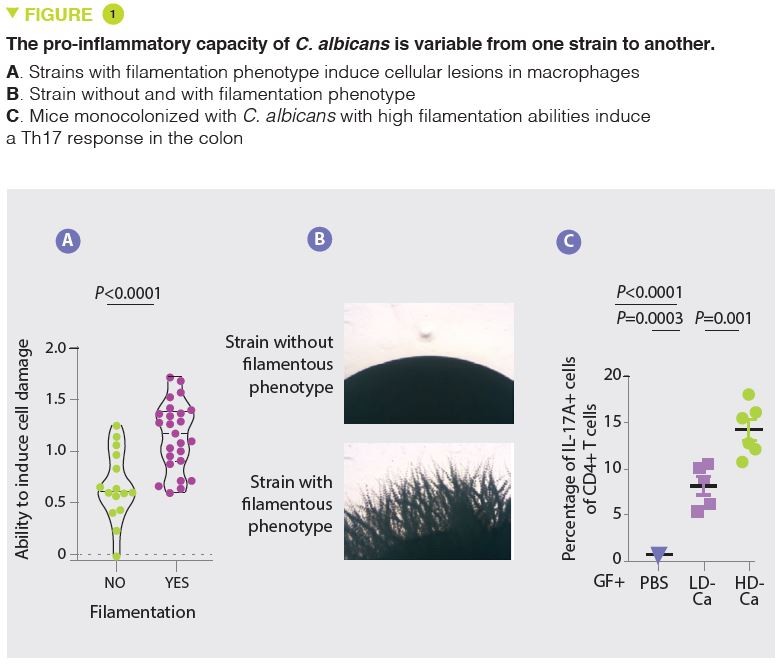 This study shows that, in addition to analyses of the composition of the mycobiota, in particular by sequencing, a functional analysis is necessary to understand its contribution to the disease and in particular in IBD. If pro-inflammatory strains of C. albicans, candidalysin and IL-1β are confirmed to have a role in UC, we can imagine a therapeutic option which targets one of these elements, especially as several molecules which antagonise the IL-1β pathway are already available.

Association between IBD and greater amounts of microplastics in stool
Gastroenterology