The mechanism of FMT: transplanting to restore the balance

Although the media only recently became interested in this topic, fecal microbiota transplant is actually a very old medical practice. Its history goes all the way back to 4th-century China. It was then called “yellow soup” and was used to treat diarrhea and food poisoning. But the first experiment with a fecal enema was only conducted in 1958. In 2013, 45 years later, the results of the first clinical trial on FMT were published, demonstrating that it is superior to antibiotics in the treatment of recurrent Clostridium difficile infections1, a bacterium which is responsible for 20 to 30% of antibiotic-associated diarrhea that can sometimes be severe. It was the start of the craze towards FMT, first from researchers and later from the general public.

It consists in administering microorganisms found in the stools of a healthy donor to restore the gut microbiota of a patient suffering from a disease associated to a disruption in the gut microbiota. Although FMT has only one approved indication so far–i.e. the treatment of recurrent Clostridium difficile colitis–the research is now focused on other therapeutic avenues: some gastrointestinal disorders, autism, obesity, depression, etc., with mixed results2. How is FMT regulated? What are its potential future uses and its limits?

The gut microbiota (or gut flora) is an organ in its own right, made of billions of microorganisms (bacteria, fungi, viruses...) constantly interacting with each other as well as with the organism they are colonizing (host). In the colon, microorganisms fiercely compete for available space and food, but they also work closely together to digest large molecules. As a treatment for Clostridium difficile infection, FMT is based on four mechanisms of action3: 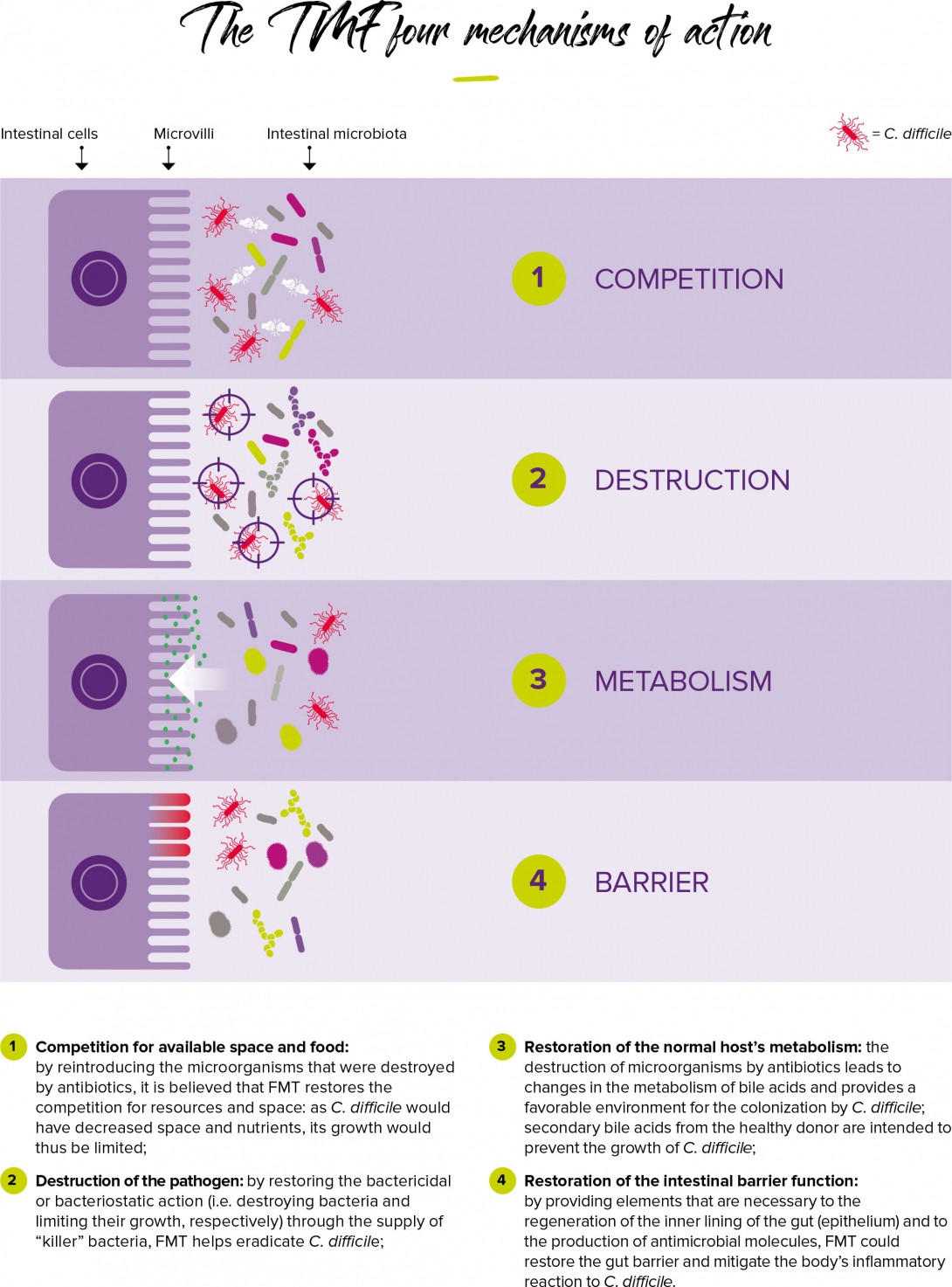 1 A relapse of C. difficile infection is defined by the return of symptoms associated to this bacterium and the presence of its toxins in patient’s stool within 8 weeks following the end of a well-conducted treatment and without further antibiotic treatment that could have triggered it (Sources: Sokol H. Transplantation fécale. Post’U(2018)

Fecal transplant
Fecal microbiota transplant
FMT, in practice: from the donor to the side effects
Focus

The mechanism of FMT: transplanting to restore the balance FMT, in practice: from the donor to the side effects

Proven efficacity for a single indication

When sweeteners undermine blood sugar control and disrupt the microbiota

Osteoporosis: how the microbiota can weaken bones