Recent scientific publications have provided new data highlighting the key role of microbiota on women’s health. Biocodex Microbiota Institute is launching a set of expert interviews dedicated to microbiota, women and health. What do we already know about woman’s health and microbiota? What do we still have to discover?

What is menopause? When does it occur? What are the main symptoms?

Prof. Ina Schuppe Koistinen: Menopause is the time in a women’s life that marks the end of the reproductive period while for most many years of life remain. Menopause is defined retrospectively after a woman has ceased menstruation for 12 months.

Signs and symptoms of the menopause transition can vary widely among women. Many women experience irregular periods before they end. Other symptoms include hot flashes and chills, night sweats, sleep problems and mood changes. Low sex hormone levels increase signs of age, such as thinning hair, dry skin and loss of breast fullness. Genitourinary symptoms include vaginal atrophy and dryness.

The menopausal transition occurs over a time period of several years starting in the age between 40 to 50. During that time, also called perimenopause, the ovaries decrease their production of the female sex hormones estradiol and progesterone. After the final menstruation, ovarian follicles are depleted, and sex hormone levels stay low. However, it is crucial to remember that many women witness that life after 50 is their best time, with more freedom, no menses, no (sidenote: Premenstrual symptoms This refers to the symptoms women can experience in the weeks before their period (breast pain, mood swings, irritability, depression, fatigue…) Gudipally PR, Sharma GK. Premenstrual Syndrome. 2022 Jul 18. In: StatPearls [Internet]. Treasure Island (FL): StatPearls Publishing; 2022 Jan ) or pregnancies.

How does the vaginal microbiota evolve during menopause?

I. S.-K.: The vaginal microbiota in healthy women during the fertile years is dominated by (sidenote: Lactobacilli Rod-shaped bacteria whose main characteristic is the production of lactic acid, from where they get the name “lactic acid bacteria”.  Lactobacilli are present in the oral, vaginal and gut microbiota of humans, but also in plants and animals. They are found in fermented foods, such as dairy products (e.g. certain cheeses and yoghurts), pickles, sauerkraut, etc. Lactobacilli are also found in probiotics, with certain species recognized for their beneficial properties.   W. H. Holzapfel et B. J. Wood, The Genera of Lactic Acid Bacteria, 2, Springer-Verlag, 1st ed. 1995 (2012), 411 p. « The genus Lactobacillus par W. P. Hammes, R. F. Vogel Tannock GW. A special fondness for lactobacilli. Appl Environ Microbiol. 2004 Jun;70(6):3189-94. Smith TJ, Rigassio-Radler D, Denmark R, et al. Effect of Lactobacillus rhamnosus LGG® and Bifidobacterium animalis ssp. lactis BB-12® on health-related quality of life in college students affected by upper respiratory infections. Br J Nutr. 2013 Jun;109(11):1999-2007. ) species that protect the vagina from overgrowth of other organisms.

The composition of the vaginal microbiota is influenced by estrogen that promotes the proliferation of vaginal epithelial cells and increases glycogen storage, the main nutrient for lactobacillus growth. With decreasing levels of estrogen during the menopausal transition, the diversity of the vaginal microbiota increases while lactobacilli decrease1,2.

What are the missions of Lactobacillus?

How to take care of it?

Urinary tract infections are common among menopausal women. What’s the link with microbiota?

I. S.-K.: Women after menopause often suffer from urinary tract infections. Clinical data3 suggest an impact of estrogen on the pathogenesis of those infections. The low estrogen levels induce structural changes such as increased residual urine volume and changes in the vaginal microbiota as described above. Both are well documented risk factors for urinary tract infections. Local supplementation with estrogen can at least partly reverse these changes by the re-establishment of a lactobacilli-dominated vaginal microbiota and improved epithelial cell growth in the urogenital tract4.

I. S.-K.: There are very few research studies in the scientific literature that have described the changes of the gut microbiota after menopause transition. So far, data5 from samples including less than 200 women have been analyzed to study the effect of menopause on the gut microbiota and few changes have been detected. More high-quality studies with samples from thousands of women are needed to describe and understand the effect.

Why is it that important for your health?

Any advice to taking care of its microbiota (vaginal, gut) during this period?

I. S.-K.: My advice is to take good care of your general health by lifestyle choices that promote a healthy microbiota. Taking good care of the gut microbiota will help you to keep a healthy vagina. Eat a varied diet rich in fiber and fermented foods, stay physically active and spend time in nature. Do not smoke and keep your alcohol consumption low, avoid the use of antibiotics if possible.

Regarding the vaginal microbiota, avoid washing your vulva with soap and antiseptics, never rinse your vagina with perfumes or detergents as it cleans itself by its continuous discharge. Wash with lukewarm water or with perfume- and soap-free cleaning products. Use a neutral vegetable oil to keep the sensitive mucosal membranes of your vulva lubricated. Practice safe sex and if you experience dryness in your vagina use lubricants when having sex and consider a local treatment with an estrogen-containing cream.

Do not hesitate to contact your gynecologist if you experience severe symptoms of menopause transition and your quality of life is affected.

Hormone therapy is used to treat menopause-related conditions and symptoms. Could prebiotics and probiotics complete this treatment?

Essential information for understanding and choosing them correctly

Prebiotics and probiotics could potentially contribute to a restoration of the vaginal microbiota to the state prior to menopause. This would require probiotics containing the right strains of Lactobacillus crispatus that are associated to good vaginal health. 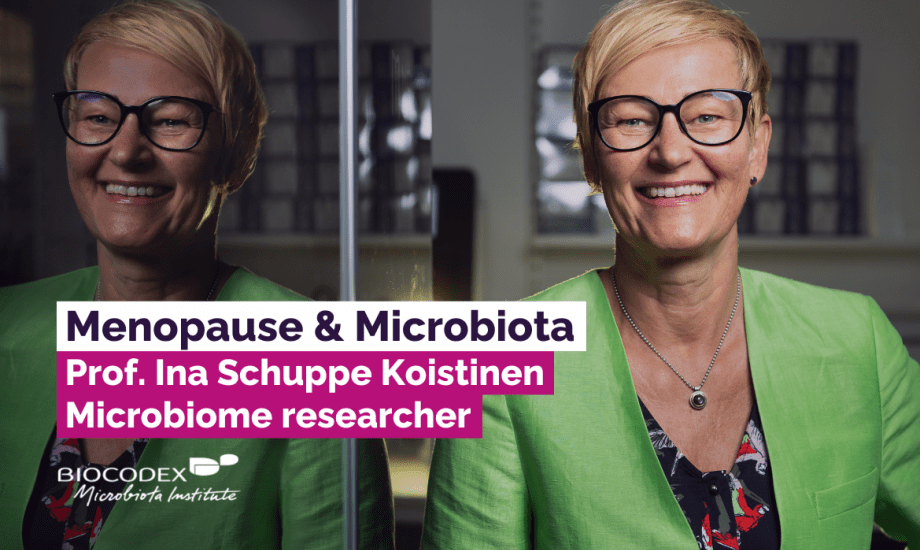 Endometriosis and microbiota: is there a link?
Created 27 September 2022

The vaginal microbiota: how to take care of it? Hundreds of bacteria populate the vagina.1 Let’s see how t...

Fecal transplant involves introducing a healthy person’s stool into a patient’s digestive tract in order to...

Breast cancer is the most common female cancer in the world. In addition to genetic factors and already ide...

Are certain women predisposed to STIs?

Gonorrhea: lactobacilli to the rescue?