Recent scientific publications have provided new data highlighting the key role of the vaginal microbiota on women’s health. Biocodex Microbiota Institute is launching a set of expert interviews dedicated to microbiota, women and health. What do we already know about woman’s health and microbiota? What do we still have to discover?

What is exactly the vaginal microbiota and what is its role?

Prof. Ina Schuppe Koistinen: The vaginal microbiota is defined as the complex ecosystem of (sidenote: Microorganisms Living organisms too small to see with the naked eye. This includes bacteria, viruses, fungi, archaea, protozoa, etc., collectively known as ’microbes’. Source: What is microbiology? Microbiology Society. ) , including bacteria, virus and fungi, that live inside the vagina and has biologically evolved to help protect the female reproductive system.

Unlike in the gut, a healthy vaginal microbiota has low diversity and is dominated by Lactobacillus species. Lactobacilli protect the vagina from overgrowth of other organisms by keeping the vaginal pH low by production of lactic acid, production of antimicrobials such as H2O2 and bacteriocins. They also compete for nutrients, adhere tightly to the mucosal membrane and modulate the local immune system.

How does the vaginal microbiota change during the menstrual cycle?

I. S.-K.: We know that a healthy vaginal microbiota is resilient to changes such as menstruations, sexual activities and hormonal fluctuations. For most but not all women, the vaginal microbiota remains relatively stable during periods. Menstrual blood, increases pH and adds nutrients to vaginal bacteria like Gardnerella or Prevotella that are associated to an unbalanced vaginal microbiota (what we call a (sidenote: Dysbiosis Generally defined as an alteration in the composition and function of the microbiota caused by a combination of environmental and individual-specific factors. Levy M, Kolodziejczyk AA, Thaiss CA, et al. Dysbiosis and the immune system. Nat Rev Immunol. 2017;17(4):219-232.   ) ).

So, there is an effect during bleeding when the vaginal microbiota gets more diverse1 but normally, it will recover when the menstrual phase is over (that’s what we call “resilience”).

Periods: don’t underestimate the power of your diet!

Many women describe having gastrointestinal (GI) symptoms throughout their periods (bloating, abdominal pain, diarrhea…). Did you know that a healthy diet can relieve a painful digestive system associated with menstruation? Vegetables, fruits and fermented foods rich in Bifidobacteria and Lactobacilli, food rich in fibers and with anti-inflammatory properties can be beneficial for your gut microbiota. Perfect moment to test kimchi and sauerkraut if you are still not convinced!

Is there a link between painful periods and microbiota?

I. S.-K.: Once again, unfortunately there is very little research on that topic. In a study from Sweden3, 50% of adolescent girls reported pain during their periods, almost 40% severe pain. Research has shown that women with period pain have high levels of prostaglandins, hormones known to cause cramping abdominal pain.

50% of adolescent girls reported pain during their periods.

At this point, we don’t know if the microbiota is involved. We have to enhance research because girls have always been told that it is normal to have period pain. But it is not normal! We have to investigate factors associated with menstrual pain to relieve women and improve the diagnosis of endometriosis. According to Forbes, only 4% of all R&D funding in Pharma is dedicated to specific women’s health issues which is quite discouraging… I’m convinced that we need to raise awareness on this topic, it’s my mission!

Is there any risk of increased vaginal infections during the menstrual cycle? Is it linked to my microbiota?

I. S.-K.: The risk of vaginal infections (Candida infections or bacterial vaginosis) increases during periods and this is linked to the vaginal microbiota. As I have already explained, the menstrual blood creates an environment that favors the growth of pathogenic bacteria, leading to (sidenote: Dysbiosis Generally defined as an alteration in the composition and function of the microbiota caused by a combination of environmental and individual-specific factors. Levy M, Kolodziejczyk AA, Thaiss CA, et al. Dysbiosis and the immune system. Nat Rev Immunol. 2017;17(4):219-232.   ) .

72 million women around the world have to manage their periods without a decent toilet.

According to (sidenote: Sources ) , 72 million women around the world have to manage their periods without a decent toilet. In addition, women may not be able to afford hygiene protection and are at increased risk for infections. Both resources and education are needed to improve the situation.

Sex during periods: does it have an impact on the vaginal microbiota and the risk of infections?

I. S.-K.: Having sex during periods is totally fine, but if your vaginal microbiota is more susceptible to dysbiosis, the use of condoms is recommended. All sex practices where body fluids are exchanged can worsen the vaginal dysbiosis. A dysbiotic vaginal microbiota makes you more susceptible to sexually transmitted infections by bacteria, such as chlamydia and gonorrhea, and viruses, such as human papillomavirus (HPV) or HIV4-6.

Any advice on how to take care of your vaginal microbiota during periods?

I. S.-K.: The first advice I will give is that every woman should choose the product she is comfortable with. It will help her to manage her periods in a good way, to feel comfortable and safe. It is important to choose a product that matches your blood flow.

Then, there are very simple rules to follow: change your tampon or your menstrual cup (you need to sterilize it before insertion) every 4-6 hours to limit the risk for (sidenote: Toxic-shock syndrome This is a rare but life-threatening condition caused by bacteria getting into the body and releasing harmful toxins, and associated with tampon and or cup use. Sources. ) 7. Wash your hands before inserting your hygienic protection, avoid tampons or pads with perfume and other kinds of chemicals. Your vagina cleans itself with its own discharge, there is no need for vaginal douching. Wash your vulva with lukewarm water, a soap-free cleaning solution or perfume free oils and do not use antimicrobials that can disturb your microbiota. Practice safe sex and be nice to your vulva and vagina, not too much soap and perfume, that is the best advice I can give! 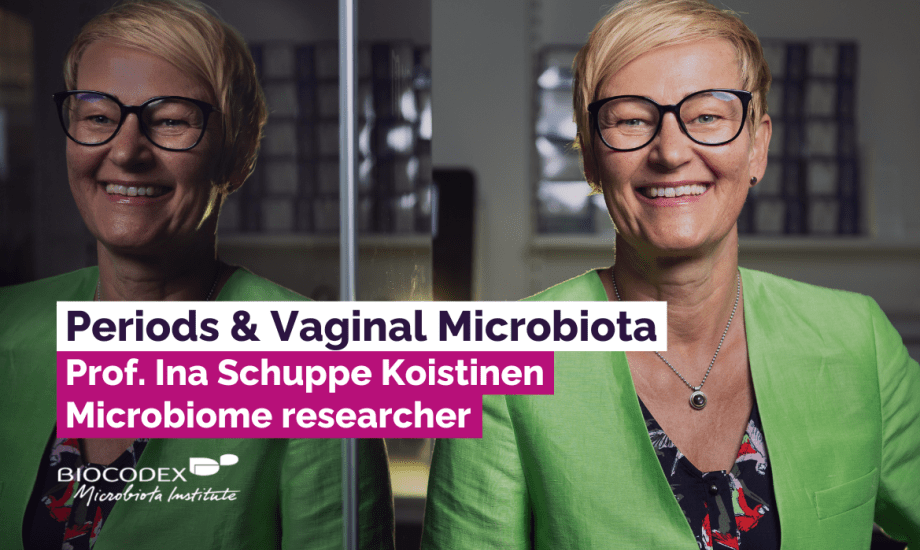 2. FAST FACTS: Nine things you didn't know about menstruation_Unicef_25 May 2018.

Endometriosis and microbiota: is there a link?
Created 11 January 2023

The vaginal microbiota: how to take care of it? Hundreds of bacteria populate the vagina.1 Let’s see how t...

Fecal transplant involves introducing a healthy person’s stool into a patient’s digestive tract in order to...

Breast cancer is the most common female cancer in the world. In addition to genetic factors and already ide...